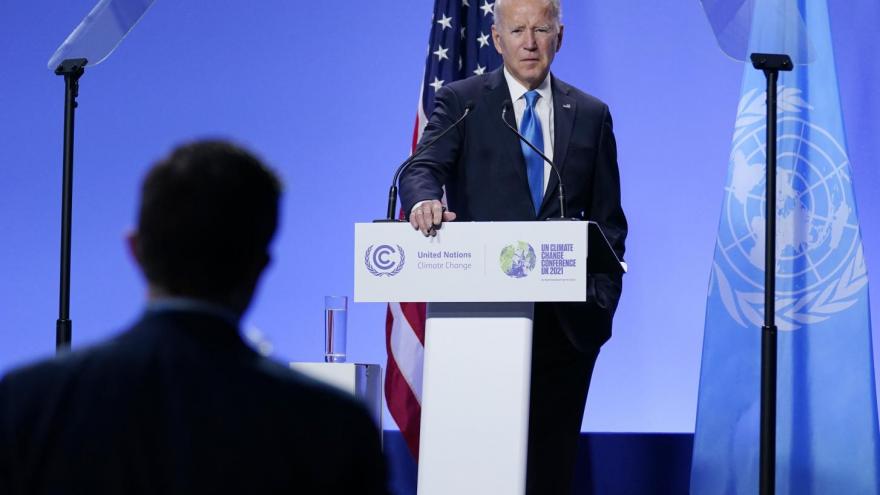 President Joe Biden said Tuesday that he is not concerned with the possibility of an armed conflict with China, adding that he's made clear to Chinese President Xi Jinping that this is "competition" not "conflict."

(CNN) -- President Joe Biden said Tuesday that he is not concerned with the possibility of an armed conflict with China, adding that he's made clear to Chinese President Xi Jinping that this is "competition" not "conflict."

"Am I worried about an armed conflict or something happening accidentally with China? No, I'm not," Biden told CNN's Phil Mattingly while speaking at his closing press conference at the COP26 Summit.

Biden said that at his upcoming -- but not yet set--- virtual summit with Xi that he would continue to make clear, "This is competition. It does not have to be conflict."

"There's no reason there need to be conflict. But I've also indicated to him, so I'm not reluctant to say it publicly, that we expect him to play by the rules of the road," Biden said, adding the US would not change its stance on several issues, including international sea lands.

"I'm not looking for, I don't anticipate there will be a need for physical conflict, but you know, as you've heard me say this before, my dad had an expression, 'The only conflict worse than one that's intended, is one that's unintended," Biden added.

Asked about China, Russia and Saudi Arabia not attending the COP26 Summit in person, Biden said that it was a "problem" but that the US doing so had "a profound impact on the way the rest of the world is looking at the United States and its leadership role."

Xi and Russian President Vladimir Putin, two counterparts who Biden desperately hopes to personally engage as he works to prevent already-tense relationships from deteriorating further, did not attend either major summit this week.

The given reason for Xi and Putin's absences at the summits is the ongoing Covid pandemic. Cases are spiking in Russia, and Xi hasn't left China in 21 months as the virus spread across the world. Visiting the summits may also have subjected Xi to his country's quarantine requirements, which would have made attending an upcoming party congress meeting difficult.

White House officials have said the absence of Putin and Xi at the summits was not, in fact, a lost opportunity. Instead, they suggest the void has allowed the United States and European leaders to set the agenda and drive discussion on topics important to them, like climate and combating the global pandemic.

Yet on nearly every major issue up for discussion this week -- climate, Covid, an energy crunch, supply chain clogs, Iran's nuclear ambitions -- western nations must work with Russia and China to make any significant progress. And Biden, who has voiced a preference for in-person summits, is deprived of a critical opportunity to wield his trademark brand of personal diplomacy on some of the world's stickiest conundrums.

On Tuesday, Biden said staying at home may have cost Xi some influence on the world stage.

"By showing up we've had a profound impact on the way I think the rest of the world is looking at the United States and its leadership role. I think it's been a big mistake quite frankly for China," Biden said.

"The rest of the world is going to look to China and say what value added are they providing and they've lost in building influence people around the world and all the people here at Cop."