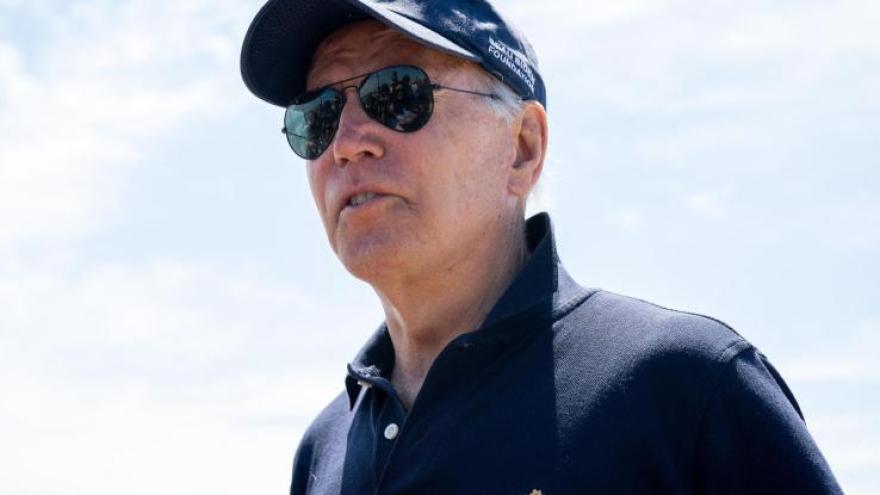 US President Joe Biden pictured in, Delaware, June 20 says he hopes to decide soon whether to support a temporary pause in the federal gasoline tax and is nearing a decision on student loan relief as he looks to ease the burden of high prices on Americans.

(CNN) -- President Joe Biden said Monday he hopes to decide soon whether to support a temporary pause in the federal gasoline tax and is nearing a decision on student loan relief as he looks to ease the burden of high prices on Americans.

"I hope to have a decision based on the data I'm looking for by the end the week," Biden told reporters by the seaside in Rehoboth Beach, Delaware, when asked whether he was considering backing a gas tax holiday.

Such a pause in the 18.3-cent-per-gallon federal tax would require Congress to act, and there has been little traction among lawmakers on the idea so far. But the administration is eager to find areas of relief for American consumers contending with skyrocketing gas prices as the summer begins. Monday's nationwide average for gas was just under $5 per gallon.

Biden said he is also weighing whether to back sending Americans gas rebate cards: "That's part of what we're considering, that's part of the whole operation," he said.

And questioned whether he was close to deciding on forgiving student debt, fulfilling one of his campaign promises, Biden said: "Yes."

The array of options currently up for discussion at the White House reflects the urgency behind the scenes to come up with ways to alleviate soaring costs for Americans. Biden has implored his team to search for areas where he take action to reduce financial burdens as the price of gas, food and other goods soars.

Also under active consideration: Easing certain tariffs on China, which could bring down the cost of some consumer goods.

The White House has previously downplayed the prospect of sending gas rebate cards directly to Americans because the program would be difficult to administer. But Biden seemed to indicate the idea was still in play, declining to rule it out to reporters on the beach.

High prices and the prospect of a recession are looming over Biden's presidency, threatening Democrats' political prospects in November's midterm elections.

Yet as waves crashed nearby in Rehoboth, Biden downplayed the risk of a recession as the Federal Reserve raises interest rates in an attempt to tame inflation.

Several lawmakers and governors have floated the notion of a gas tax holiday, encouraging Biden to get behind the idea. Others, including some Democrats, have been more skeptical. And the idea has yet to gain significant traction in Congress, where a bill is pending but hasn't yet come up for a vote.

Over the weekend, the US Energy and Treasury secretaries each said it was a worthy option, though not a cure-all for high gas prices.

"It's one of the tools," Energy Secretary Jennifer Granholm told Dana Bash on CNN's "State of the Union."

"It's certainly one of the things the President is evaluating," she added. "I know this is what's been happening in many states as well. Honestly, the whole array of tools are still being pressed. He's used the biggest tool that he has, but he's obviously very concerned about this continued upward pressure on prices."

She said a challenge in temporarily suspending the roughly 18-cent-per-gallon tax was that "it funds the roads."

The so-far lukewarm administration approach to supporting a suspension of the federal gasoline tax reflects concerns among some Democrats that it may not provide significant relief, particularly if retailers raise the base price per gallon to make up the difference.

"I'm no fan of the gas tax holiday. I think that`s kind of a gimmick, and eventually you have to reverse it," said Larry Summers, a Treasury Secretary to President Bill Clinton, on NBC's "Meet the Press."

As it happens, Biden told reporters a day later he'd spoken that morning to Summers, who has criticized the administration for its approach to inflation and has warned a recession may now be inevitable.

'There's nothing inevitable about a recession," Biden insisted.

Biden said he was confident in congressional action reducing the costs of Medicare and insulin -- both items under negotiation now -- as well as new investments in renewable energy.

He said major oil and gas CEOs would be meeting with members of his administration this week to discuss prices "so I can get an explanation of how they justify making $35 billion in the first quarter."

But he ruled out meeting the executives himself: "No."

And he criticized the companies for cutting back on refining.

"I want an explanation from them on why they aren't refining more oil," he said.