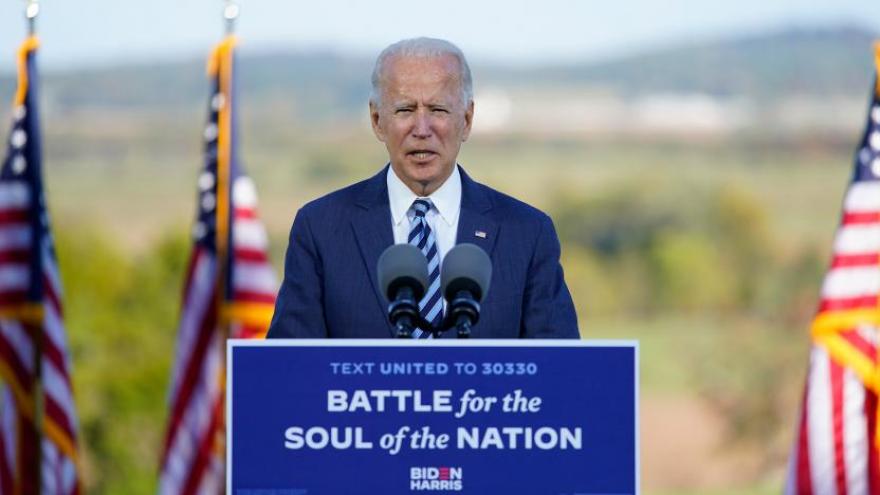 (CNN) -- Democratic presidential nominee Joe Biden again ducked questions Thursday about whether he would seek to add seats to the Supreme Court, telling reporters he would not address the issue until after the November 3 election.

"They'll know my opinion on court-packing when the election is over," Biden said in Arizona, where he was campaigning with his running mate, Sen. Kamala Harris of California.

"Now, look, I know it's a great question, and y'all -- and I don't blame you for asking it. But you know the moment I answer that question, the headline in every one of your papers will be about that."

Biden's non-answer comes as President Donald Trump and the Republican-controlled Senate seek to confirm Judge Amy Coney Barrett to replace the late Justice Ruth Bader Ginsburg on the Supreme Court. If they succeed, the court would have a 6-3 conservative majority.

"The election has begun," Biden said Thursday. "There's never been a court appointment once an election's begun. What, 4 million or so people have already voted. They're denying the American people the one shot they have, under constitutional law, to be able have their input, and that is picking" Ginsburg's replacement.

Biden and Harris both refused to answer the question in their debates with Trump and Vice President Mike Pence.

For the Democratic ticket, the politics around the subject are tricky: Many in the party feel that Republicans have effectively stolen one, and soon two, seats on the Supreme Court, putting in place a conservative majority that could block progressive policies for years. Progressives have said the only way Democrats can get around intransigent Republicans on Capitol Hill is through changes such as adding seats to the court -- therefore narrowing or eliminating the conservative majority -- and eliminating the Senate's 60-vote threshold to break a filibuster, which Republicans used to block legislation during Obama's presidency.

But Biden, a former longtime senator, is an institutionalist who has centered his campaign on a return to normalcy and civility. Polls show he is winning over moderates, and he is hesitant to give Trump any new ammunition to link him to his party's progressive wing.

Pence pressed Harris to address whether she and Biden would seek to add seats to the Supreme Court in Wednesday night's vice presidential debate, but Harris would not answer.