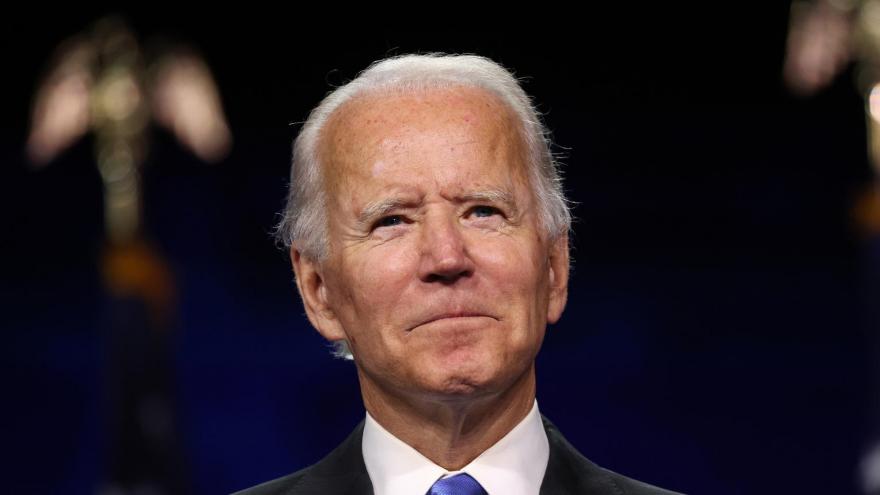 Democratic presidential nominee Joe Biden said, if elected, he would be willing to shut down the country again should there be a second wave of coronavirus in the US and scientists recommend the move to slow its spread.

(CNN) -- Democratic presidential nominee Joe Biden said, if elected, he would be willing to shut down the country again should there be a second wave of coronavirus in the US and scientists recommend the move to slow its spread.

"I would shut it down. I would listen to the scientists," the former vice president told ABC News' David Muir during a joint interview with his running mate Sen. Kamala Harris set to air in full Sunday night.

Biden said he would "be prepared to do whatever it takes to save lives, because we cannot get the country moving until we control the virus."

He called it the "fundamental flaw" of the Trump administration's handling of the pandemic, which has claimed the lives of more than 175,000 Americans.

"In order to keep the country running and moving, and the economy growing, and people employed, you have to fix the virus," Biden told ABC. "You have to deal with the virus."

On Saturday evening, Trump responded on Twitter and mischaracterized Biden's remarks, not mentioning Biden's qualification that he would shut down the country if scientists made the recommendation.

"Despite biggest ever job gains and a V shaped recovery, Joe Biden said, 'I would shut it down', referring to our Country. He has no clue!" Trump said.

Biden and his campaign have continued to hammer President Donald Trump's response to the coronavirus pandemic.

"The President keeps telling us the virus is going to disappear. He keeps waiting for a miracle," Biden said in his acceptance speech during Thursday's Democratic National Convention. "Well, I have news for him: no miracle is coming."

Biden has also called for governors to implement mask mandates for the next three months.

His proposals also include hiring 100,000 people for a national contact tracing effort and pouring $25 billion into the manufacturing and distribution of a vaccine.

Trump responded to Biden's proposals by accusing him of rejecting a "scientific approach in favor of locking all Americans in their basements for months on end."

"At every turn, Biden has been wrong about the virus, ignoring the scientific evidence and putting left-wing politics before facts and evidence," Trump told reporters at the White House last week.