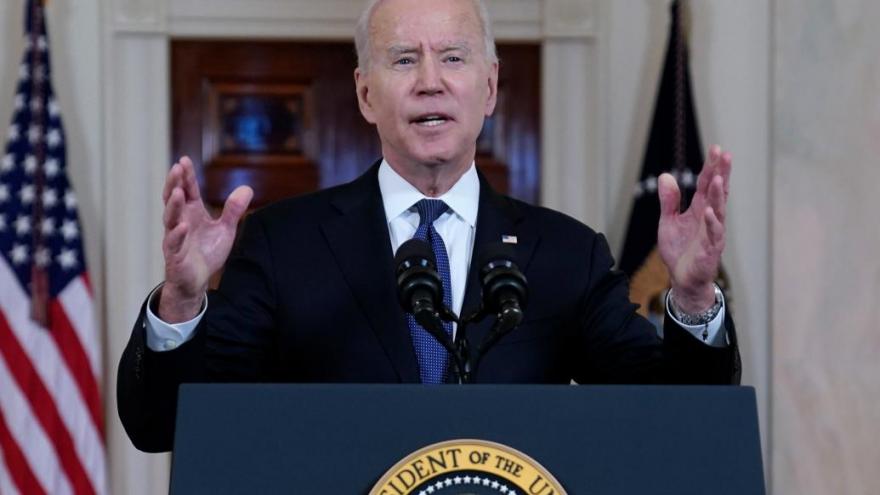 President Joe Biden on Friday told CNN he would not let his Department of Justice seize phone records or emails from reporters. Biden is shown in the Cross Hall of the White House, Thursday, May 20, 2021, in Washington.

(CNN) -- President Joe Biden on Friday told CNN he would not let his Department of Justice seize phone records or emails from reporters.

Following a joint presser with Korean President Moon Jae-In in the White House East Room, Biden told CNN: "We should absolutely, positively -- it's wrong, it's simply, simply wrong," adding, "I will not let that happen."

The Justice Department informed Starr, in a May 13 letter, that prosecutors had obtained her phone and email records covering two months -- between June 1, 2017 to July 31, 2017. The letter listed phone numbers for Starr's Pentagon extension, the CNN Pentagon booth phone number and her home and cell phones, as well as Starr's work and personal email accounts.

It is unclear when the investigation was opened, whether it happened under Attorney General Jeff Sessions or Attorney General William Barr, and what the Trump administration was looking for in Starr's records. The Justice Department confirmed the records were sought through the courts last year but provided no further explanation or context.

A Justice Department official confirmed that Starr was never the target of any investigation.

In some cases, members of the media are notified before a subpoena is issued, giving the news organization the ability to fight the subpoena in court. But Justice Department policy also allows prosecutors to obtain journalists' communications without their knowledge through the courts -- if the attorney general signs off and the Justice Department determines the case falls under "extraordinary measures," such as harm to national security, and after all other reasonable attempts have been made to obtain the information elsewhere.

Earlier Friday, White House press secretary Jen Psaki sidestepped answering on Friday whether the Biden administration believes seizing journalists' phone records is an "appropriate tactic," when asked to respond to reports from CNN and the Washington Post that the previous administration's Justice Department had done so as part of its leak investigations.

Psaki said she had learned of the issue after CNN's report Thursday.

"This President is committed, strongly, to the rights of the freedom of press as you've seen for decades, and standing up for the rights of journalists. And the Justice Department conveyed yesterday that they intend to meet with reporters to hear their concerns about recent notices, and they certainly intend to use the Holder model as their model, not the model of the last several years, but really these decisions would be up to the Justice Department," Psaki added, referring to former Obama administration Attorney General Eric Holder.

The Obama administration also came under criticism for its heavy-handed tactics toward leak investigations involving journalists. But the Trump administration aggressively pursued leak investigations as the former President frequently railed against the leaks coming out of the government. The latest disclosures appear to show the Justice Department targeting news organizations and social media companies particularly loathed by the former President.