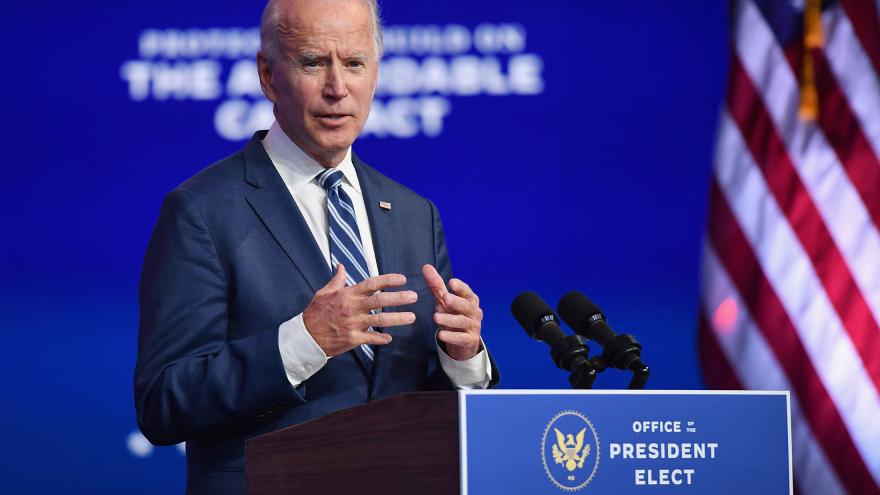 (CNN) -- President-elect Joe Biden will likely announce retired Army Gen. Lloyd Austin as his nominee for defense secretary on Tuesday, a source familiar with the matter told CNN, and is now expected to announce some domestic Cabinet picks on Friday.

Biden, asked by reporters in Wilmington, Delaware, earlier Monday when he would announce his selections for attorney general and defense secretary, had said, "I'll have an announcement for you on Wednesday and Friday," specifying that his defense pick would come Friday. A transition official later told CNN that the President-elect was not expected to announce his attorney general pick this week, but would likely make an economic announcement.

A separate source familiar with the decision told CNN on Monday that Biden has selected Austin, a former commander of US Central Command and former vice chief of staff of the Army, to be his secretary of defense.

Austin would make history as the first Black secretary of defense if confirmed by the Senate. He would need a congressional waiver to be confirmed for the civilian post because he retired from active-duty service only four years ago. Federal law otherwise requires seven years of retirement from active duty before taking on the role.

The first source pointed to Biden and Austin's long working relationship, along with Austin's experience, as the reason for his selection. They said the President-elect had developed a long-standing trust in and comfort level with Austin, including through spending time in the White House Situation Room.

Biden is also keenly aware of the historical significance of selecting the first Black man to lead the Pentagon, that source said.

CNN previously reported that there were three people in final contention to lead the Pentagon: Austin, Michèle Flournoy, a veteran Pentagon official who served as under secretary of defense for policy in President Barack Obama's administration, and Jeh Johnson, a former secretary of Homeland Security.

Johnson has also been mentioned as a possibility for attorney general, along with several other contenders, CNN has reported. Doug Jones, a United States senator from Alabama, Deval Patrick, a former governor of Massachusetts, Sally Yates, a former acting attorney general, and Lisa Monaco, a former Homeland Security adviser in the Obama White House and who previously worked at the FBI and as top national security prosecutor at the Justice Department, are also potential nominees.

Biden has moved quickly to build out his administration since being elected last month. Earlier Monday, Biden's transition team announced key members of the President-elect's health team who will lead his administration's response to the coronavirus pandemic when he takes office in January.

His health team includes California Attorney General Xavier Becerra as his nominee for secretary of Health and Human Services, Dr. Vivek Murthy as his nominee for US surgeon general and Dr. Anthony Fauci as chief medical adviser to the President. Monday's announcement came as coronavirus cases have spiked across the country and the death toll stood at more than 282,000 Americans.

Last week, Biden introduced several members of his economic team, including his nominee for secretary of the Treasury Department, Janet Yellen, the former chair of the Federal Reserve, who would help him rebuild an economy battered by the pandemic.

Biden has also named several key members of his national security and foreign policy teams. He named Antony Blinken, his top foreign policy aide, as the next secretary of state, Alejandro Mayorkas, a former deputy secretary of at the Department of Homeland Security, as the next DHS secretary, and Avril Haines to lead the US intelligence community, among others.

This story has been updated with additional reporting on the likely timing of Biden's announcements and a transition official saying the President-elect is not expected to announce his attorney general pick this week.