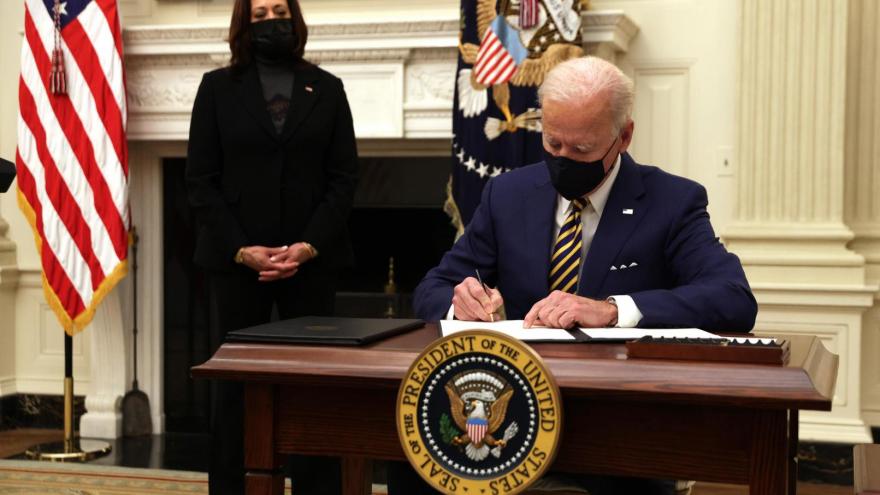 During an interview with ABC News' George Stephanopoulos, President Joe Biden on Tuesday said he supports bringing back the Senate's talking filibuster rule.

(CNN) -- President Joe Biden on Tuesday said he supports changing the Senate's filibuster rule by bringing back the talking filibuster, requiring a senator who wants to block legislation to hold the floor without taking a break.

"I don't think that you have to eliminate the filibuster, you have to do it what it used to be when I first got to the Senate back in the old days," Biden told ABC News' George Stephanopoulos. "You had to stand up and command the floor; you had to keep talking."

"So you're for that reform? You're for bringing back the talking filibuster?" Stephanopoulos asked.

"I am. That's what it was supposed to be," Biden responded.

He added, "It's getting to the point where, you know, democracy is having a hard time functioning."

It's the first time the President has expressed support for any changes to the Senate's legislative filibuster rule, which requires 60 senators to vote to end debate on a bill. The measure is intended to ensure bipartisan support for legislation but often serves as a barrier to popular bills that cannot gain enough votes from the minority party. The rule can be changed with a simple majority vote and the filibuster has already been spiked on judicial appointments.

While the talking filibuster rule would still require 60 votes to end debate on a bill, it would halt all business on the Senate floor until the filibuster was ended. The current Senate rules allow for other bills to be considered and voted on while a more controversial bill is filibustered.

In his interview with Stephanopoulos, Biden also told migrants not to come to the US as a crisis unfolds at the country's southwestern border -- with thousands of unaccompanied children now in federal custody -- and said New York Gov. Andrew Cuomo should resign if the investigations into allegations of sexual harassment prove them to be true.

The President's comments on the filibuster come after the White House repeatedly insisted that his preference was not to end the filibuster.

"His preference is not to end the filibuster. He wants to work with Republicans, to work with independents," White House communications director Kate Bedingfield told CNN's Jake Tapper on "State of the Union" earlier this month. "He believes that, you know, we are stronger when we build a broad coalition of support."

Some Democrats are pushing to end the 60-vote threshold on the legislative filibuster in order to move legislation through the narrowly divided chamber. The change could have a huge impact on Biden's legislative agenda in a 50-50 Senate, with Vice President Kamala Harris able to cast the tie-breaking vote in favor of Democrats.

If Democrats were to change the Senate rule, it would require a unified caucus.

Democratic Sen. Joe Manchin of West Virginia for the first time earlier this month opened the door to weakening the filibuster, but he still favors keeping the the 60-vote requirement, people familiar with his thinking previously told CNN.

Senate Minority Leader Mitch McConnell of Kentucky gave a stark warning on Tuesday about how Republicans would grind the chamber to a halt if Democrats changed the filibuster rules. He said it would lead to a "completely scorched-earth Senate."