Biden tells migrants not to come to US: 'Don't leave your town' 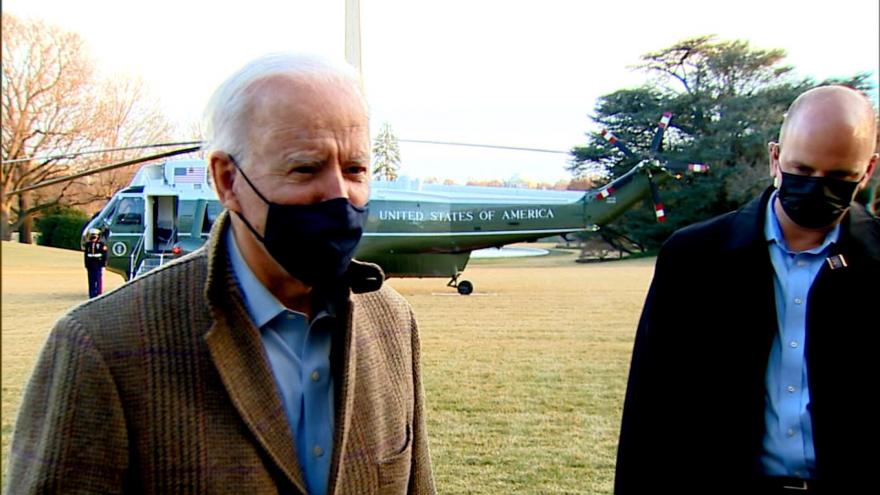 President Joe Biden Tuesday told reporters on the south lawn of the White House that he currently has no plans to visit the southern border.

(CNN) -- President Joe Biden discouraged would-be migrants from coming to the United States as his administration scrambles to respond to a surge of unaccompanied migrant children coming into the US.

"I can say quite clearly: Don't come," Biden told ABC in an interview aired on Tuesday.

The President continued: "We're in the process of getting set up, don't leave your town or city or community."

There's been a major spike in the number of migrant children in US custody. More than 4,000 migrant children are in Border Patrol custody, stretching federal resources for shelter space thin. Homeland Security Secretary Alejandro Mayorkas said in a statement on Tuesday that "we are on pace to encounter more individuals on the southwest border than we have in the last 20 years."

Many of those migrants have headed toward the US believe that Biden's administration will be more welcoming than his predecessor's more hardline posture. The President tried to downplay that perception during the interview, telling ABC's George Stephanopoulos "they're not" coming because they think his administration will allow them to stay in the country.

Biden told reporters earlier on Tuesday that he currently has no plans to visit the southern border.

"Not at the moment," Biden told reporters on the south lawn of the White House when he was asked whether he had any plans to visit the border.

Presidential visits have the power to draw international attention to emergencies and emerging issues. But even as the federal government says it is preparing to encounter more individuals on the southwest border than the country has seen in the last two decades, Biden and White House officials say a visit is not planned and repeatedly refused to call what's happening on the border a crisis.

During a gaggle aboard Air Force One on Tuesday following Biden's comments, White House press secretary Jen Psaki was asked by CNN's Kevin Liptak why the President has delayed raising refugee caps, following the news that hundreds of refugees approved to come into the US have been taken off flights and told to wait for Biden's sign off. Psaki said Biden has delayed raising the current cap on refugees because "we want to do it in an effective manner."

And when asked whether Biden was worried that letting more refugees in now would signal to people in Central America that the US is open to more immigration, Psaki reiterated the sentiment that the administration wants its actions to be effective.

"I wouldn't make a direct connection. I would say it's just something where we want to make sure that our system is prepared for to manage the process effectively and smoothly," she said.

Psaki had said during Monday's briefing at the White House that there were no plans for a presidential border trip, even as Biden and Vice President Kamala Harris have begun a national tour to promote the $1.9 trillion Covid-19 relief law.

On Tuesday, she also referred to the situation on the US-Mexico border as a "big problem," but still declined to call it a "crisis."

"I would say that his focus is on developing solutions, pushing his team, encouraging his team, to develop solutions that will expedite processing at the border, that will open more facilities that will ensure kids are treated with humanity and also treated safely," Psaki had said.

She added: "And that's his focus, and so that's where he's putting his efforts on immigration."

Biden's lack of travel plans to the border comes as his administration faces increasing pressure over his strategy on the US-Mexico border and his administration's attempts to address the growing number of migrants crossing into the US there.

Over the weekend, Mayorkas directed the Federal Emergency Management Agency to help with receiving, sheltering and transferring children.

And on Tuesday, he told ABC's George Stephanopoulos that the Biden administration is building capacity to address the needs of children arriving at the US-Mexico border alone.

"What we are doing is addressing young children who come to the border to make claims under the humanitarian laws that our country has established years and years ago. And we are building the capacity to address the needs of those children when they arrive, but we are also, and critically, sending an important message that now is not the time to come to the border," Mayorkas said on ABC.

While the spike in migrants is likely the result of several factors, including the Biden administration's perceived relaxing of border enforcement, Republicans are specifically blaming Biden's policies.

"This crisis is created by the presidential policies of this new administration. There's no other way to claim it than a Biden border crisis," McCarthy said during a trip to a Border Patrol processing center in El Paso, Texas, with 12 other Republicans.

Biden is also facing pressure from within his own party over his immigration strategy.

Senate Judiciary Chairman Dick Durbin of Illinois, the chamber's second-ranking Democrat, said Monday that he doesn't believe there's enough support in this Congress to pass a full-blown immigration bill with a pathway to citizenship for the 11 million undocumented immigrants -- a key pillar of Biden's immigration plan.

Democratic House members representing the border region have been critical of Biden's approach to the issue.

"We're not going to cage children or divide families or rip children from mothers' arms," Democratic Rep. Vicente Gonzalez of Texas told CNN's Abby Phillip on Sunday, "but we need an orderly process for migrants who qualify for asylum to hopefully ask for asylum in their home country or a neighboring country or maybe build a center in southern Mexico where they can be processed there."

And members of the Biden administration have repeatedly said migrants should not make the dangerous trek north, but Democratic Rep. Henry Cuellar of Texas told CNN on Monday that what the administration relays "has to be a strong message" and the "message is not coming through."

This story and its headline have been updated with additional comments from Biden.