Biden says he has 'great confidence' in Gen. Mark Milley after new reports 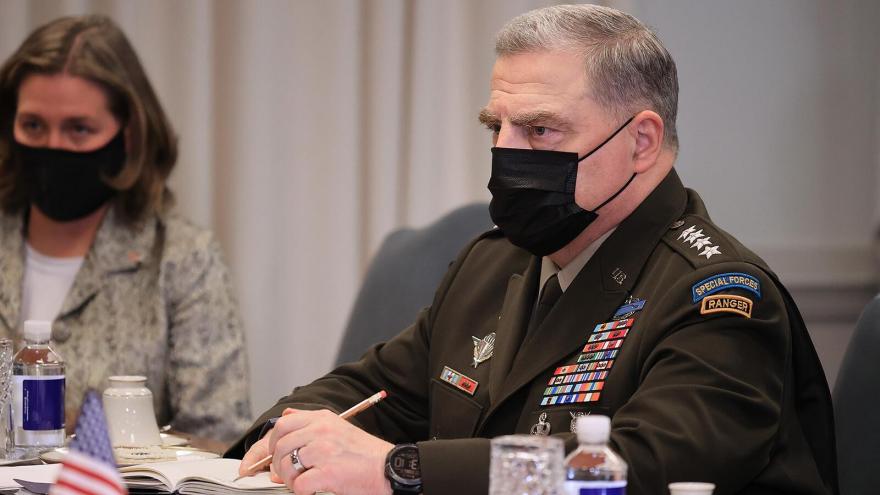 (CNN) -- President Joe Biden said Wednesday he has "great confidence" in Chairman of the Joint Chiefs of Staff Gen. Mark Milley's leadership after being asked about assertions leveled in a new book about Milley's actions in the aftermath of the January 6 attack on the US Capitol.

New reporting surfaced in Bob Woodward and Robert Costa's new book "Peril" details how Milley, the top US general, called his Chinese counterpart on two occasions to reassure him and took action to limit former President Donald Trump from potentially ordering a dangerous military strike. "Peril" discusses Milley's actions in regards to a military action or a nuclear strike, in which Milley told subordinates that he must be directly involved in any discussion.

When asked about the report by reporters Wednesday afternoon, Biden said, "I have great confidence in General Milley."

The book's reporting has sparked criticism from Florida Republican Sen. Marco Rubio, who called on Biden to dismiss Milley, and former National Security Council official Alexander Vindman, who called on Milley to resign if the allegations in the book were true.

"I'm not going to add more -- speak to anonymous unconfirmed reports about conversations with limited context from here. But what I can assure you all of is that the President knows General Milley, he has been chairman of the Joint Chiefs for almost eight months of his presidency. They've worked side by side through a range of international events. And the President has complete confidence in his leadership, his patriotism and his fidelity to our Constitution," Psaki told reporters Wednesday, later describing Milley as a "man of honor."

Psaki went on to outline the context of the time surrounding the reported actions.

"I think it's important to consider some of the context, key context of this period of time in history that we're discussing and is outlined or covered in portions of this book, The outgoing president of the United States during this period of time fomented unrest, leading to an insurrection and an attack on our nation's capital, on January 6th," she said.

Psaki added, "Beyond reports in this book, there's been widespread reporting and commentary from members of his own Cabinet -- the former president's Cabinet, I should say -- including high-ranking national security officials questioning the former president's stability, his behavior and his suitability to oversee the national security of the United States. So those are important questions that need to be discussed as well."

Milley will testify before the Senate Armed Services Committee later this month, where questions over his actions during this time are likely to come up. In a statement, Milley's spokesman defended his calls with his Chinese counterpart, saying the calls were part of a series of discussions with US allies and adversaries following the Capitol insurrection on January 6 "in order to maintain strategic stability."

Milley "regularly communicates" with his counterparts around the world, including with China and Russia, his spokesman, Col. Dave Butler, said in a statement.

A series of similar calls were also made in October, the statement said.

"General Milley continues to act and advise within his authority in the lawful tradition of civilian control of the military and his oath to the Constitution," Butler said.

Butler also defended a series of meetings with uniformed leaders early this year in which he says Milley reviewed the policies and protocols regarding the use of nuclear weapons.

"The meeting regarding nuclear weapons protocols was to remind uniformed leaders in the Pentagon of the long-established and robust procedures in light of media reporting on the subject," Butler said.

Asked Wednesday whether Milley should testify before Congress specifically on these reports, Psaki said the administration "will continue to work with Congress and cooperate with them, as appropriate, in meeting their needs."

Pressed repeatedly on whether Biden felt Milley was acting in the national interest and whether Biden had any concerns as to whether Milley worked outside the chain of command, Psaki declined to say.

"It's the obligation of every chairman of the Joint Chiefs to follow constitutional orders to prevent unlawful military action. That's what the President believes," she said, going on to reiterate the context of the aftermath of the Capitol attack where "there was broad concern from a range of members of his (Trump's) national security team about his behavior and fitness for office."