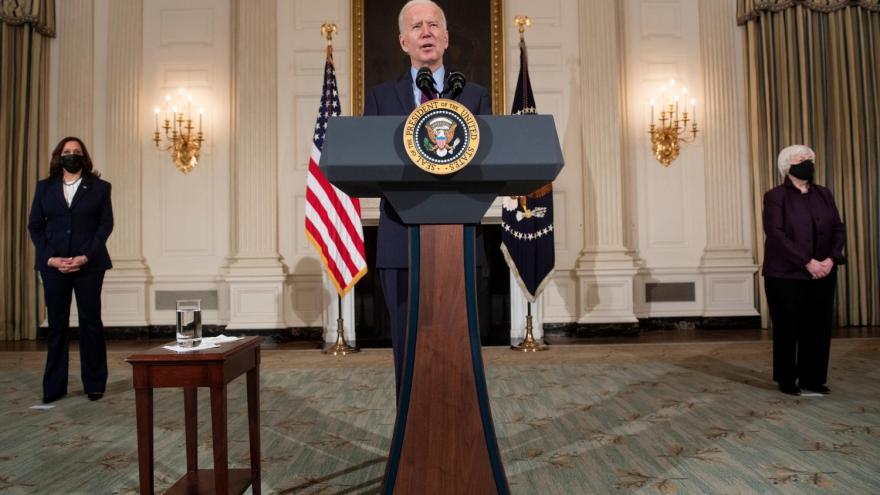 President Joe Biden says he doesn't think the $15 minimum wage will survive in his Covid-19 relief proposal. Biden is seen in this image speaking at the White House on February 5 in Washington, D.C.

(CNN) -- President Joe Biden conceded that he does not believe he will be able to raise the minimum wage to $15 an hour through his $1.9 trillion Covid-19 relief proposal due to the Senate's rules.

"I put it in, but I don't think it's going to survive," Biden told "CBS Evening News with Norah O'Donnell" in excerpts of an interview that aired Friday. The interview with CBS is his first for network television since taking office and the full interview will air on Sunday.

The President, who campaigned on raising the minimum wage to $15 an hour, said he was prepared "on a separate negotiation on minimum wage, to work my way up."

Both chambers of Congress on Friday passed a budget resolution that sets the stage for Democrats to be able to use a process known as "budget reconciliation" to pass Biden's sweeping Covid-19 relief bill on a party-line vote.

Biden has said he is willing to go forward without the support of Republicans, but has said he's willing to make certain concessions if it will earn bipartisan support.

A bipartisan deal is his preference, the President has said, but he has stressed the need to pass immediate and substantial relief to address the pandemic and economic crisis gripping the nation.

Biden said in the interview aired Friday that he was prepared to negotiate on which Americans get the $1,400 stimulus checks in his proposal, but reiterated he was not willing to compromise on the size of the checks.

In addition to the $1,400 stimulus checks, the President's $1.9 trillion Covid-19 relief proposal to Congress includes more aid for the unemployed, the hungry and those facing eviction. It includes increased funding for vaccinations and testing, and additional support for small businesses, states and local governments.

In his first week in office, Biden signed an executive order that begins laying the groundwork to institute a $15 minimum wage for federal workers and contractors.

Democratic lawmakers have pushed for years to raise the minimum wage, which now stands at $7.25 and hasn't been increased since 2009.

Now that Democrats have narrow majorities in the House of Representatives and the Senate, as well as Biden in the White House, they are renewing their push. Separate from the measure in Biden's Covid-19 relief proposal, a coalition of lawmakers introduced a bill last week that would raise the national minimum wage to $15 an hour.

The movement to raise the minimum wage has been met with steep opposition from Republicans and businesses leaders, who argue that boosting wages will force them to lay off workers.

This story has been updated with additional information from the interview.