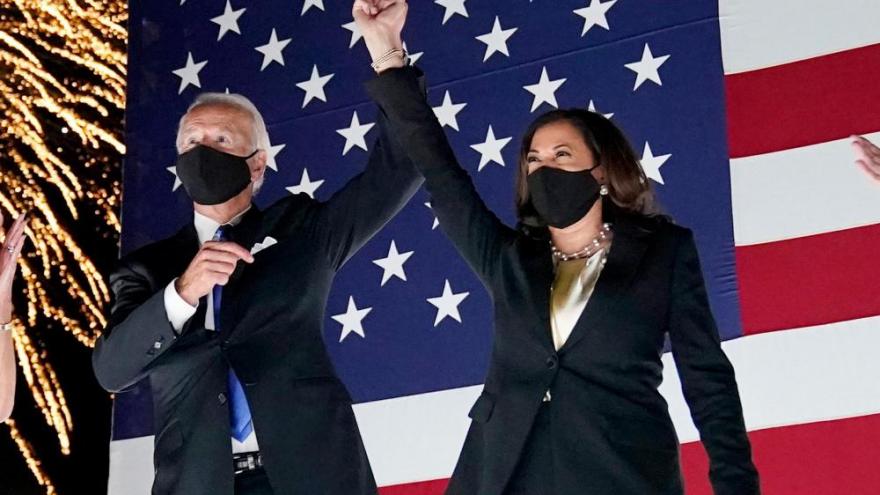 Democratic presidential nominee Joe Biden says he did not feel pressure to select a Black woman as his running mate, describing to ABC the motive behind choosing California Sen. Kamala Harris.

(CNN) -- Democratic presidential nominee Joe Biden says he did not feel pressure to select a Black woman as his running mate, describing to ABC the motive behind choosing California Sen. Kamala Harris.

"No, I didn't feel pressure to select a Black woman," Biden told ABC's Robin Roberts in a newly-released clip from a joint interview with Harris set to air in full Sunday night. "But I - what I do think and I've said it before, and you've heard me say it. I've probably said it on your show with you, is that the government should look like the people, look like the country."

"Fifty-one percent of the people in this country are women," he continued. "As that old expression goes, women hold up half the sky, and in order to be able to succeed, you've got to be dealt in across the board, and no matter what you say, you cannot, I cannot understand and fully appreciate what it means to walk in her shoes, to be an African American woman, with a Indian American background, child of immigrants."

Prior to his announcement, influential outside groups -- including Black women and Black men -- mounted a robust effort to persuade Biden that selecting a Black woman as his running mate would give him the best advantage to win the White House in November.

Harris made history Wednesday night as the first Black and South Asian woman to accept a major party's vice presidential nomination, promising to be a champion for the voiceless and forgotten Americans who are struggling in the midst of a pandemic and an economic crisis.

Biden, who would be 78 years old when sworn into office if elected, also pushed back on doubts circulating around his mental acuity, saying that he is "absolutely" leaving open the possibility of serving eight years as president.

In a clip from the ABC interview, Biden was asked by ABC's David Muir how he'd respond to attacks from the Trump campaign on his mental fitness.

"Watch me. Mr. President, watch me. Look at us both, what we say, what we do, what we control, what we know, what kind of shape we're in. Come on. This is look, I think it's a legitimate question to ask anybody over 70 years old whether or not they're fit and whether they're ready. But I just, only thing I can say to the American people, it's a legitimate question to ask anybody. Watch me," Biden said.

Pressed on what it meant when he called himself a "transition candidate," Biden said it doesn't mean he would be a one-term president if he were elected.

Biden and his campaign have continued to hammer President Donald Trump's response to the coronavirus pandemic. In another clip of the ABC interview released last week, Biden said, if elected, he would be willing to shut down the country again should there be a second wave of coronavirus in the US and scientists recommend the move to slow its spread.

"I would shut it down. I would listen to the scientists," the former vice president said.