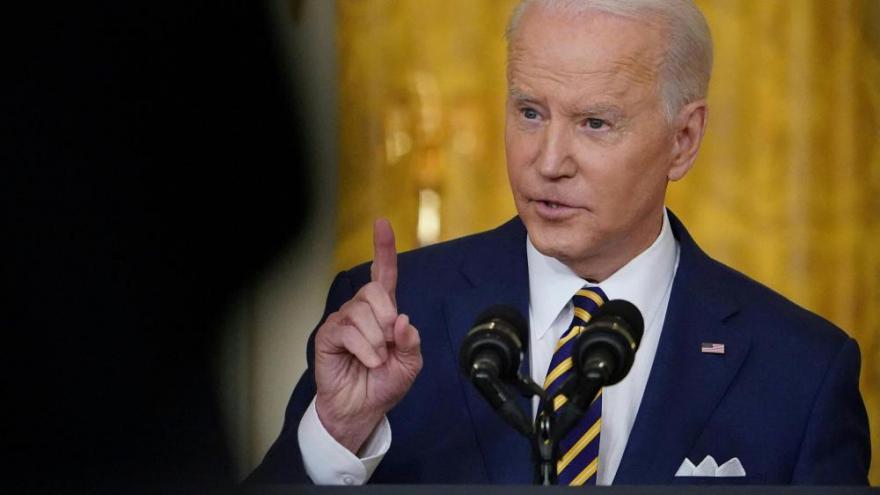 President Joe Biden on Wednesday said firmly that Vice President Kamala Harris will be his running mate should he run for reelection in 2024.

(CNN) -- President Joe Biden on Wednesday said firmly that Vice President Kamala Harris will be his running mate should he run for reelection in 2024.

Asked by a reporter whether he was satisfied with Harris' work leading the voting rights effort for the White House and whether he will commit to putting her on the ticket once again, Biden was direct.

"Yes and yes," he said simply.

When asked to explain, Biden added, "There's no need to."

"She's going to be my running mate, number one. And number two, I did put her in charge. I think she's doing a good job."

Biden's remarks Wednesday come after Harris dismissed a question about whether she'd be on the ticket in 2024 in an interview with NBC last week, following an op-ed that floated Biden picking Republican Rep. Liz Cheney of Wyoming to replace Harris.

"I'm sorry, we are thinking about today. I mean honestly I know why you're asking the question. ... We're focused on the things in front of us," she said.

Still, questions persist about whether Biden actually plans to run again in 2024. And missteps by Harris -- whose allies believe she is both underutilized as a political asset and overexposed to difficult issues -- have led to deeper introspection about the future of the Democratic Party.

Harris has said on multiple occasions that she and Biden haven't talked about whether the 79-year-old will run for reelection in 2024.

In an interview with ABC News in December, Biden once again says he intends to run for reelection in 2024, though he left a little wiggle room in his answer.

"Yes. But look, I'm a great respecter of fate -- fate has intervened in my life many, many times. If I'm in the health I'm in now -- I'm in good health -- then in fact I would run again," Biden said.

Pressed by ABC's David Muir if he'd be up for a rematch against former President Donald Trump, Biden joked, "You're trying to tempt me now."

"Sure. Why would I not run against Donald Trump? He's the nominee, that increases the prospect of running," Biden added.

The President has been adamant that he will run for reelection in 2024, despite the fact that he will be 81 years old on Election Day. Biden is already the oldest person in US history to be inaugurated as president, but has been deemed to be in good health and "fit to successfully execute the duties of the president, to include those as Chief Executive, Head of State and Commander in Chief," according to his White House doctor, Dr. Kevin O'Connor.