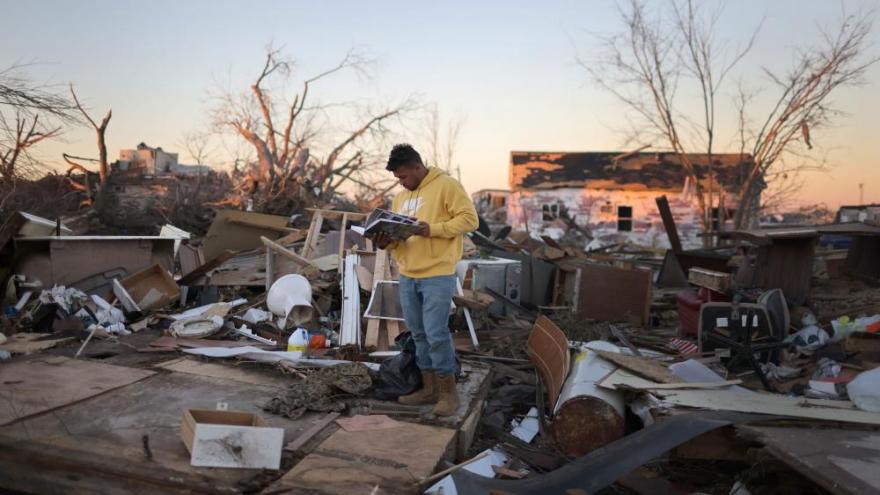 President Joe Biden will travel to Kentucky in the wake of deadly tornadoes and severe storms that devastated the area, where he'll survey storm damage, meet with victims and deliver remarks, and pictured storm damage struck by a tornado on December 13, in Mayfield, Kentucky.

(CNN) -- President Joe Biden traveled to Kentucky on Wednesday in the wake of deadly tornadoes and severe storms that devastated the area, announcing that the federal government would cover 100% of costs of emergency work for the first 30 days after the extreme weather event.

"You know, the scope and scale of this destruction is almost beyond belief. ... These tornadoes devoured everything in their path," Biden said during remarks in Dawson Springs, Kentucky, amid the wreckage of a neighborhood devastated by a tornado.

He later added that he's been "involved in responding to a lot of disasters" and that survivors are looking for a moment to breathe.

"And you can see it in people's faces," he continued, "what they're really looking for -- and look around, I say to the press ... is just to be able to put their head down on a pillow, be able to close their eyes, take a deep breath, go to sleep and make sure the kids are OK. That's what people are looking for right now. A lot of hard work has to happen in the next two or three months to bring it all the way back."

The President said during his remarks in Dawson Springs that he previously "wasn't sure" he had the authority to make the change to the disaster declaration, but added, "it turns out I do."

"The government's going to cover 100% of the cost -- 100% of the cost for the first 30 days for all the emergency work," he continued. That coverage, Biden said, include debris removal, the cost of overtime for law enforcement and emergency personnel, as well as shelter.

At an earlier storm briefing in Mayfield, Kentucky, with local leaders, the President expressed shock at some of the images he saw during his aerial tour of the area, pledging the full force of the federal government to help rebuilding and recovery efforts.

Biden said he was "amazed" at the way the community has come together in the wake of the storm.

The President also underscored to the local leaders that the federal government was there to help in the immediate aftermath, but would also be there further into rebuilding efforts.

"I just want you to know -- I'm driving the governor crazy calling him all the time -- but there may be things available that would be helpful six weeks, six months from now that you're unaware of. And so we're -- I've instructed my team to make you all aware of everything that is available from a federal level," Biden said, later telling the group, "Don't hesitate to ask for anything."

Biden said at the briefing that he was "here to listen."

"I think the vast majority of Americans know what you've been through just (by) looking on television. It has been incredible. Your colleagues talk about it -- they've seen it, they say, 'Holy gosh, what's going on?'" the President said.

The White House said the Kentucky congressional delegation, which has only one Democrat, was invited to travel with the President. But Kentucky Republican Rep. James Comer, who represents areas that have been devastated by the recent extreme weather, was the only member of Congress listed traveling with the President aboard Air Force One on Wednesday morning.

Asked if it was difficult for Biden to prepare to visit a conservative-leaning area, White House press secretary Jen Psaki said on Tuesday that the President looks at the victims "as human beings, not as people who have partisan affiliations."

"I wouldn't say it's hard to prepare, I would say the President just wants to send a clear message and stand by people in these communities as they're going through this difficult time," she said.

FEMA, she said, has sent "dozens of generators" to help with recovery efforts in Kentucky, "along with 135,000 ... liters of water, 74,000 meals and thousands of cots." Federal assistance also included blankets, kits for infants and toddlers, and "pandemic shelter kits."

Beshear said earlier Tuesday that 568 National Guard troops are helping with post-tornado efforts in Kentucky, including 79 performing search and extraction and fatality search and retrieval, 52 clearing routes in support of the Department of Forestry, 74 military police and air security forces on law enforcement augmentation and 111 working traffic control points.