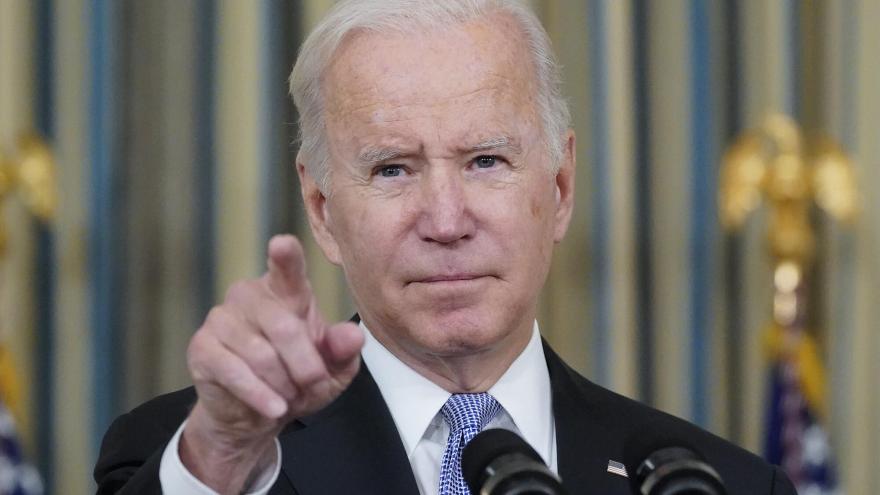 President Joe Biden calls on reporters for questions as he speaks about the bipartisan infrastructure bill in the State Dinning Room of the White House, Saturday, Nov. 6 in Washington.

(CNN) -- President Joe Biden on Saturday strongly endorsed the idea of the US government compensating immigrant families separated at the border under the Trump administration's "zero-tolerance policy," saying the previous administration's "outrageous behavior" warrants cash payments -- but he didn't go into detail about specific amounts.

"If in fact, because of the outrageous behavior of the last administration, you coming across the border, whether it was legal or illegal, and you lost your child, you lost your child! ... you deserve some kind of compensation no matter what the circumstance. What that will be, I have no idea. I have no idea," Biden said, raising his voice and gesturing emphatically as he tore into his predecessor's onetime policy.

In 2018, the Trump administration announced its "zero tolerance" policy, in which the Justice Department initiated criminal prosecutions of every adult illegally crossing the border, and was ended after widespread opposition. The policy resulted in the separation of thousands of families, including those with infants, some only a few months old, because children can't be kept in federal jail with their parents.

A source familiar with the matter told CNN last week that migrant families who were forcibly separated at the US-Mexico border under the policy could receive hundreds of thousands dollars in compensation as part of a settlement being negotiated between the Justice Department and the families' lawyers.

The comments from Biden come several days after he denied a recent report from The Wall Street Journal that the federal government was considering payments of $450,000 per individual affected by the policy. The American Civil Liberties Union (ACLU) filed a class-action lawsuit in 2019 seeking damages for the toll the separations took on families, and attorneys representing families have filed separate claims.

The Justice Department has told attorneys representing those families that the settlement figures reported in the media "are higher than anywhere that settlement can land," ACLU Executive Director Anthony D. Romero told CNN earlier this week.

More than 3,000 children were separated from their families at the US-Mexico border under former President Donald Trump. It's unclear how many people would be eligible for payments.