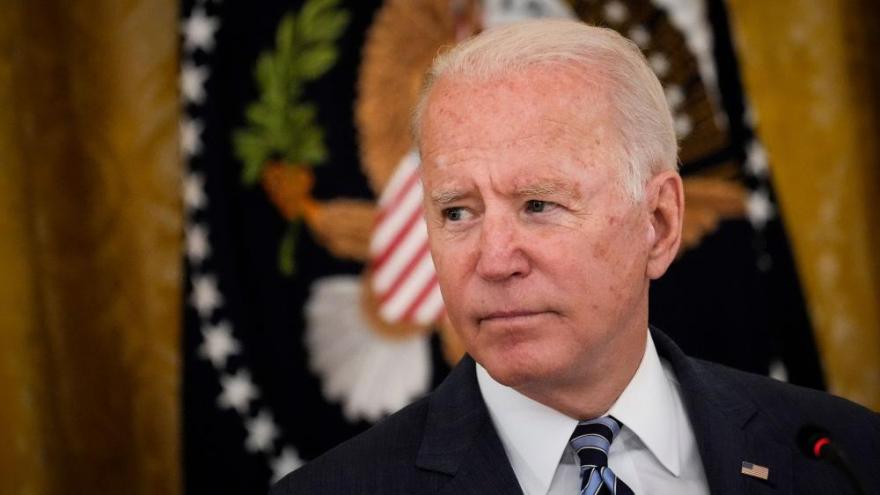 President Joe Biden on Friday urged Democrats to pass massive infrastructure and social safety net legislation at a time when sharp disagreements between moderate and progressive members of his party threaten his domestic agenda.

(CNN) -- President Joe Biden on Friday said negotiations on Capitol Hill over his economic agenda had reached a "stalemate" as sharp disagreements between moderate and progressive members of his party threaten to derail his plans.

The President said at the White House he was confident Democrats would ultimately reach an agreement and that he would sign the $1.2 trillion bipartisan infrastructure package as well as the $3.5 trillion package to expand the nation's social safety net into law.

"Now we're at this stalemate at the moment and we're going to have to get these two pieces of legislation passed. Both need to be passed," Biden told reporters Friday.

But the path forward for both pieces of legislation remains unclear. But moderates and progressives are currently entrenched in their positions at this critical moment in negotiations, which is leaving Biden's agenda hanging in the balance.

"This is a process and it's going to be up and down," Biden said.

Biden spent nearly four and a half hours meeting with several key Democratic lawmakers on Wednesday to try to hammer out details of the $3.5 trillion economic package. On Friday he sought to strike a hopeful tone about the progress made in those negotiations.

"Both meetings went very well. I mean, it was, it was -- they were collegial. No one's hollering. Everybody's, you know -- and people are hanging out afterwards in the Oval -- and anyway, both the progressives as well as the moderates," Biden said.

Biden suggested some moderate Democrats listed priorities that added up to more than what they have said they were willing to spend.

"We're getting down to the, you know, the hard spot here. People are having now to go in and look in detail as to what it is specifically they're for," Biden said.

Biden acknowledged that natural disasters over the past month had hampered his plans to sell his economic plan to the public.

House Democratic leadership has committed to a September 27 vote on the $1.2 trillion bipartisan infrastructure package, and progressives have threatened to sink that vote if the $3.5 trillion package isn't ready to move as well. But that larger package is nowhere near ready to move at the moment.

Biden on Friday also spoke about the next phase of his administration's plan to combat the Covid-19 pandemic after the US Centers for Disease Control and Prevention issued recommendations about booster shots for millions of vulnerable Americans.

"We have the tools to beat Covid -- Covid-19 -- if we come together as a country and use the tools we have," Biden said.

He added: "I've made clear all along the decision of which booster shot to give, when to start the shot and who will get them is left to the scientists and the doctors. That's what happened here."

Biden said he would be receiving his booster shot, as the White House had previously confirmed.

CDC Director Dr. Rochelle Walensky signed off on several recommendations made by the agency's independent vaccine advisers, but also partially diverged from the committee's recommendations on boosters.

Specifically, Walensky broke with the Advisory Committee on Immunization Practices when she recommended booster shots for Americans ages 18 to 64 who are at increased risk of Covid-19 because of their workplaces or institutional settings, such as health care workers, caregivers for frail or immunocompromised people, people in homeless shelters and people in correctional facilities. The committee members voted 9-6 against recommending boosters for that group of Americans.

Walensky endorsed other recommendations from the vaccine advisers, including recommending boosters for people age 65 and older and residents of long-term care facilities who received the Pfizer/BioNTech Covid-19 vaccine series at least 6 months ago, and people ages 50 to 64 with underlying medical conditions.

The CDC also endorsed the vaccine advisers' recommendation that people ages 18 to 49 with underlying medical conditions may receive a booster based on their individual benefits and risks.

The announcement from the CDC came after the US Food and Drug Administration on Wednesday gave emergency use authorization for a booster dose of Pfizer's Covid-19 vaccine in people 65 and older.

This story has been updated with additional comments from Biden and background information.