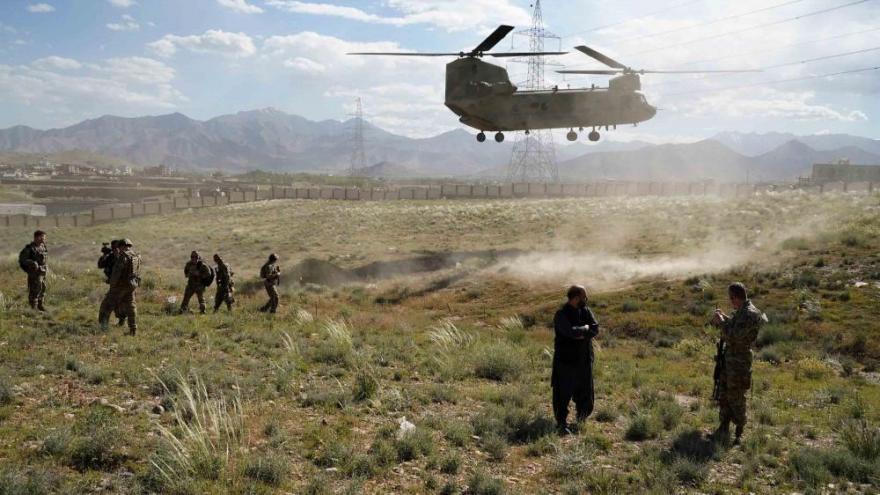 The United States is supposed to complete a total withdrawal of troops and personnel from Afghanistan before the end of May, and the Biden administration is running out of time to decide on a way forward in a reeling country.

(CNN) -- With 50 days until the United States is supposed to complete a total withdrawal of troops and personnel from Afghanistan -- a move that a Pentagon report stated could be devastating to "the survival of the Afghan state as we know it" -- the Biden administration is running out of time to decide on a way forward in a country reeling amid an upsurge in violence, endemic corruption, and a floundering economy.

Though the nominal deadline for a US withdrawal is May 1st, several defense officials told CNN that the US-led NATO alliance would like to see decisions taken no later than April 1 because of the challenges of removing US weaponry and equipment, amid concerns about some of it falling into the hands of the Taliban.

Since 9/11, the United States has poured $864 billion and 2,400 lives into Afghanistan in pursuit of a noble idea: turning one of the poorest, most dangerous countries in the world into a self-sufficient democratic state led by a strong, stable Afghan government that cannot be used as a staging ground to plan and launch terrorist attacks against other states.

But those goals have seldom been more out of reach, Special Inspector General for Afghanistan Reconstruction (SIGAR) John Sopko said following the release of his latest report on the greatest risks to the US efforts in the country.

"A corrupt, narcotic fueled Afghan state will never be a reliable partner able to protect itself or the interests of the United States and other donors," Sopko said bluntly Wednesday, presenting his report to the Center for Strategic and International Studies. The single goal of the Afghan government right now is "survival," Sopko said.

The conditions necessary for a successful conclusion to US involvement in Afghanistan and an end to America's 20-year war are crumbling, the authors of the SIGAR report wrote. Afghanistan has only grown more violent since the signing of an agreement with the Taliban in February 2020, as Taliban attacks on government forces have intensified amidst a wave of assassinations of prominent officials, activists, journalists, and more.

The country's endemic corruption actively subverts US reconstruction efforts and may cause them to outright fail. The illegal opium trade in Afghanistan has flourished, as the US and other countries have curtailed counternarcotics efforts and the Afghan government does little to impede the trade. And then the coronavirus pandemic wiped out the modest 3% growth in the Afghan economy in 2019.

"The path forward for reconstruction -- whatever the outcome of current peace negotiations between the Taliban insurgents and the Afghan government -- has never been more fraught with risk," the report found. The government, heavily reliant on international donors, will struggle to sustain itself or its armed forces in the event of a complete US troop withdrawal or a further decrease in foreign aid. The Afghan government relies not only on the security and training offered by US forces, but by the manpower and expertise provided by thousands of US and other contractors.

Biden needs to decide in weeks

The focus is on May 1, the date upon which the US is supposed to withdraw all forces from Afghanistan under a peace agreement signed between the Trump administration and the Taliban. But any decision, from a complete withdrawal to an increase in troop levels, will require planning and coordination weeks ahead of that date.

If the Biden administration completes the drawdown and removes the remaining 2,500 troops from Afghanistan, it will require a massive effort to either remove or destroy weapons, equipment, and facilities that could fall into the hands of the Taliban, the defense officials told CNN. While some gear and sites could be turned over to the Afghan government, the uncertain future is hanging over all decisions for now.

This means there is a desire that decisions are taken no later than April 1, the defense officials said. Once a potential full withdrawal is less than 30 days away, it could become more likely that arms and equipment will have to be destroyed, possibly through the use of explosives.

The challenge is one of geography. While as much equipment as possible would be put aboard aircraft and flown out in a final 30-day window, it is not feasible because of Afghanistan's mountainous, rugged terrain to withdraw over roads, and there are no nearby ports. In contrast, during the 2011 withdrawal from Iraq, convoys could move relatively easily on a southerly route out of the country to Kuwait.

But for now, there is no clarity on next steps.

"We're working closely with Afghan parties to encourage progress on a political settlement and a comprehensive ceasefire," State Department spokesman Ned Price said Tuesday. "We're also working diplomatically to mobilize regional and international support for peace. There is a broad and longstanding consensus that there is no military solution to this conflict, and that the political solution ... must be Afghan-led and Afghan-owned."

Pentagon spokesman John Kirby has said that no final decision has been made and the interagency review of options and policies continues.

US has proposed a power-sharing agreement

The Biden administration has proposed to the Afghan government that they enter an interim power-sharing agreement with the Taliban in a letter from Secretary of State Antony Blinken to President Ashraf Ghani.

Blinken also proposed that Afghanistan's neighbors, including Iran, take on a greater role and warned that the Biden administration continues to review whether to withdraw US troops.

The letter, sent via US Special Representative for Afghanistan Reconciliation Zalmay Khalilzad, offers the first real look at the Biden administration's thinking about Afghanistan, and appeared to reflect frustration as Blinken wrote that he wanted Ghani "to understand the urgency of my tone."

The situation in Afghanistan is a thorny one for Biden, who opposed an increase in the US presence there during the Obama administration and has said he wants to wind down US involvement in the nearly 20-year conflict. Biden could face domestic criticism if he does not follow through on the withdrawal, but at the same time, Afghanistan remains unstable, the Taliban have increased their control of wider swaths of the country and the gains made by women and girls are at risk.

The US has "plans on the shelf" on how to accomplish a full withdrawal by May 1 if the order comes, a defense official told CNN. Those plans include giving some material to the Afghans, shipping some home and destroying some, the official said. Even with the troop level down from 13,000 personnel roughly one year ago to 2,500 troops now, the rough calculation is it would require a significant number of aircraft and a lengthy airlift effort.

However, there could be a mix of decisions including extending the mission beyond May 1, or some type of negotiated agreement to permit a lengthier withdrawal.

The reduced troop levels -- the lowest since 2001 -- offer a key benefit. Because of multiple drawdowns in recent months, years of excess inventory has already been reduced, the official said. Less clear is how long it would take NATO allies to withdraw their 8,000 troops and material on a quick turnaround.

But peace is not a panacea for Afghanistan, Sopko warned. A comprehensive peace agreement may require an additional $5.2 billion in new foreign aid through 2024, the report said.

"Rather than a peace dividend, the international donor community may instead get stuck with the bill," Sopko said.