Biden responds to Lucy Flores' allegation, says 'not once' does he believe he acted inappropriately 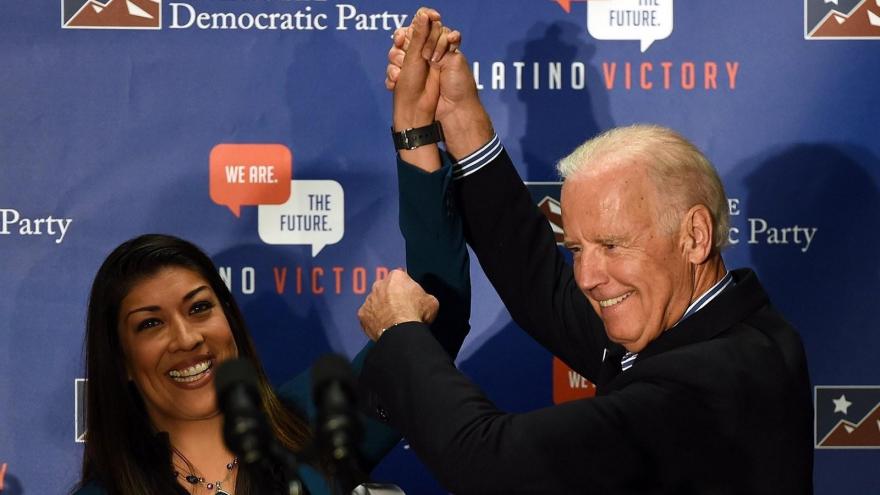 In his first statement following the allegations from former Nevada state assemblywoman Lucy Flores, former Vice President Joe Biden says "...not once -- never -- did I believe I acted inappropriately. If it is suggested I did so, I will listen respectfully. But it was never my intention." Previously there have only been statements from Biden's spokesman.

(CNN) -- Former Vice President Joe Biden responded for the first time on Sunday to allegations that he made a Nevada politician feel "uneasy" in 2014 when he kissed her on the back of her head, saying that he never believed he acted inappropriately.

"In my many years on the campaign trail and in public life, I have offered countless handshakes, hugs, expressions of affection, support and comfort," Biden said in a statement. "And not once - never - did I believe I acted inappropriately. If it is suggested I did so, I will listen respectfully. But it was never my intention."

The statement was the first response to the allegations directly from the former vice president. Previously there have only been statements from Biden's spokesman.

Lucy Flores, the former Democratic nominee for lieutenant governor of Nevada, made the allegations against Biden on Friday in an essay for The Cut, an arm of New York magazine, writing that Biden made her feel "uneasy, gross, and confused" in 2014 when, at a campaign rally in Nevada, she said he kissed her on the back of the head.

The initial statement from Russo said, "Neither then, nor in the years since, did (Biden) or the staff with him at the time have an inkling that Ms. Flores had been at any time uncomfortable, nor do they recall what she describes."

"But Vice President Biden believes that Ms. Flores has every right to share her own recollection and reflections, and that it is a change for better in our society that she has the opportunity to do so," the statement read.

Flores said in response to the new statement from Biden himself that she was "glad that he's willing to listen" and "glad that he is clarifying his intentions."

In his statement on Sunday, Biden said, "I may not recall these moments the same way, and I may be surprised at what I hear. But we have arrived at an important time when women feel they can and should relate their experiences, and men should pay attention. And I will."

"I will also remain the strongest advocate I can be for the rights of women. I will fight to build on the work I've done in my career to end violence against women and ensure women are treated with the equality they deserve. I will continue to surround myself with trusted women advisers who challenge me to see different perspectives than my own. And I will continue to speak out on these vitally-important issues where there is much more progress to be made and crucial fights that must be waged and won."

The accusation against Biden comes as he is considering a bid for president in 2020. He is expected to announce his decision as soon as April.

A longtime Biden ally told CNN's Jeff Zeleny on Sunday there were no signs the former vice president was reassessing his 2020 plans in the wake of the allegations but cautioned Biden had still not made a final decision.

Flores recounted the incident in her appearance on CNN, saying it occurred as she was preparing herself to deliver remarks when Biden approached her from behind.

"Very unexpectedly and out of nowhere, I feel Joe Biden put his hands on my shoulders, get up very close to me from behind, lean in, smell my hair and then plant a slow kiss on the top of my head," Flores said.

She said the moment was "shocking."

Flores said in the interview that political considerations were the "impetus" for her decision and that the conduct she accused Biden of was "something that we should consider when we are talking about the background of a person who is considering running for president."

Flores also said that while she did not claim that the behavior she described rose "to the level of a sexual assault or anything of that nature," it was "inappropriate."

"What I am saying is that it's completely inappropriate, that it does not belong in any kind of a professional setting, much less in politics," Flores said. "The reason why we're having these conversations about Vice President Joe Biden is because he's considering running for president."

Over the years, photos and video of Biden touching women at public events have garnered media attention, but much of Biden's behavior in this regard has been downplayed or attributed to Biden's personal approach. One such instance occurred at the swearing-in of Defense Secretary Ashton Carter in 2015, when Biden put his hands on Carter's wife's shoulders, leaned over and whispered something in her ear. Video of the incident was scrutinized on social media; Carter's wife, Stephanie, later said she was not offended by the incident, according to Politico.

"Last night, I received a text from a friend letting me know that picture was once again all over Twitter in connection to Lucy Flores' personal account of a 2014 encounter with Joe Biden," she wrote. "Let me state upfront that I don't know her, but I absolutely support her right to speak her truth and she should be, like all women, believed. But her story is not mine. The Joe Biden in my picture is a close friend helping someone get through a big day, for which I will always be grateful."

After Flores came forward, many of Biden's potential competitors for the Democratic Party's presidential nomination addressed the allegations.

Massachusetts Democratic Sen. Elizabeth Warren said Saturday she believes Flores, "and Joe Biden needs to give an answer." Former Secretary of Housing and Urban Development Julián Castro said at the same Iowa event as Warren that he believed Flores.

"We need to live in a nation where people can hear her truth," Castro said.

Vermont independent Sen. Bernie Sanders appeared on CBS' "Face the Nation" Sunday morning, and said he too "had no reason not to believe" Flores' account.

"I think what this speaks to is the need to fundamentally change the culture of this country and to create environments where women feel comfortable and feel safe and that's something we have got to do," Sanders said.

Asked if he thought, like Flores, that the allegation was disqualifying for Biden, Sanders said it was a decision for Biden to make.

"I'm not sure that one incident alone disqualifies anybody, but her point is absolutely right," Sanders said of Flores. "This is an issue not just that Democrats or Republicans, the entire country has got to take seriously."

Massachusetts Democratic Rep. Seth Moulton, who said he is considering a presidential run, said on CNN's "State of the Union" after Flores' interview that Biden "does need to answer this."

Minnesota Democratic Sen. Amy Klobuchar said on ABC's "This Week" that she had "no reason not to believe her" and that Biden would have to continue to address the allegation if he joins the race.

Some who have worked with Biden tweeted their support of the former vice president, with one calling him a "champion for women."

Sheila Nix, a 2012 campaign chief of staff for Biden, who later served as chief of staff to Dr. Jill Biden, tweeted: "I was the Chief of Staff for @JoeBiden on the 2012 reelection and traveled around the country with him. He empowered women on his staff and was alway (sic) supportive of us. Not only did fight for women through the policies he advocated, he treated women on his team with full respect."

Kendra Barkoff Lamy, a former press secretary for the former vice president, tweeted, "As a former staffer for @JoeBiden and also someone who works on women's issues, I can say unequivocally that I was never uncomfortable with how he treated me or other women. He dedicated his career to women's empowerment, safety & equality. That's one reason why I worked for him."

Elizabeth Alexander, a former press secretary for the former vice president, who also served as the communications director when he was in the Senate, posted on Twitter, "Traveled the country and world with @joebiden for 5 yrs as a senior member of his staff,in both the Senate and WH. Been with him in good times, bad times,quiet moments and on the biggest stages. Through it all, he was,and has always been, a huge champion for women and equality."