'Never give up hope': Biden reprises role as consoler-in-chief during South Florida visit 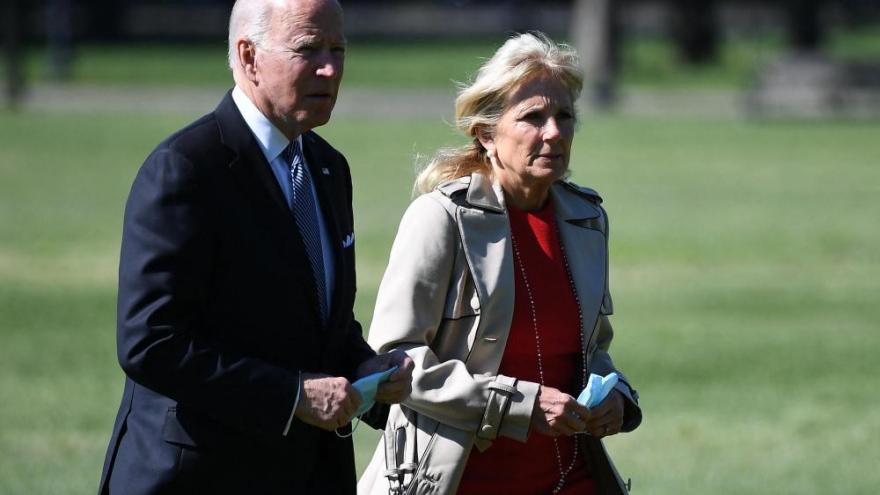 President Joe Biden greets first responders to the collapse of the 12-story Champlain Towers South condo building in Surfside, during a meeting with them in Miami Beach, Florida on July 1.

(CNN) -- President Joe Biden, whose empathy amid loss is his chief political characteristic, traveled Thursday to console families in Florida enduring the excruciating search for loved ones inside a seaside condo that suddenly collapsed a week ago.

"Never give up hope," he told the anguished relatives of those still missing, who had gathered in a hotel ballroom to hear from a President whose own reckoning with grief has colored his personal and political lives. Later, Biden told reporters the families were "going through hell" as they question whether they'll ever be able to recover their loved ones' remains.

The meeting with families was closed to the press, but some attendees posted about the event on social media. Biden, who spoke softly, had his words translated into Spanish.

"It used to drive me crazy when they'd say I know how you feel," he said, recounting the deaths of his wife, daughter and son -- losses that have punctuated his public life. "And you know they meant well but you know they had no idea. None."

He was speaking from experience. From the day in 1972 when he was sworn in as US senator at his sons' hospital bedside following a car crash that had killed his wife and daughter, Biden's persona been defined by grief. When one of those sons, Beau, died of a brain tumor in 2015, grief again came to color Biden's life. He wrestled with it publicly, including as he weighed a presidential run.

"Be patient with one another," he went on. "Hang on. Hold on. I don't want you to feel like you're being sucked into a black hole in your chest. There's no way out. But there is."

The devastating structural failure, which so far has resulted in 18 confirmed deaths with another 145 people still unaccounted for, could become the deadliest non-intentional building collapse in American history. It has raised new questions about the safety of high-rises that run for miles along the South Florida coast, along with similar developments across the nation.

Biden, who was joined by first lady Jill Biden in Florida, declined to speculate on the cause of the disaster and said there was no "definitive judgment as to why it collapsed." He is awaiting findings from a team of six federal scientists and engineers collecting information on the ground. He hopes to use results from their investigation to determine how infrastructure like residential towers can be better fortified against catastrophic failure, according to officials.

But before then, there are grieving families to comfort and exhausted rescue personnel to thank -- a presidential responsibility Biden takes as seriously as any.

"The waiting," Biden told the families, "the waiting is unbearable."

Before he departed Florida, Biden and the first lady stopped at a stretch of chain-link fence, where families have placed flowers, homemade signs and candles near the site of the collapse. The President made a sign of the cross and wiped his eyes after his wife knelt and set down a large bouquet of white flowers wrapped in clear cellophane.

The bulk of Biden's day occurred behind closed doors with families. He said he thought it important to speak with each group individually after delivering his opening remarks, including a woman whose husband and baby boy were lost in the collapse.

"The families are very realistic," Biden said. "They look and see cement upon cement upon cement. They talk about watching the whole floor come down on top of another floor. They know that the chances are as each day goes by diminished."

"At a minimum," he said, "they want to recover the bodies."

The President spent roughly three hours meeting with the dozens of families affected by the tragedy. He had been briefed earlier in the day by officials, including Gov. Ron DeSantis, a chief acolyte of former President Donald Trump who is considered a potential presidential candidate in 2024.

"I think there's more we can do, including, I think I have the power -- we'll know shortly -- to pick up 100% of the costs for the county and state," Biden said from an interior conference room at the St. Regis Hotel, where maps and diagrams -- including one showing the storm path of an incoming weather pattern -- hung on the wall.

Biden hailed their ability to work together responding to a catastrophic building collapse.

"You know what's good about this?" Biden said. "We live in a nation where we can cooperate. And it's really important."

The two men have mostly sought to put aside politics in the wake of the disaster -- though Biden raised eyebrows last week when he told reporters he was "waiting on a call from him if he needs the help."

They eventually connected in a phone call that one official described as professional and focused on providing Florida the help it needed. Biden signed an emergency declaration that freed up federal resources and Federal Emergency Management Agency search-and-rescue teams. And DeSantis has appeared alongside Democrats throughout this week during news conferences near the site of the collapse.

"You recognized the severity of this tragedy from day one and you've been very supportive," DeSantis said during Thursday's briefing.

"This is life and death," Biden said. "And so — I don't think — I just got back from 12 days in Europe. They wonder whether we can do this. And you're doing it. Simple act of everybody doing whatever needs to be done. And it really makes a difference."

While politics inevitably seep into disaster relief, Biden has emphasized the need for bipartisanship to get things done. While aides began planning for a visit to Florida shortly after the gravity of the disaster became clear, the President issued specific and firm instructions that no visit take place if it meant diverting a single firefighter or law enforcement officer from the search-and-rescue efforts, according to a person familiar with the matter.

Throughout the weekend and early this week, officials were in talks with authorities on the ground to ensure the efforts at the condo site were not affected by the requirements of a presidential visit, which typically include a large contingent of state and local police.

The President has long drawn upon wells of his own private grief to help comfort individuals facing loss. Aides have maintained a file folder of dozens of eulogies he has delivered over the years, along with quotes on loss and grief that can be incorporated into speeches or talking points.

In Florida, he assumed a role that presidents have long taken on, with differing levels of aptitude, after natural disasters or man-made catastrophes throw communities into grief.

The collapse of Champlain Towers South doesn't fall neatly into either of those categories, neither natural nor criminal, though residents of the building have already begun to lay blame on poor maintenance and neglect. And while hope for finding survivors dims by the day, it is still too early for Biden to officially mourn all of those who have been lost.

But in traveling to Surfside, Biden hoped to convey solidarity and resolve even as much about the disaster remains unknown.

It won't be the first time as president that he assumes the role of consoler-in-chief. He has sought to correct what he said was a glossing over by his predecessor of the hundreds of thousands who have died from Covid-19, including during a somber White House ceremony when the death toll reached 500,000.

"I know all too well that black hole in your chest. You feel like you're being sucked into it. The survivor's remorse. The anger. The questions of faith in your soul," Biden said before observing a moment of silence in front of a candlelit South Portico.