Biden recounts his visit to Uvalde: 'The pain is palpable' 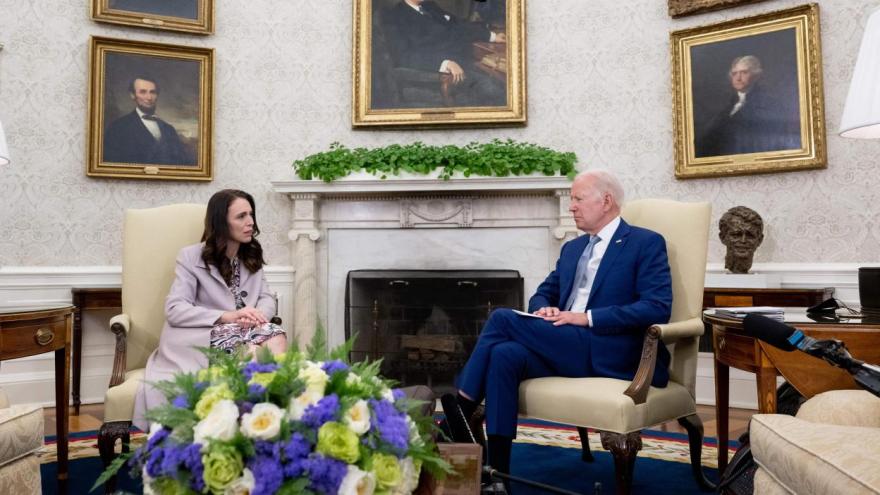 US President Joe Biden (R) meets with Prime Minister Jacinda Ardern, of New Zealand, in the Oval Office of the White House on May 31. Biden said on Tuesday that the pain was "palpable" when he met with grieving families in Uvalde, Texas.

(CNN) -- President Joe Biden on Tuesday said the pain was "palpable" when he met with grieving families in Uvalde, Texas, this weekend following a mass shooting at an elementary school that claimed the lives of 19 children and two teachers.

The President said he spent nearly four hours in a room with about 250 family members on Sunday.

"The pain is palpable," he said as he described his meetings with the community ahead of a meeting with New Zealand Prime Minister Jacinda Ardern in the Oval Office.

The President said he and Ardern would be talking about violence and online extremism during their meeting. New Zealand voted on a bipartisan basis to change its gun laws after a live-streamed mass shooting in Christchurch in 2019, and Ardern has been at the forefront of efforts to crack down on online extremism.

"I want to work with you on that effort and I want to talk to you about what those conversations were like, if you're willing," he told her.

"Our experience of course, in this regard, is our own. But if there is anything that we can share of any value, we are here to share it," she said later.

Biden said he would be meeting with members of Congress on the possibility of gun reform as members are starting to meet to find a possible legislative answer to the tragedy in Uvalde. The President has acknowledged there is little he can do without the support of congressional Republicans to stop the mass shootings, which happen with alarming frequency in the US.

"Much of it is preventable and the devastation is amazing," Biden said on Tuesday.

A small, bipartisan group of senators is meeting virtually Tuesday to explore potential areas of common ground on gun reform. Lawmakers are under intense pressure to take action in the aftermath of the horrific shooting, but there has been a stalemate over gun policy in Washington for years and Democratic efforts to reform gun laws have been repeatedly blocked by Republicans and some moderate members of their own party.

Some of the measures Democrats have called for include expanded background check bills and red flag laws, which can allow law enforcement or family members to petition for a court order to temporarily take guns away from an individual deemed to be at significant risk of hurting themselves or others by having a firearm. Biden has also called for Congress to ban assault weapons and high-capacity magazines.

The President and first lady on Sunday paid their respects at a makeshift memorial outside of Robb Elementary School. They also met with local officials, paramedics, mental health services providers, firefighters, and law enforcement officials. The Bidens also attended Mass at Sacred Heart Catholic Church, where Archbishop Gustavo García-Siller invited children from the devastated community to sit at the front.

The Justice Department has announced it is conducting a review of the botched law enforcement response to the shooting, which Texas officials have described as punctuated with wrong decisions.