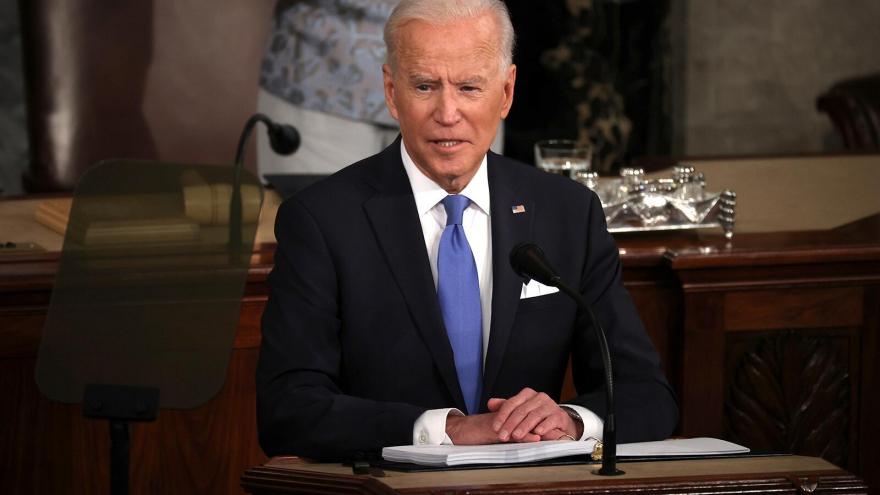 The Biden administration will raise the refugee ceiling to 62,500 people this fiscal year. Biden is shown in the House chamber of the U.S. Capitol April 28, 2021 in Washington, DC.

"I am revising the United States' annual refugee admissions cap to 62,500 for this fiscal year," Biden said in a lengthy statement Monday. "This erases the historically low number set by the previous administration of 15,000, which did not reflect America's values as a nation that welcomes and supports refugees."

Biden said he plans to set a goal of 125,000 refugee admissions for fiscal year 2022 as well, in line with a commitment he made in his first foreign policy address at the State Department.

Monday's announcement gets the administration back to its initial proposal that was introduced in February. The administration abruptly reversed course last month, when it announced that Biden would sign an emergency determination that kept this year's refugee cap at 15,000, but not raise it as he had committed to doing. The move faced immediate blowback from refugee groups and Democratic lawmakers frustrated by the sudden shift.

Monday, Biden said taking action on the cap will "remove any lingering doubt in the minds of refugees around the world who have suffered so much, and who are anxiously waiting for their new lives to begin."

"The sad truth is that we will not achieve 62,500 admissions this year," the President continued. "We are working quickly to undo the damage of the last four years. It will take some time, but that work is already underway."

Biden also said his goal of 125,000 refugee admissions within the first fiscal year of his presidency "will still be hard to hit."

"We might not make it the first year. But we are going to use every tool available to help these fully-vetted refugees fleeing horrific conditions in their home countries," he continued. Refugee caps are often viewed as a goal to be reached.

As of March 31, only 2,050 refugees had been admitted to the United States this fiscal year under Trump's 15,000 cap, according to the Refugee Processing Center, which is part of the State Department.

Last month, the White House backtracked after Biden described the influx of migrant children on the country's southern border as a "crisis," in what appeared to be a notable shift in language.

"We're gonna increase the numbers. The problem was that the refugee part was working on the crisis that ended up on the border with young people and we couldn't do two things at once. And now we're going to increase the numbers," Biden said at the time.

CNN previously reported Biden resisted signing off on raising the Trump-era refugee cap because of political optics. The President's hesitation came as the administration faced heat from Republicans and Democrats for its handling of an influx of migrants at the US-Mexico border. But the situation at the US southern border is separate from the refugee program, which dates back decades and has a thorough vetting process in place for refugees overseas to resettle in the US.

"Why was there such so much back and forth about this refugee cap? Was the hesitancy just about politics?" Tapper said.

"The President has been committed to the refugee program and to rebuilding it and regaining our status as a world leader in the refugee affairs since day one, and that has been unwavering. We're very proud of the announcement today, and it reflects that enduring commitment," Mayorkas replied.

"President Biden has reaffirmed what so many Americans have long known -- refugees are welcome here and are a blessing to our communities. The new admissions ceiling reflects our core values as a welcoming nation, and finally aligns public policy with the unprecedented global need of millions forced from their home by violence, war, and persecution," said Krish O'Mara Vignarajah, president and CEO of Lutheran Immigration and Refugee Service, in a statement.

David Miliband, president and CEO of the International Rescue Committee, echoed that, saying: "When America welcomes refugees it is the best of America, leaning on its distinguished tradition and long-held values of providing refuge to those fleeing violence and political persecution."