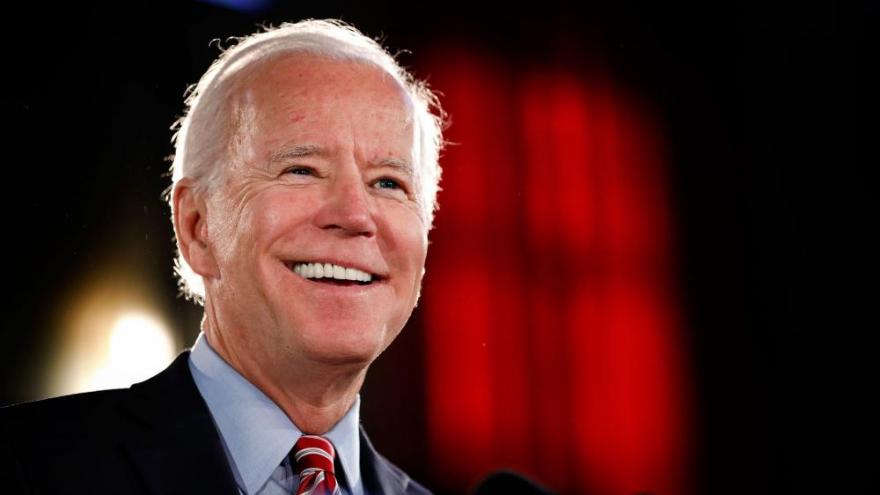 (CNN) -- Joe Biden just had the best day of his campaign.

The endorsements are a boon for Biden and come on the eve of the critical Super Tuesday contests, when voters in 14 states and one US territory will decide about one-third of all pledged delegates. And they represent a coalescing among more moderate Democrats around Biden and firmly against Vermont Sen. Bernie Sanders, the more progressive candidate who currently holds the lead in national delegates.

The endorsements are timely, too. Both Minnesota, Klobuchar's home state, and Texas, O'Rourke's home state, vote on Tuesday, a fact that was mentioned by both Democrats when they urged their supporters to get behind Biden.

Buttigieg made his endorsement first, touting Biden as a political figure "who will draw out what is best in each of us."

"And I'm encouraging everybody who was part of my campaign to join me because we have found that leader in Vice President, soon-to-president, Joe Biden," Buttigieg said.

Buttigieg ended his presidential bid on Sunday night, telling supporters he did not see a path forward for his candidacy and calling for Democrats to unite to defeat Trump. Buttigieg made the decision to endorse Biden on Sunday, aides said, after he came in fourth in South Carolina.

Defeating President Donald Trump "was always a goal that was much bigger than me becoming President," Buttigieg continued. "And it is in the name of that very same goal that I am delighted to endorse and support Joe Biden for president of the United States."

Biden, in response, lauded Buttigieg and, in a powerful moment, compared him to his late son, Beau.

"I don't think I've ever done this before, but he reminds me of my son, Beau," Biden said, with Buttigieg looking on. "I know that may not mean much to most people, but to me, it's the highest compliment I can give any man or woman."

Klobuchar's endorsement came later in the night at a rally near downtown Dallas with her husband and daughter, and Jill Biden, the former vice president's wife.

"We need to unite our party and our country and to do it not just with our words but with our actions," Klobuchar said. "I believe we can do this together. And that is why, today, I am ending my campaign and endorsing Joe Biden."

Klobuchar, highlighting the "grit" and "determination" that she staked her campaign on, cast the former vice president as someone who can "bring our country together and build that coalition of our fired-up Democratic base."

"We do not in our party want to just eek by a victory," Klobuchar said. "We want to win big. And Joe Biden can do that."

Klobuchar finished sixth in both South Carolina and Nevada, finishes that effectively ended her campaign. Conversations between Klobuchar and her campaign manager about exiting the race and endorsing Biden started Sunday morning, a senior adviser said.

Biden thanked Klobuchar for her endorsement and nodded to the senator's future as she ended her campaign.

"You're going to hear a lot from Amy Klobuchar for a long, long time," Biden said.

And then came O'Rourke's endorsement, which Biden slipped into the end of his event by calling on the former Senate and presidential candidate to take the stage.

"There's one more person I want to thank, a man who electrified this state and nation," Biden said of O'Rourke, who was joined on stage by his wife Amy.

"We need Joe Biden," O'Rourke said, adding that he would be voting for the former vice president on Tuesday.

"We need someone who can beat Donald Trump," O'Rourke said. "And in Joe Biden we have that man."

Biden got the victory he needed in South Carolina on Saturday night, winning with a nearly 29-point margin over Vermont Sen. Bernie Sanders. The blowout win positioned the former vice president as the surging moderate alternative to Sanders.

Biden won roughly three out of five black voters in South Carolina -- the state he has long called his firewall. The question now becomes whether Biden can carry that momentum into Super Tuesday and garner similar support in other states.

The South Carolina win set off a cascade of support and a rapid coalescing around Biden.

This was clear on Monday, when Biden finished his event in Dallas by having both Klobuchar and O'Rourke, along with his local endorsements, on the stage together.

"Let's get the whole team," Biden bellowed from stage after his standout day. "This is a team!"

This story has been updated with additional developments from Monday.