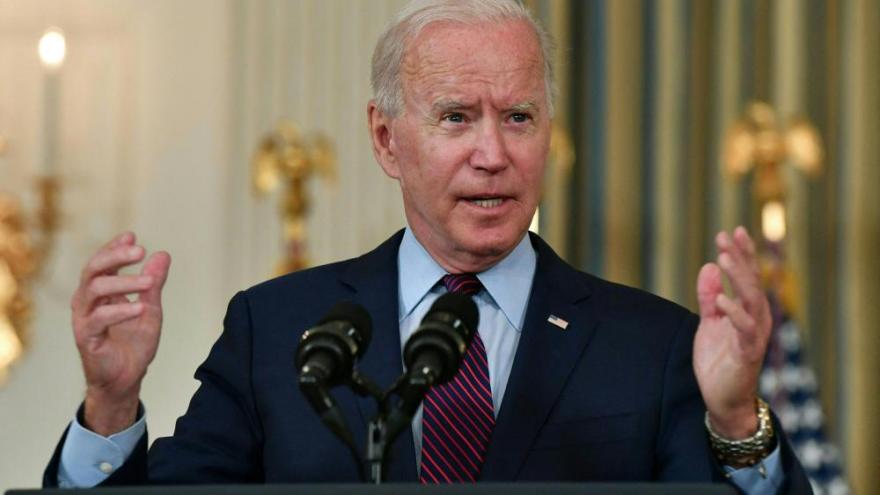 President Joe Biden, pictured here, at the White House on October 4, arrives in Illinois as part of his administration's push for Covid-19 vaccine requirements.

The comments came during a speech near Chicago, where Biden was highlighting his administration's push toward Covid-19 vaccine requirements.

Speaking in the direction of United Airlines CEO Scott Kirby, who joined Biden for the speech in Elk Grove Village, the President said, "Scott, I want you to know I instructed the Justice Department to make sure that we deal with the violence on aircraft coming from those people who are taking issues."

"We're going to deal with that," the President added.

Figures from the Federal Aviation Administration released Tuesday show more disruptions on commercial flights in the past week than any week in the past two-and-a-half months. The FAA says 128 new incidents were reported by flight crews -- the highest weekly figure since the FAA started releasing weekly data on July 20 -- bringing this year's total to 4,626 incidents.

The FAA has proposed more than $1 million in fines against unruly airline passengers this year.

During his speech, which came hours after the White House had released a report promoting the benefits of vaccine requirements, the President said he "tried everything" in his power to get individuals vaccinated for Covid-19.

"Even after all these efforts, we still had a quarter of the people in the United States who were eligible for vaccinations but didn't get the shot. And we know there is no other way to beat the pandemic than to get the vast majority of Americans vaccinated," Biden noted, later adding, "So while I didn't race to do it right away, that's why I've had to move toward requirements that everyone get vaccinated where I had the authority to do that. That wasn't my first instinct."

Biden underscored his frequent argument -- that the current pandemic is one of the unvaccinated and individuals who are unvaccinated are continuing to put the US economy at risk.

But in a rare note of optimism, he mentioned that Covid-19 cases are down this past month by 40%. Hospitalizations are down by 25%.

"We're headed in the right direction if we keep our eye on the ball here. We still have a long way to go," Biden said.

The White House's new report on vaccinations points to a rise in vaccination rates as evidence the administration's vaccine campaign has "saved over 100,000 lives and prevented 450,000 hospitalizations."

The 26-page document highlights support for vaccine requirements across business and labor communities, and points to what it says is data demonstrating vaccine requirements have already cut the number of unvaccinated Americans by one-third since late July, from 95 million to 67 million.

The report also details the positive economic effects among communities with high vaccination rates, including that "small business employee hours grew faster and stayed higher during the rise of the Delta variant in the states that have higher working-age vaccination rates, versus states with lower vaccination rates."

"As this report demonstrates, it is clear that vaccination requirements result in millions more people getting vaccinated. Without vaccination requirements, we face endless months of chaos in our hospitals, further detrimental impacts on our economy, and anxiety in our schools. With them, we will accelerate our path out of the pandemic," the report states.

Biden directed the Labor Department's Occupational Safety and Health Administration (OSHA) to require all businesses with 100 or more employees ensure their workers are either vaccinated or tested once a week. Companies could face thousands of dollars in fines per employee if they don't comply.

The President said during his remarks that the Labor Department's rule would be issued "shortly."

A CNN poll conducted by SSRS in August and September found that more than half of Americans now say they support requiring vaccinations for office workers returning to the workplace (54%), students attending in-person classes (55%) and patrons attending sporting events or concerts (55%), although fewer (41%) support requiring vaccinations for a shopper to enter a grocery store.