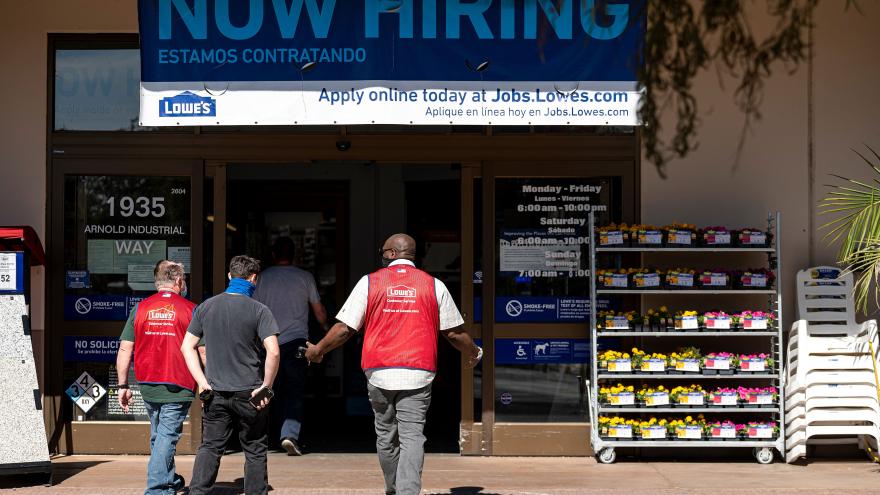 (CNN) -- President Joe Biden had to tread a fine line Monday between heralding the economic progress his administration has made so far and stressing the need to continue supporting laid-off workers and pass his large-scale infrastructure proposal in the wake of last week's disappointing jobs report.

Though the economy created a scant 266,000 jobs in April, Biden stressed that more than 1.5 million jobs have been added since he took office -- the most in the first 100 days of any of his predecessors.

"So let's be clear, our economic plan is working," he said, speaking from the White House. "I never said, and no serious analyst ever suggested, that climbing out of the deep, deep hole our economy was in would be simple, easy, immediate or perfectly steady."

At the same time, Biden acknowledged the concerns of some Republican officials and business owners, affirming that laid-off Americans must return to work if they are offered positions.

"The law is clear: if you are receiving unemployment benefits and you're offered a suitable job, you can't refuse that job and just keep getting the unemployment benefits," he said, while also repeating that he doesn't see much evidence of people staying home because of the more generous federal payments.

The firm statement diverged in tone from Biden's earlier directive that jobless Americans can keep collecting unemployment benefits even if they turn down work for pandemic safety concerns. The Department of Labor issued new guidance to that effect in late February, saying that workers should not have to choose between accepting a position in an unsafe place and risking the health of themselves or their loved ones.

By contrast, after months of increased Covid-19 vaccinations and ample supply of the three available vaccines, the Biden administration on Monday said it was directing the Department of Labor to clarify that workers cannot turn turn down a job due to a general concern about Covid-19 and continue to receive benefits. Also, Labor Secretary Marty Walsh will work with states to reinstate work search requirements for unemployment benefits' recipients, if health and safety conditions allow. Some 29 states have already done so after suspending them last year amid the coronavirus outbreak.

The fight over unemployment benefits

The enhanced pandemic unemployment benefits have become a lightning rod as the nation seeks to move beyond the coronavirus outbreak.

As part of their $1.9 trillion relief package, the Democrats extended into early September the trio of federal measures that Congress first enacted in March 2020 in its unprecedented expansion of the nation's unemployment benefits system. These include: providing a weekly federal boost now worth $300, on top of state benefits; enabling freelancers, independent contractors and certain people affected by the virus to receive unemployment compensation and extending payments for those who've exhausted their state benefits.

Republicans and business owners point to labor shortages in many states and industries as proof that the supplemental benefits are keeping people on the sidelines.

The governors of Montana, South Carolina and Arkansas last week announced they would end the pandemic programs in their states in late June. And the US Chamber of Commerce called for the termination of the $300 supplemental payment the jobless are currently receiving.

Alabama Gov. Kay Ivey, a Republican, said Monday that the state will cease participating in the pandemic programs starting June 19. The state's unemployment rate is 3.8%, among the lowest in the nation.

"As Alabama's economy continues its recovery, we are hearing from more and more business owners and employers that it is increasingly difficult to find workers to fill available jobs, even though job openings are available," Ivey said. "Among other factors, increased unemployment assistance, which was meant to be a short-term relief program during emergency related shutdowns, is not contributing to a labor shortage that is compromising the continuation of our economic recovery."

More federal assistance is on its way

Also key to getting people back to work is removing the barriers that are keeping them home, including sending aid to state and local governments, providing access to child care, reopening schools and broadening vaccination efforts, Biden said.

The President and White House outlined Monday some steps the administration is taking to assist in these areas. Biden noted that only 18% of working-age adults were fully vaccinated when the jobs report survey was taken in mid-April. Today, the figure is 34%.

Also, the Treasury Department launched the $350 billion Coronavirus State and Local Fiscal Recovery Funds program, which was created by the $1.9 trillion rescue package in March.

States, counties, metropolitan cities, tribes and territories can begin applying for their share, which could start being disbursed within days, a senior administration official told reporters Monday.

The money can be used to cover revenue shortfalls and increased expenses caused by the pandemic, including for spending on Covid-19 mitigation efforts, public health and mental health and substance abuse. The funds can also provide struggling households with food and housing assistance and help small businesses and other industries.

Noting that state and local governments have shed 1.3 million jobs since the start of the pandemic, officials said the funds will allow teachers, bus drivers, cafeteria staff, public safety and frontline personnel and essential workers, among others, to be rehired. Governments can also provide premium pay to essential workers.

In addition, the money can be spent on longer-term improvements to communities, including investments in clean drinking water, wastewater and stormwater systems and in broadband expansion.

One controversial restriction that Congress included in the provision is a ban on state and local governments using the funds directly or indirectly for tax cuts. More than a dozen Republican-led states have sued the administration over this measure, arguing that it is unconstitutional and exceeds lawmakers' authority.

States will have to demonstrate how they have spent their allotments on eligible uses, another senior administration official said. If they want to cut taxes, they can, but they must demonstrate that the reductions were not supported by the federal funding.

"A state would simply have to show, 'Here's where the money went. We used it. We were not gaming in any way to indirectly free up other money for the tax relief'," the official said. "If they meet that test, then of course they have their sovereign right as states to do whatever would like, including tax reductions."

Providers can use the funds to pay the rent, mortgage, insurance, utility bills, payroll and debts incurred because of the coronavirus pandemic. The money can also be used to buy personal protective equipment and implement safety measures, such as improving ventilation. States also can provide direct subsidies to families to help cover child care costs.

Also, the President announced that the administration is sending the first grants under the Restaurant Revitalization Fund to 16,000 restaurants hit hard by the pandemic. The program provides aid to struggling restaurants, bars, food trucks and other food and drink establishments and will help these businesses hire back workers. In the first two days of the program 186,200 restaurants, bars, and other eligible businesses applied for relief.

Meanwhile, the Treasury Department this week will lay out clear steps on how businesses can determine their eligibility and claim the expanded Employee Retention Credit that was included in the American Rescue Plan. This year, the credit offers eligible employers with 500 or fewer employees a tax credit of 70% of the first $10,000 in wages per employee per quarter. More than 30,000 small businesses have claimed more than $1 billion in credits this year, according to the White House, and the administration is working to increase participation in the program.

This story and its headline have been updated with additional developments on Monday.