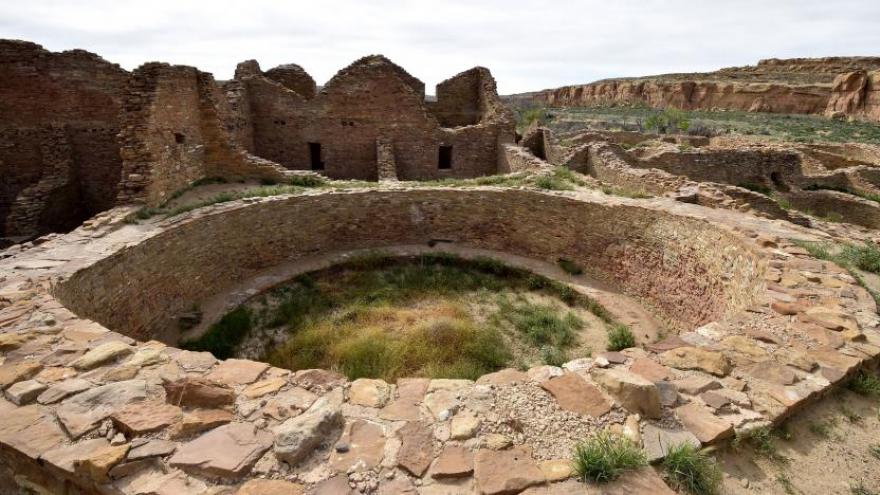 The ruins of Pueblo del Arroyo house at Chaco Culture National Historical Park in New Mexico are shown here. President Joe Biden is proposing a 20-year ban on new oil and gas drilling near the park.

(CNN) -- President Joe Biden announced Monday a proposal for a 20-year ban on new oil and gas drilling near Chaco Canyon in northwest New Mexico -- one of the oldest Native American sites in the US -- White House officials said.

In the coming weeks, the Department of Interior's Bureau of Land Management will start the agency process to effectively bar new oil and gas leasing on federal lands within a 10-mile radius around Chaco Culture National Historical Park. The park is one of just 24 UNESCO World Heritage Sites in the country.

"Chaco Canyon is a sacred place that holds deep meaning for the Indigenous peoples whose ancestors lived, worked, and thrived in that high desert community," Interior Secretary Deb Haaland said in a statement. "Now is the time to consider more enduring protections for the living landscape that is Chaco, so that we can pass on this rich cultural legacy to future generations."

Haaland, the first Native American Secretary of the Interior, is from New Mexico. Haaland is a member of the Laguna Pueblo tribe.

Biden announced the action as he hosts a tribal nations summit meeting at the White House on Monday. The Biden administration's proposed drilling ban underscores key parts of the president's climate agenda, including environmental justice.

"These efforts, to use the word my dad would use so much, is a matter of dignity," Biden said Monday. "That's the foundation of our nation to nation partnership."

The process to bar new oil and gas drilling on the land will take time; the Bureau of Land Management said it plans to soon announce a notice in the Federal Register to kick off a two-year segregation of the federal lands around Chaco Canyon. During this time, the bureau will conduct environmental analysis while it also seeks public comment on the oil and gas ban.

Separately, the State of New Mexico Land Office has also put a ban on new state mineral leases within 10 miles of the historical park. Officials said the new federal proposal won't apply to individual Indian allotments or to minerals within the area owned by private, state and tribal entities.

"Today's announcement has been years in the making," said BLM Director Tracy Stone-Manning. "We look forward to kicking off a broader regional conversation with the many people who care deeply about the Greater Chaco landscape on how we can best manage the cultural and natural values unique to this special place."

Native American tribes in New Mexico and Arizona have been raising concerns about oil and gas development in the area that pose a threat cultural sites and sacred lands near Chaco Canyon. But the move is expected to draw complaints from the oil and gas industry. New Mexico is an oil and gas-rich state, especially the Permian Basin in the southeastern part of the state.

Biden's action on Chaco Canyon comes after the president also restored protections for the Bears Ears and Grand Staircase-Escalante monuments in Utah -- national monuments with historic significance to Native American tribes. Still, other tribes in the Midwest have sharply criticized the Biden White House for not stopping the Line 3 pipeline, which would carry tar sands oil from Canada and pass through tribal land in Minnesota.

While Biden and Interior are moving to protect this site, there are still larger questions about the administration's strategy around oil and gas drilling. The Interior Department has been working on a major report assessing the federal government's oil and gas leasing program for months. Initially due out in the summer, there's still little sign of when the report will drop -- to the consternation of members of Congress.