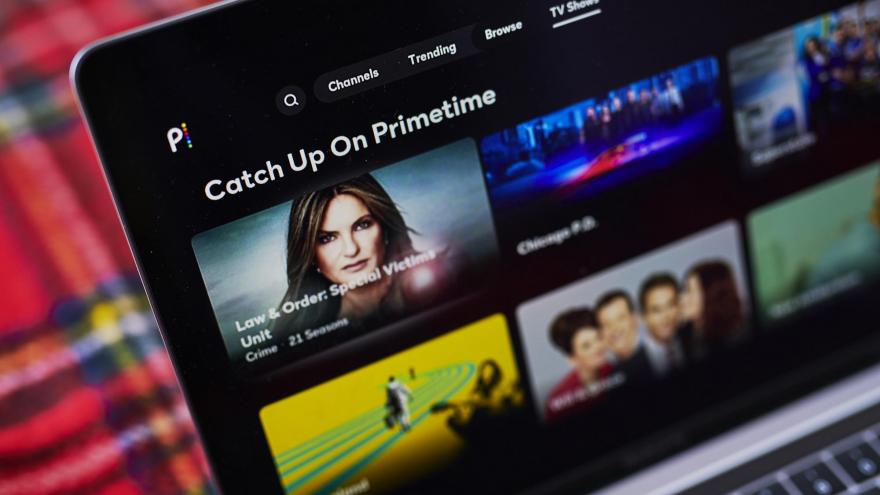 The NBCUniversal Inc. Peacock streaming service is displayed on a laptop computer in an arranged photograph taken in the Brooklyn Borough of New York, U.S., on Monday, April 20, 2020. When the coronavirus quickly spread around the world, NBC had a big decision to make. Move forward with the April launch of Peacock, its new streaming service? Or postpone?

The former vice president's proposal is part of a series of economic plans aimed at jump-starting an economy battered by the coronavirus pandemic.

In a speech detailing the plan Tuesday afternoon in Delaware, Biden called the threat posed by climate change a "once-in-a-lifetime opportunity to jolt new life into our economy."

"We're not just going to tinker around the edges. We're going to make historic investments that will seize this moment in history," he said.

The plan marks a clear shift by Biden toward progressives' goals of urgently reducing fossil fuel consumption to combat climate change. Biden's new proposal is more ambitious than the 10-year, $1.7 trillion plan he'd offered during the Democratic primary, which included the goal of achieving net-zero emissions by 2050.

Biden used the speech to mock President Donald Trump's lack of commitment to addressing climate change. "He said he doesn't like LED because, quote, the light is no good. I always look orange," Biden said.

His proposed 100% clean electricity standard by 2035 is modeled after a proposal initially offered by Washington Gov. Jay Inslee and later embraced by Massachusetts Sen. Elizabeth Warren. The same aim was included in a series of recommendations recently negotiated by a task force made up of members appointed by Biden and Vermont Sen. Bernie Sanders and co-chaired by New York Rep. Alexandria Ocasio-Cortez, a chief proponent of the Green New Deal.

"It's no secret that we've been critical of Vice President Biden's plans and commitments in the past. Today, he's responded to many of those criticisms: dramatically increasing the scale and urgency of investments, filling in details on how he'd achieve environmental justice and create good union jobs, and promising immediate action -- on day 1, in his first 100 days, in his first term, in the next decade -- not just some far-off goals," said Varshini Prakash, the co-founder of the Sunrise Movement.

Biden's aides told reporters on a call Tuesday he would pay for it in part by undoing Trump's tax cuts, raising taxes on wealthy Americans and increasing the corporate tax rate to 28%. They said more details on how Biden will pay for his proposals will come in the weeks ahead, after he unveils other economic proposals.

The clean energy plan marks the second straight week Biden has proposed stimulus spending to bolster a reeling economy as part of his "Build Back Better" agenda. Last week, he called for $400 billion for US-made manufacturing efforts such as clean-energy vehicles, telecommunications equipment, steel and other building materials and health care equipment, as well as another $300 billion in research and development on areas like 5G, artificial intelligence and electric vehicle technology.

It's an approach similar to how former President Barack Obama and Biden entered office in 2009. Biden aides argue that the former vice president's role in enacting the stimulus package back then makes for a strong contrast with Trump, who has not signed into law any major infrastructure plans and whose administration's efforts to make infrastructure the theme of specific weeks -- only to repeatedly be derailed by controversies Trump caused -- has become a long-running joke in Washington.

Biden on Tuesday highlighted his role in the passage of the stimulus in the early days of the Obama administration.

"I know how to get it done. In 2009, President Obama and I inherited an economy in free fall and we prevented a depression," he said.

During the Democratic primary, Biden had expressed skepticism about Green New Deal objectives of net-zero emissions by 2030. Pressed by an activist in New Hampshire, he said he was committed to achieving that goal -- but not on the same timeline progressive activists had called for.

"Joe Biden's economic and climate agenda shows that he is beholden to left-wing ideologues and not to the American people who face the prospect of eliminated jobs and higher taxes under his plan," Republican National Committee spokesman Steve Guest said in an email to reporters.

Biden's campaign said the plan would create union jobs in clean energy and through projects such as the construction of electric vehicle charging stations, the weatherization of millions of buildings, updating electric grids, expanding broadband internet access and more.

In his speech Tuesday, the former vice president was also critical of Trump's handling of the pandemic and his rush to reopen schools and businesses.

"Mr. President, 'open everything now' isn't a strategy for success. It's barely a slogan. Quit pushing the false choice between protecting our health and protecting our economy. All it does is endanger our recovery on both fronts," Biden said.