Biden preparing intensely for Putin's tactics with aides and allies 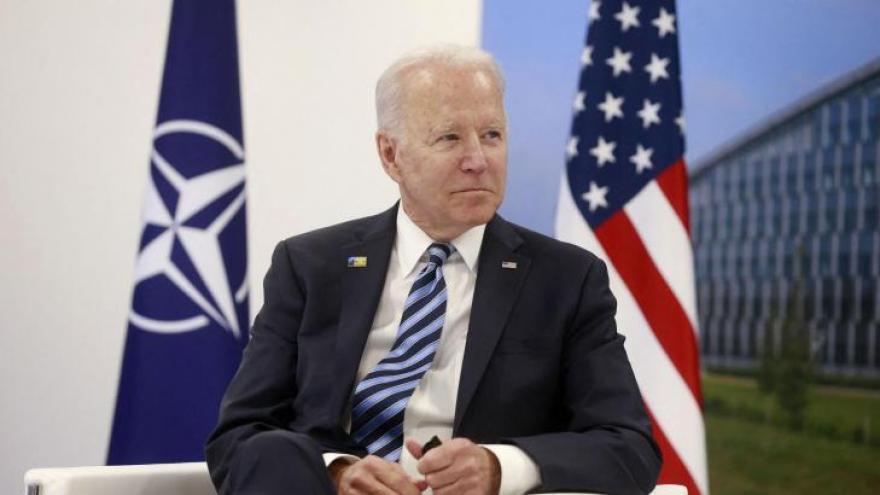 According to officials, President Joe Biden, pictured in Brussels on June 14, uses time away from summit meetings on his European tour for intense preparations ahead of his talks with Vladimir Putin.

(CNN) -- President Joe Biden is using time away from summit meetings on his European tour this week for intense preparations ahead of his talks with Vladimir Putin, according to officials, as he works to avoid the pitfalls his predecessors faced in showdowns with the Russian leader.

Most of his formal meetings this week have started after noon, leaving his mornings free for consultations with advisers. He has held lengthy preparation sessions with senior officials, including Secretary of State Antony Blinken and national security adviser Jake Sullivan, to discuss the wide range of issues he plans to bring up with Putin, from cyberattacks to Syria to Ukraine.

The President has also asked foreign leaders at the G7, including German Chancellor Angela Merkel, for their input as he prepares for the meeting in Geneva, according to people familiar with the conversations. Putin even came up as a point of conversation during his tea with Queen Elizabeth II at Windsor Castle, Biden told reporters, saying she "wanted to know" about the Russian President.

Given some NATO allies had expressed concern about the optics of Biden's summit with Putin, Sullivan said Biden would speak privately with leaders "about what he intends to talk to Putin about" during a meeting of the defense alliance on Monday. "He gets to hear from them as well, so that he will go into Geneva with the full support and solidarity of all of our NATO allies," Sullivan told reporters on Air Force One Sunday, specifically highlighting Biden's meeting with Turkish President Recep Tayyip Erdogan on Monday as a chance to "compare notes."

"Every world leader here that's a member of NATO thanked me for meeting with Putin now. Every single one," Biden said Monday in Brussels where he was attending a summit of the defense alliance. He said he'd found "a consensus and they thanked me for being willing to talk with them about the meeting and what I intended to do."

The US President struck a tough tone while fielding questions from reporters after meeting with the alliance as well as a number of leaders one-on-one. NATO members, he said, must root out corruption and "guard against those who would stoke hatred and division for political gain as phony populism."

It's all part of the tense lead-up to Biden's first sit-down with an American adversary during his time in office, and the scene in Switzerland is beginning to reflect the mood within the White House

Security in Geneva is tightening ahead of the Wednesday summit. Parc La Grange, a park inside Geneva with an 18th century villa where the two leaders will be holding their meetings, has been completely closed to the public since last week and will remain so until at least Friday. Barbed wire has been set up along the perimeter of the park as well as along the street in some areas leading up to the park's entrance.

As Biden becomes the fifth straight American president with whom Putin has met, officials want Biden to be prepared for Putin's tactics, including his well-known habit of turning discussions of Russia's bad practices back on the United States. Biden has told aides he believes Putin will respond to directness during their talks and wants to be ready to offer a frank message.

"He's overprepared!" Biden's wife, first lady Jill Biden, exclaimed last week when asked whether her husband was primed for his meeting with Putin.

Along with Merkel, Biden has opened the door for input to other key allies in bilateral meetings and conversations on the margins over the last several days. The idea serves dual purposes, aides said: While Biden's decades in foreign policy give him a self-assurance about his approach, he sees value in the views of others who have had similar meetings with the Russian leader.

Biden also sees merit in allies feeling a part of his process, as he makes an effort to reassure them in his intentions while bringing them closer as part of a clear US effort to arrive at the Putin meeting after public displays of unity among Western allies, according to a person familiar with the process.

But officials say Biden is also preparing to discuss with Putin areas of potential mutual interest, laying out a potential pathway to move a relationship that he acknowledged Sunday was at a low point. There are obvious issues, ranging from Afghanistan and the Iran nuclear deal to the nuclear capabilities of both nations, where communication and a working relationship is considered critical.

But there are also more incremental steps Biden may propose to establish a baseline between a new administration and a long-standing foe, one person familiar with the preparation said. The goal isn't any kind of dramatic breakthrough, and Biden and his aides alike have been careful to make clear there is no expectation of anything of the sort.

Instead, officials say Biden wants to consider smaller steps that would provide a signal as to whether a baseline can be established in the effort to move toward a more "stable and predictable" relationship, the current stated goal for Biden and his team.

Attempting to deny Putin a platform

Officials also said they were mindful of Putin's desire to appear like he'd gotten the better of a US president, and wanted to avoid a situation that devolved into a tit-for-tat playing out in public.

"This is not a contest about who can do better in front of a press conference or try to embarrass each other," Biden said on Sunday, explaining the decision.

Biden will meet with Putin in two sessions, one a smaller group and one with a larger contingent of aides, according to a White House official.

It was still being worked out with the Russians what the exact composition of each meeting will be, or whether Biden would meet one-on-one with Putin without any notetakers present.

The preparation, and messaging surrounding the summit, has not been completely seamless. Some were surprised on Sunday when Biden seemed to suggest he would be open to an exchange of cyber criminals with Russia, a request Putin had made in an earlier interview with Russia's state-run TASS news agency.

Asked during a press conference whether Biden would be "open to that kind of a trade with Vladimir Putin," Biden responded in the affirmative: "Yes," he said. "If there's crimes committed against Russia, and the people committing those crimes are being harbored in the United States, I'm committing to holding them accountable."

To the fierce Putin critic Bill Browder, the comment was reminiscent of Putin's suggestion in 2018 -- during his joint press conference in Helsinki with Trump -- that Russia might extradite criminals to the US if the US made Americans available to Russia for questioning, including Browder.

"I hope Biden isn't planning to offer me up to Putin in Geneva in the same way that Trump did in Helsinki," Browder wrote on Twitter, calling Biden's remarks "a little worrying."

The President has harbored a skeptical view of Putin for decades. After former President George W. Bush met with Putin in Slovenia in June 2001, Bush said he looked him in the eye and got "a sense of his soul." Biden, then a senator and chairman of the Foreign Relations Committee, responded to those comments by saying, "I don't trust Putin. Hopefully, the president was being stylistic rather than substantive."

Biden has taken a large coterie of aides with him on his first foreign trip. He traveled with Blinken aboard Air Force One to Cornwall, though the secretary of state departed early for Brussels on his own plane. Also on the trip are Sullivan, who has staffed Biden in summit sessions.

The Wednesday summit between Biden and Putin -- and its anticipated outcome -- was the subject of considerable conversation among other leaders gathering for a meeting of their own at NATO Headquarters on Monday.

British Prime Minister Boris Johnson said Biden would "be taking some pretty tough messages to President Putin in the course of the next few days," a comment suggesting that he, too, had discussed the summit with Biden during their back-to-back days of receptions and sessions that he hosted on the first part of Biden's journey.