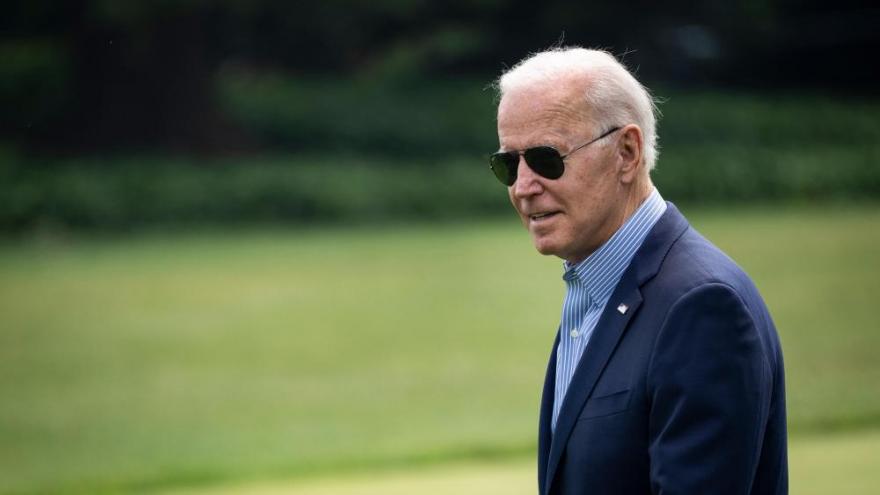 President Joe Biden is visiting Ohio for a CNN town hall on July 21 as his six-month-old presidency reaches a critical juncture.

(CNN) -- President Joe Biden conceded during a CNN town hall on Wednesday that certain businesses will remain "in a bind for a little while" with labor shortages, part of a major set of problems that's unfurling as his six-month-old presidency reaches a critical juncture.

Covid cases are rising, a testament to a vaccination effort that has stalled amid waves of disinformation and skepticism. Pent-up demand has caused an uptick in prices, leading to concerns over inflation. And Biden's much-touted bipartisan infrastructure deal remains in a state of limbo as Republicans and Democrats rush to finalize the plan.

Asked by a restauranteur about how the federal government will incentivize returns to work among industries with labor shortages, Biden said, "I think it really is a matter of people deciding now that they have opportunities to do other things."

"And there is a shortage of employees, people are looking to make more money and ... to bargain. And so I think your business and the tourist business is really going to be in a bind for a little while," the President continued.

Biden's visit to Ohio -- a state that voted for former President Donald Trump in last year's election -- is part of a pattern of visiting red-leaning areas to promote popular proposals, like a child tax credit or free community college.

Upon his arrival in Cincinnati, Biden toured a union training center for electrical workers, part of his efforts to highlight the well-paying union jobs he says his economic plan will help create. He's visited Ohio three times since taking office, tying Michigan and Pennsylvania as his most-visited states -- excluding Delaware, where he spends many weekends.

The President promoted his economic recovery plans but downplayed inflation and job shortages, saying to the town hall audience at Mount St. Joseph University that "the economy is picking up significantly."

He pointed to a recent Moody's Analytics report, which indicated the bipartisan infrastructure plan and the President's $3.5 trillion proposal to widen the social safety net are unlikely to cause high inflation.

The federal response to the coronavirus

The Biden administration is being forced to confront a troubling rise in Covid cases that has now spread to every state in the country. Driven by the highly contagious Delta variant, nearly all new hospitalizations and deaths are among unvaccinated people. But the new surge has already forced some localities to reapply mask mandates.

The President began the town hall event by telling moderator Don Lemon that the current pandemic is one of the unvaccinated.

"It's real simple. We have a pandemic for those who haven't gotten a vaccination. It's that basic," Biden said.

The President said what the White House is "trying to do is use every avenue we can, public, private, government, non-government to try to get the facts out." He pointed out recent testimonials from conservatives, including some from "one of those other networks [that's] not a big fan of mine," in the recent days -- an apparent nudge to recent pro-vaccine comments on Fox News.

Additionally, Biden predicted Wednesday that children under the age of 12 will be able to get vaccinated "soon," pending approval federal public health agencies. He also suggested they'd recommend that kids under the age of 12 "should probably be wearing a mask in school."

The President departed Washington for Cincinnati around the same time the Senate blocked a vote to start debate on the infrastructure plan, a setback to Biden's attempts at fostering across-the-aisle cooperation. Negotiators say they will continue talking in hopes of striking a deal, but now Senate Majority Leader Chuck Schumer must schedule another vote for next week.

Biden's aides have been working behind-the-scenes to bring the deal to fruition. In theory, it would spend $600 billion repairing roads and bridges and bolstering broadband networks, among other physical infrastructure priorities. A separate $3.5 trillion framework being advanced only by Democrats includes the remainder of Biden's family and jobs agenda, including education, housing and child care.

Biden expressed the bipartisan infrastructure framework would pass a motion to proceed on Monday, telling voters at a town hall in Cincinnati, "I take my Republican colleagues at their word. I come from a tradition in the Senate, you shake your hand, and that's it, you keep your word-- and I found (Ohio Republican Sen.) Rob Portman does that."

But the White House recognizes the narrow window he has to push through his agenda before midterm election season begins consuming Washington's political oxygen. They have worked with urgency to sell elements of his plans to the American people, including through town hall events and speeches.

Biden blasted efforts by Republican legislators to curb voting rights, calling it "Jim Crow on steroids," while still maintaining his support for the legislative filibuster standing in the way of passing meaningful voting protections.

The President also once again pledged to fight for the Deferred Action for Childhood Arrivals program, saying that he's "not letting this go."

"They come here with really no choice and they're good, good people," Biden said.

On Friday, a federal judge in Texas ruled that DACA, the Obama-era program shielding certain undocumented immigrants from deportation, is illegal and blocked new applicants.

Biden also sought to counter the Republican argument that the Democratic Party is anti-police, noting the importance of changing police behavior as he advocated for the George Floyd Justice in Policing Act.

The legislation is largely stalled in Congress, with bipartisan negotiations continuing behind the scenes daily as the reality of legislative calendar looms.

Biden continued to call for an investigation into the January 6 insurrection at the US Capitol, saying, "I don't care if you think I'm Satan reincarnate. The fact is you can't look at that television and say, 'Nothing happened on the 6th.'"

Hours before the town hall, five House Republicans were pulled out of participating in the House committee investigation into the January 6 insurrection after House Speaker Nancy Pelosi rejected two of the five Republicans House Minority Leader Kevin McCarthy had selected for the panel.

Rep. Liz Cheney of Wyoming, an outspoken critic of Trump who was one of Pelosi's selections for the investigation, will remain on the committee.

During the town hall, Biden went on to criticize Republicans and conspiracy theories, referring to "venom" being spread and warned that the rest of the world is watching.

Asked how he believes anything can get done in Washington when investigating the insurrection can't even be agreed upon, Biden showed optimism, telling the audience, "I have faith in the American people."

The President also specifically referenced the QAnon conspiracy theory, telling the audience: "The idea that the Democrats or Biden are hiding people and sucking the blood of children ... we've got to get beyond this," adding: "This is not who we are."

Biden said he still believes bipartisanship can produce results in Congress, but conceded that the Trump-era did severe damage to working across the aisle.

"I still believe that's possible, but the well has been so poisoned over the last four years, and even now there's still this lingering effort," he added.

This story has been updated with additional details from the town hall.