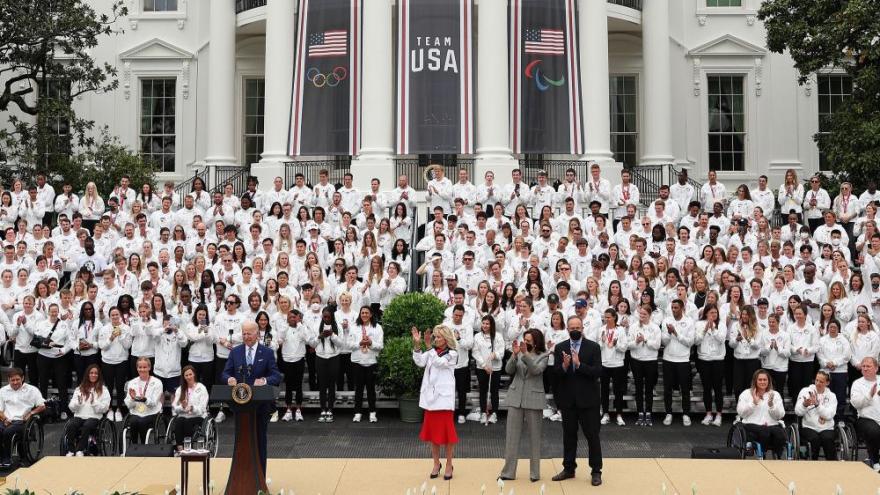 US President Joe Biden praises Team USA in first White House visit since pandemic for 'your endurance and your state of mind'.

(CNN) -- President Joe Biden praised US Olympic and Paralympic athletes at the White House on Wednesday for not only their "incredible athleticism, but your endurance and your state of mind."

It was the first time members of Team USA who competed in the most recent Summer and Winter Games had been welcomed to the White House since the outbreak of Covid-19. The group included competitors from the Summer Games in Tokyo and Winter Games in Beijing.

The large gathering, held outside at the White House, included almost 600 Olympians and Paralympians, more than 200 of whom were medalists.

"I'm sorry you had to wait that year," Biden told the athletes, "between the time it was set and time you got here. I mean, you've been through so damn -- darn much," he said, correcting his language to loud applause and laughs.

The Tokyo Olympics, which was scheduled to take place in 2020, was pushed back a year due to the pandemic. Even with that delay, there were calls for the games to be canceled. Leading Japanese newspaper Asahi Shimbun published an editorial in May 2021 calling for the event to be canceled as the country remained in the grip of the coronavirus pandemic. The newspaper was an official partner of the Tokyo Games. Vaccines were available at the time, but the rollout in Japan had been slow.

Ultimately, the games took place, but without spectators -- an unprecedented moment for the Olympics.

While the Beijing Winter Olympics earlier this year did allow a limited number of fans to attend, the competition took place in a closed-loop system informally known as a "bubble" -- as the Omicron variant of the coronavirus continued its rapid spread.

During both games, the rules "made training and competing especially difficult and draining," Biden acknowledged Wednesday.

"But you did it. You all did it," he told the athletes. "We're in awe not just to your incredible athleticism but your endurance and your state of mind, but most of all your character -- you have such incredible character."

"No matter what event you compete in, you draw inspiration from your work -- your hard work, your courage, your discipline -- as you watch it," Biden continued. "You represent the very soul of America."

The President also joked about his own athletic prowess, saying it was a good thing "the Lord didn't come down and give me a choice between being President and Olympian." He said he had dreams, "and they weren't about being President, they were being about a great athlete."

First lady Jill Biden spoke before the President. She was one of the 950 VIPs invited to attend the Olympic opening ceremony in Tokyo, where, during her brief time attending the games, she took to the role of cheerleader in chief. Biden said that when his wife returned from Tokyo, "All she could do is talk about y'all constantly."

The US did not send an official delegation to the Beijing Olympics as a statement against China's "ongoing genocide and crimes against humanity in Xinjiang," White House press secretary Jen Psaki said at the time.