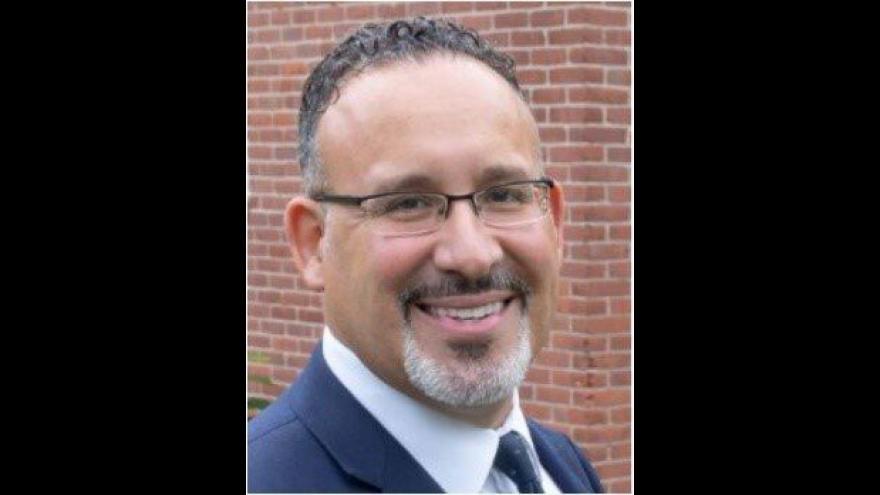 (CNN) -- President-elect Joe Biden is poised to nominate Connecticut education commissioner Miguel Cardona as his education secretary, two people familiar with the matter say, a decision that could be one of the final Cabinet selections before Christmas.

Biden has set a goal of reopening most schools within the first 100 days of taking office, a position that has touched off controversy with some teachers' unions. Cardona has been a leading proponent of sending children back to school, saying too many students are falling behind during virtual learning amid the coronavirus pandemic.

Biden has pledged to select a schoolteacher to serve as education secretary. Cardona fits that bill, starting his career nearly two decades ago as an elementary school teacher in Connecticut before becoming a principal. He was named the state's top education official in August 2019.

Cardona, whose parents moved from Puerto Rico to Connecticut, would be another high-profile Latino in the Cabinet if confirmed by the US Senate. The Congressional Hispanic Caucus has urged Biden to select Cardona.

A formal announcement could come as early as Wednesday.

After education secretary, Biden will have five Cabinet-level positions still to name -- chief among them attorney general. That decision is no longer expected to be announced before Christmas, a person familiar with the matter tells CNN, as Biden continues deliberating on one of the most high-profile positions in his incoming administration. The delay puts him behind his recent predecessors in the timing of choosing a nominee to lead the Justice Department.

Cardona was appointed Connecticut's commissioner of education by Democratic Gov. Ned Lamont in August 2019. He came to the role with two decades of experience as a public school educator from the city of Meriden, according to the state's government website, after beginning his career as an elementary school teacher and later serving for 10 years as a school principal. In 2013, Cardona became the assistant superintendent for teaching and learning.

The nomination will come as Biden faces pressure to follow through on his pledge to nominate a Cabinet that reflects the diversity of America.

CNN previously reported that Cardona was being considered for the role. Lily Eskelsen García, who was president of the National Education Association for six years, Leslie Fenwick, the dean emeritus of the Howard University School of Education and an education policy professor, and Sharon Contreras, the Guilford County, North Carolina, schools superintendent, were also being considered for the job.

Biden has said that getting kids back to school safely is one of his top priorities when he takes office in January. In a recent speech, he said that if Congress provides the necessary funding to protect students, educators and staff and Americans follow strong public health measures, "my team will work to see that a majority of our schools can be open by the end of my first 100 days."

He has also proposed structural changes to the US education system. During his presidential campaign, Biden proposed guaranteeing two free years of community college or other training as part of a higher education plan that would also aim to cut student loan obligations. His plan includes new spending aimed at improving access to college for low-income individuals, minorities and undocumented immigrants who were brought to the United States as children.

The President-elect frequently praises educators and touts his wife's education background. Incoming first lady Jill Biden holds a doctorate in education and has said that she plans to continue working as a professor when Biden becomes president. She taught English at Northern Virginia Community College during the eight years she served as second lady.

This story has been updated with additional information about Cordero, Biden's education and coronavirus plans, and reporting about Biden's announcement for attorney general.