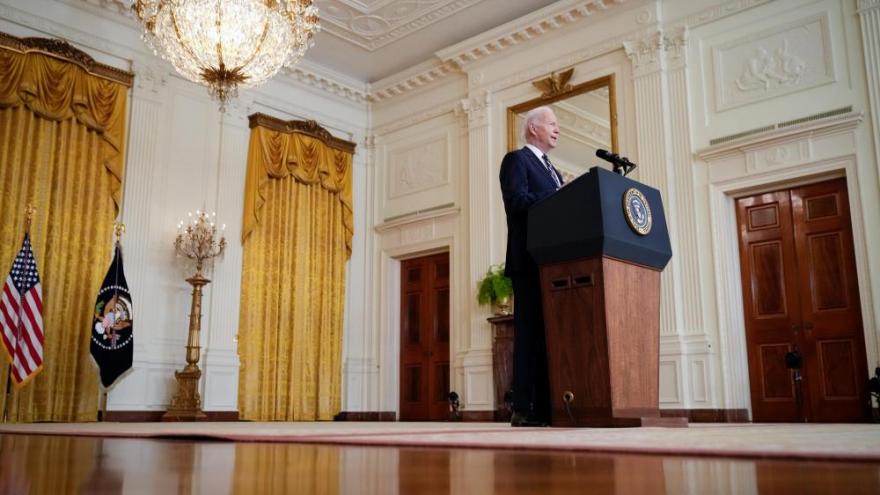 U.S. President Joe Biden speaks on developments in Ukraine and Russia, and announces sanctions against Russia, from the East Room of the White House on February 22.

(CNN) -- President Joe Biden on Tuesday pledged that his administration is using "every tool at our disposal" to limit the effect on gas prices in the US of sanctions he announced against Russia, acknowledging that Americans will likely see rising prices at the pump in the coming months.

However, Biden did not say what specific actions his administration plans to take to stabilize gas prices for US consumers -- something any American president has a limited ability to do.

"As I said last week, defending freedom will have costs, for us as well and here at home," Biden said. "We need to be honest about that. But as we do this, I'm going to take robust action to make sure the pain of our sanctions is targeted at the Russian economy, not ours."

Moving forward, Biden said that the administration is "closely monitoring energy supplies for any disruption."

"We're executing a plan in coordination with major oil producing consumers and producers toward a collective investment to secure stability and global energy supply," he told reporters in the White House East Room. "This will be -- this will blunt gas prices. I want to limit the pain the American people are feeling at the gas pump. This is critical to me."

The President has taken political hits for the higher costs Americans have felt as a result of increasing gas prices and other inflationary pressures ahead of November's midterm elections, when Democrats are trying to maintain control of Congress.

The President's comments came as he announced what he called a "first tranche" of new sanctions against Russia, including on two large financial institutions, Russian sovereign debt and Russian elites and their family members. He said the moves would effectively "cut off Russia's government from Western finance."

A senior administration official later told reporters the White House was "quite deliberate" in ensuring "the pain of our sanctions is targeted at the Russian economy, not ours."

"None of the measures are designed to disrupt the flow of energy to global markets, and we are now executing a plan, in coordination with major oil consumers and oil producers, towards our collective interest to secure the stability of global energy supplies," the official said.

The official said the US worked in "very close consultations overnight with Germany" ahead of Chancellor Olaf Scholz's announcement earlier Tuesday that he'd stopped the certification of the Nord Stream 2 pipeline with Russia following Moscow's actions in eastern Ukraine.

The official added that rising gas prices are not the direct result of the pipeline's halt, but over fears that Russian President Vladimir Putin might weaponize energy supply to "hold the world hostage."

The 750-mile pipeline was completed last September but has not yet received final certification from German regulators. Without that certification, natural gas cannot flow through the Baltic Sea pipeline from Russia to Germany.

Gas supplies from Russia play an essential role in power generation and home heating in central and eastern Europe, and Germany is Russia's largest gas customer. But the US, the United Kingdom, Ukraine and several European Union countries have opposed the pipeline since it was announced in 2015, warning the project would increase Moscow's influence in Europe.

The official added that Tuesday's decision serves to "reduce Europe's addiction to Russian gas," adding that the US will work in concert with allies to surge national gas supplies from other sources in an effort to address shortages.

Deputy national security adviser Daleep Singh said at a White House briefing later in the day that the administration's efforts first include "coordinating our actions with major energy producers. We all have reserves at our disposal, and those reserves could help support the supply of energy worldwide."

Second, Singh said, several of those major energy producers "have the spare capacity to provide supply to global energy markets and to balance the market in the event of any supply disruption."

"Number three, we can work with energy companies to surge their capacity to supply energy to the market, particularly as prices rise. And number four, we can be very clear that if President Putin weaponizes energy supply, it will be met with massive consequences and it will only accelerate the diversification of Europe and the world away from Russian energy," he added.

Biden had indicated earlier this month that the US is evaluating how it could help Europe with alternative energy supplies in case of a conflict with Russia -- currently the second largest oil producer in the world.

American oil prices are at seven-year highs and gasoline prices have climbed sharply. The current price is just under $100 per barrel. According to AAA, the national average for gasoline is $3.53 a gallon, up 20 cents in the past month.

Inflation, meanwhile, continues to weigh on Americans' minds, with consumer confidence slipping again in February, according to a new report from the Conference Board. Prices keep rising across the nation, particularly when it comes to energy, and gas is a staple for many driving up household spending.

The White House knows how deeply unpopular high gas prices are. That's why Biden took sweeping action in November to intervene, announcing the largest-ever release of emergency crude reserves from the Strategic Petroleum Reserve in US history.

But the effect of the release of these reserves was limited.

Just two months after Biden's historic intervention, he's under pressure to tap the SPR again. But those emergency reserves have a finite number of barrels.