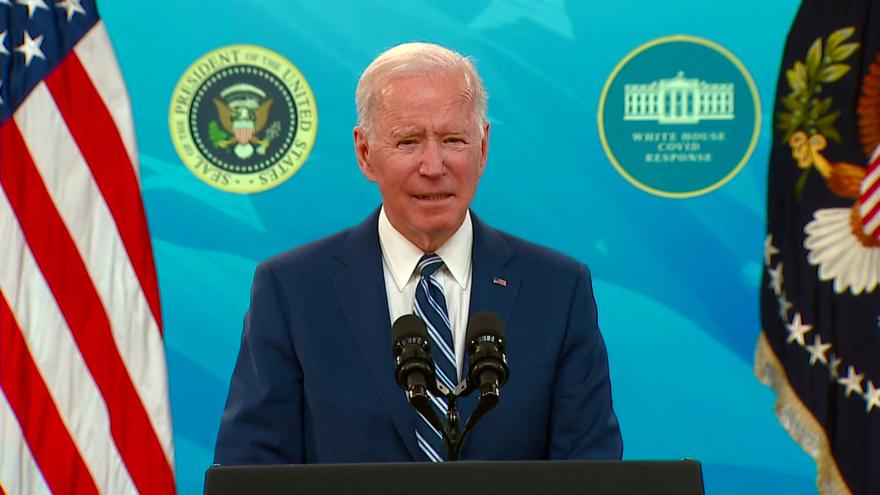 (CNN) -- President Joe Biden is warning states that are rushing ahead with opening businesses, bars and restaurants to slow down as one of his top health chiefs warns of "impending doom" over a possible new Covid-19 surge.

"Our work is far from over. The war against Covid-19 is far from won. This is deadly serious," the President said on Monday in an event highlighting the stunning expansion of vaccine programs, which was juxtaposed with alarming figures showing rising cases of the virus across the country

The signs of a new wave of cases come several weeks after governors, including high profile Republicans in Texas and Mississippi, reacted to the ebbing of new infections after a winter surge by dropping mask mandates and many Covid-19 restrictions. It also came after scenes of mass crowds of young revelers in Florida during spring break. The easing restrictions are not limited to red states however, with people across the country frustrated with social distancing after a year separated from family and friends.

Biden, however, pleaded with Americans to stay patient for a little longer, to avoid unnecessary deaths in what could be the end game of the pandemic.

As he left the event in the White House complex, Biden was asked whether states should pause openings and he turned and said, "Yes."

The nation is caught on a ledge between triumph and a late game disaster in a fight against a pathogen ideally suited to exploit lapses in public health, resistance to mask wearing mandates and the frayed patience of a country disorientated after a year when normal life went into hibernation.

Dr. Rochelle Walensky, the director of the US Centers of Disease Control and Prevention, encapsulated the strange duality with a stark warning that contrasted with a message of hope on Monday as total US Covid deaths hit 550,000.

"I'm going to pause here. I'm going to lose the script, and I'm going to reflect on the recurring feeling I have of impending doom," Walensky said during a virtual White House briefing.

"We have so much to look forward to, so much promise and potential of where we are and so much reason for hope," Walensky said. But she added: "I know what it's like as a physician to stand in that patient room -- gowned, gloved, masked, shielded -- and to be the last person to touch someone else's loved one because their loved one couldn't be there."

Given the huge promise of vaccines and a coming spike in supply, Walensky's caution amounted to an implicit acknowledgment that in the coming weeks and months, people will die from Covid-19 who did not have to. America right now is like a nation in sight of parole after a long-term sentence and must maintain good behavior for a few more weeks to secure its release.

The delicate mix between offering the country hope and pleading with citizens not to throw themselves back into normal life too soon may actually be made more difficult by the roaring success of the vaccine effort. On Friday, Saturday and Sunday, the US reported a total of more than 10 million new shots in arms. That means roughly 1 in 33 Americans was injected over that period alone.

Most people by now know someone who is at least partially vaccinated. So, it's human nature that, with the end potentially in sight, observance to strict social distancing protocols may be ebbing.

As a down payment on deliverance meant to serve as an incentive for citizens to show a little more forbearance, the President announced that increasing vaccine supply meant that in just three weeks 90% of adults -- or everyone over the age of 18 -- would be eligible for a vaccine. That doesn't mean that everyone will be able to find an appointment immediately. But Biden also pledged that most Americans would soon be able to get their shot within five miles of home.

'We can win this'

In some ways, the current situation in the US is analogous to last summer, when the first wave of Covid-19 had subsided -- though back then there was not the imminent prospect of everyone being vaccinated.

One other significant difference is that the current occupant of the White House is in lock step with public health officials in urging caution -- Biden told reporters after his remarks Monday afternoon that he wanted state governors to pause openings.

Ex-President Donald Trump did not just support early easing of restrictions in defiance of his own government's recommendations last summer, he goaded governors to go faster. The result was a murderous wave of infections and deaths across the Sunbelt.

That move was harshly criticized by the former coordinator of the ex-President's coronavirus task force Dr. Deborah Birx, who argued in a new CNN documentary that aired Sunday evening that hundreds of thousands of Americans who died from Covid-19 could have been saved. In the same program, "Covid Wars: the Pandemic Doctors Speak Out," Dr Anthony Fauci, the government's top infectious diseases specialist, said Trump's attitude last summer was like "a punch to the chest."

Trump responded to the comments from Birx and Fauci in the documentary in a rambling statement full of falsehoods. He called the two widely respected medical experts "self-promoters trying to reinvent history to cover for their bad instincts and faulty recommendations" -- a criticism often aimed at his own disastrous handling of the pandemic while President. By admitting that he often ignored their recommendations, Trump all but took responsibility for his administration's botched handling of the pandemic.

On Monday, Fauci echoed the new President's message that something like normal life could soon return if Americans stayed patient for a few more weeks.

"We really need to hold on to the public health measures as we get more and more people from two- to three-plus million people vaccinated every day," Fauci said. "It will be a race between the vaccine and what's going on with the dynamics of the outbreak."

"And we can win this by just hanging in there a bit longer."

The rising optimism brought by vaccines is countered by alarming data on the new viral wave predicted by experts for several weeks as some state governors rushed to ease restrictions on bars, restaurants and other businesses.

Walensky reported that new Covid-19 cases had risen 10% in a week from an already-high base, to 60,000 per day. Hospitalizations and deaths are also up.

New infections are now rising in 27 states following a long march down the mountain following a horrific winter. Michigan has seen the most dramatic increase with cases shooting up 56% over the last week, and there are also large rises in Louisiana, Connecticut, North Dakota and Iowa.

Experts say the B1.1.17 variant of the virus first discovered in the United Kingdom, which appears to be more transmissible and deadlier, is spreading more quickly in the US. Officials say that a rising proportion of the infections are occurring among younger people who are moving around and breaking social distancing.

Ali Mokdad, a professor at the Institute for Health Metrics and Evaluation at the University of Washington, projects that after a spike in March and April, vaccinations and summer weather will cause the virus to trend downwards in the coming months before it reemerges in the winter.

"What will determine how big that spike is, is what number we start from. So if we control it in summer, we will have a mild winter. We have to increase the mask wearing in winter. It's very important. You may have to beef it up to 95% (of people wearing masks) and the vaccines will help us to reduce mortality and admissions to the hospital because they're very effective," Mokdad told CNN's "What Matters" newsletter Monday. One caveat however is if a new variant develops that renders vaccines ineffective.