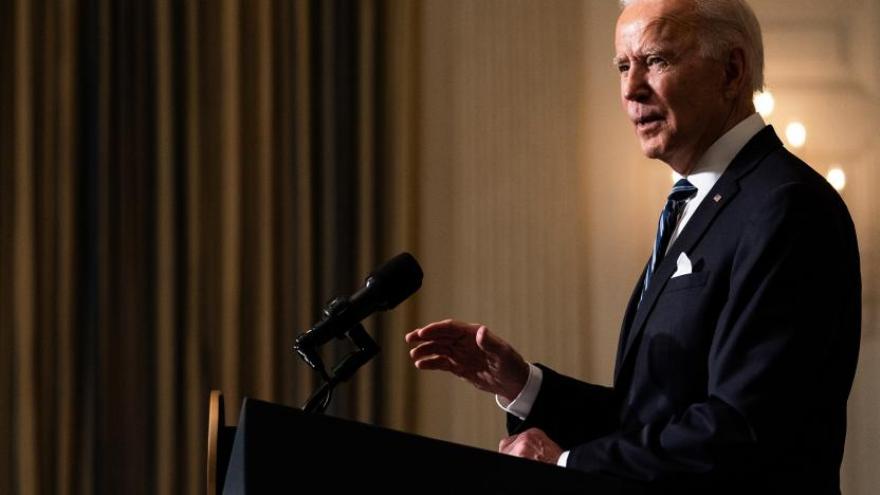 President Joe Biden speaks about climate change issues on January 27. He plans to deliver a major foreign policy speech this week, according to sources.

(CNN) -- President Joe Biden plans to deliver his most substantive foreign policy remarks since becoming president on Monday, according to a senior administration official, marking his opening attempt at pivoting away from his predecessor's "America First" approach to the world.

Biden's speech will center on the theme of "restoring America's place in the world," one of his central campaign promises, and will coincide with his first trip to a Cabinet agency. He plans to visit the State Department to meet newly installed Secretary Antony Blinken, press secretary Jen Psaki said Friday.

Making his first stop there, rather than the Pentagon or CIA, is meant to underscore Biden's renewed focus on repairing American alliances and using diplomacy as a tool abroad, an official said.

While his speech is not expected to outline in detail the specifics of a new strategy on China, Iran, North Korea, Russia or other US adversaries, he will seek to frame his foreign policy around shoring up alliances and returning to multilateralism after the Trump administration, which was marked by unilateral actions and disdain for traditional diplomacy.

Biden has spoken by phone to roughly a half-dozen foreign counterparts since taking office but has been focused in public mainly on the coronavirus pandemic and domestic executive actions. He did rejoin the Paris climate accord and the World Health Organization, signaling his intent to renew American commitments abroad.

A draft calendar of the administration's opening days obtained by CNN listed "Restoring America's place in the world" as a theme for February.

Biden campaigned on a promise to renew American alliances that had been strained under former President Donald Trump. His phone calls last week to the leaders of Canada, Mexico, the United Kingdom, France, Germany and Japan all sought to reinforce his pledge to strengthen ties to traditional US allies.

He did speak with one adversary -- President Vladimir Putin of Russia -- in a call described by officials as businesslike but direct. The White House said Biden addressed a range of issues, including cybersecurity and the poisoning of opposition leader Alexey Navalny.

Blinken, who was sworn in last week, spoke out Sunday against "harsh tactics" being used against pro-Navalny protests across Russia.

"We renew our call for Russia to release those detained for exercising their human rights," he wrote.

The State Department that Biden will visit Monday suffered a sharp decline in morale under Trump, who liked to refer to the agency as the "Deep State Department" and consistently eyed its career professionals with skepticism.

Last week, Blinken addressed the mood in his first remarks to employees, and said he was ushering in a new era.

Biden is expected to thank State Department employees when he visits the building Monday.