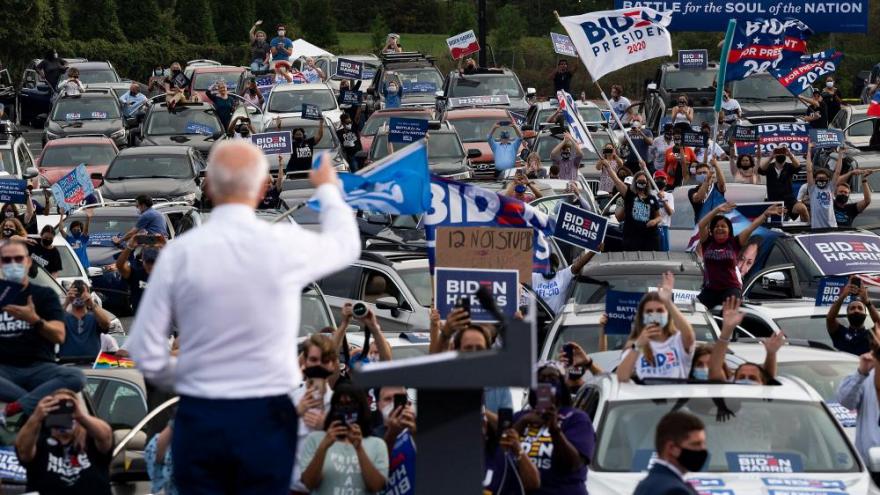 "The numbers tell us a clear and convincing story. We are going to win this race," Biden said, in a brief statement Friday night in which he called for calm and patience at a moment of high political tension as vote counters in the pivotal states -- Pennsylvania, Georgia, Nevada and Arizona -- worked through mountains of mostly mail-in ballots.

Biden had already pivoted from a campaigning tone and expressed the need for unity and healing, as he seeks to build a foundation for a presidency that will unfold after a tumultuous political period and that he will need to tackle a pandemic that is getting alarmingly more serious every day.

By contrast, Trump, who did not appear to have come to terms with his apparently impending defeat before the race was called and was seen arriving at his golf course in Virginia Saturday, had been firing off new and unsubstantiated allegations of massive voter fraud and irregularities in a manner that suggests the transition of power could be an acrimonious process.

"I WON THIS ELECTION, BY A LOT!" the President tweeted in contradiction to the growing vote tally favoring Biden shortly before CNN projected the race. Since the final polls closed Tuesday, Twitter has applied warning labels to more than a third of Trump's tweets, flagging a handful of his messages Saturday as misleading.

The Democratic nominee stretched his leads in Georgia and Nevada and was holding off the President's challenge in Arizona, as vote counting continued Saturday, but Pennsylvania pushed him over the top to clinch the 270 electoral votes needed to win the presidency.

In the latest batch of results from the Keystone State, Biden expanded his lead over Trump, which is now up to more than 34,000.

Biden leads Trump by more than 22,000 votes in Nevada and is ahead by more than 7,000 in Georgia. Trump is cutting the Democrat's lead in Arizona, which is down to 20,573 votes with 97% reported, but it is not clear whether his margins are sufficiently wide to overtake his rival in the state with 235,000 votes still to be counted.

The Biden currently leads the President by 273 to 213 electoral votes, CNN projects.

Biden's late-night appearance in Wilmington, Delaware, on Friday struck a contrast to Trump's grievance-filled speech the night before, in which the President flung false claims that the election is being stolen and vowed to fight on in the courts. Claiming a mandate to ease the nation's angry divides, the former vice president -- who first unsuccessfully ran for President in the 1988 campaign -- vowed that life in America under a Biden administration would be less angst-ridden and acrimonious, and on the worst day yet for Covid-19 infections -- more than 125,000 -- he offered condolences to those who have lost loved ones.

Trump has not appeared in public after his grievance- and lie-filled news conference at the White House on Thursday, and as a battle of wills began to emerge between the President and Biden's camp over the election endgame. Trump said in a tweet that Biden should not "wrongfully claim" the office of president and promised legal proceedings to try to hang on to his job. But so far the Trump campaign has offered conspiracy theories and accusations but little concrete evidence to back up its claims of corruption in the election.

The former vice president's surprising strength in Georgia stemmed from huge turnout from Black voters in Fulton County and other suburbs around Atlanta, fatigue with Trump in Georgia's fast-growing suburbs -- which have become increasingly young and diverse in recent years -- and assiduous work over more than a decade to boost Democratic registration in the state.

"Right now, Georgia remains too close to call. Of approximately 5 million votes cast, we'll have a margin of a few thousand," Georgia Secretary of State Brad Raffensperger said in a news conference Friday, adding, "with a margin that small, there will be a recount in Georgia."

There is no automatic recount in Georgia, but a candidate can request a recount after votes are certified if the results are within 0.5%.

Trump's campaign general counsel Matt Morgan said in a statement earlier Friday, "Georgia is headed for a recount, where we are confident we will find ballots improperly harvested, and where President Trump will ultimately prevail."

No Democratic presidential nominee has won the state since Bill Clinton in 1992. Clinton narrowly defeated former President George H.W. Bush in that state in part because he and Bush were in a three-way race that included Ross Perot, an independent candidate for the presidency.

Trump refuses to back down

As the drama unfolded across the country, the President's allies launched legal challenges and floated conspiracy theories while Trump tweeted "Stop the Count!"

On Thursday night, Trump effectively sent a signal that he has no intention of leaving power without a fight. The speech from the White House briefing room -- in which Trump falsely claimed that votes that were cast before and during the election, but counted after Election Day, are illegal votes -- could end up being one of the most dangerous presidential statements in American history.

The President also made ludicrous claims that his leads on election night shrunk because Democratic officials keep finding ballots, when in fact the counts have narrowed because election officials in many states counted the vote-by-mail ballots, which favored Democrats, after the Election Day votes, which tended to favor Republicans.

Utah Republican Sen. Mitt Romney tweeted Friday that Trump's comments about a rigged election "damages the cause of freedom here and around the world," going further than the rest of the Senate GOP conference, where some top Republicans have continued to defend Trump's baseless claims of voter fraud.

As the President spoke Thursday night, the daily tally of new US coronavirus infections hit 114,876, encapsulating how Trump's political obsessions have driven his neglect of a crisis that has killed more than 236,000 Americans.

It has long been known that Biden would benefit from a late surge of mail-in balloting that was preferred by Democrats amid the pandemic. The President spent months on the campaign trail, falsely blasting mail-in ballots as prone to fraud -- one reason why GOP voters have proven far less likely to use them.