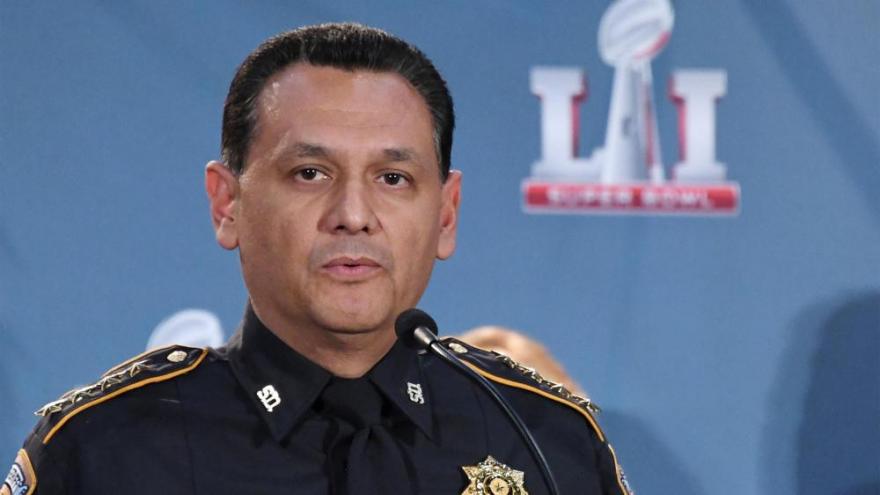 Gonzalez, who was elected sheriff of Harris County in 2016, has a decades-long career in law enforcement, according to his biography. He criticized the Trump administration for its stances on border and emergency management issues, and at one point withdrew his department from a controversial ICE program.

He had made those comments amid Trump-era plans for ICE raids across the country to arrest thousands of migrant families who already had court orders to be removed. At the time, Trump repeatedly tweeted about an impending operation, a striking move given that operations are not usually announced ahead of time.

The Biden administration has sought to narrow the scope of the agency's enforcement efforts, choosing to focus resources on immigrants who pose national security, border security or public safety risks.

If confirmed, Gonzalez would be the first politically appointed director in years. ICE, which is currently led by career official Tae Johnson, never had a Senate-confirmed director during the four years of the Trump administration.

Gonzalez also pushed back in 2018 when Trump suggested that a main reason the US Coast Guard was so busy rescuing people during Hurricane Harvey -- which made landfall in Texas and left an estimated 30,000 people in need of temporary shelter -- was that people were watching the storm on boats.

"I didn't see anyone taking the approach that would reflect his comments," Gonzalez told the Houston Chronicle at the time. "I'll be sure to invite the President to ride out the next hurricane in a jon boat in Galveston Bay the next time one approaches."

At the beginning of the Trump administration, Gonzalez ended a partnership with ICE's controversial 287(g) program, a collaboration between the federal government and state and local police officers to enforce federal immigration laws, according to Houston Chronicle reporting at the time.

He told the Chronicle that it was an "issue of resources," not a political move, adding that his department would still cooperate with local, state and federal authorities as it always had.

Gonzalez, a lifelong Houstonian, also criticized family separation, the result of the Trump administration's "zero tolerance" policy of prosecuting adult migrants who illegally crossed the border, which led to the separation of thousands of families.

"Separating families who arrive at our border harms children and is an affront to American values. Children should not be in immigration detention, period," Gonzalez tweeted in 2018.

His Twitter feed is also full of positive affirmations and updates on the sheriff's office.

On Tuesday, he wrote, "Good Tuesday morning! You have the opportunity to help others grow and lift them up. Embrace these precious opportunities!" along with a Maya Angelou quote.

"With a distinguished career in law enforcement and public service, Sheriff Gonzalez is well-suited to lead ICE as the agency advances our public safety and homeland security mission. I hope the Senate will swiftly confirm Sheriff Gonzalez to this critical position," he said in a statement.

Gonzalez is the 30th sheriff of Harris County, leading the largest sheriff office in Texas and the third-largest nationally, with around 5,000 employees. He was reelected to a second term in 2020.

He previously served as a police officer with the Houston Police Department and served three terms on the Houston City Council.