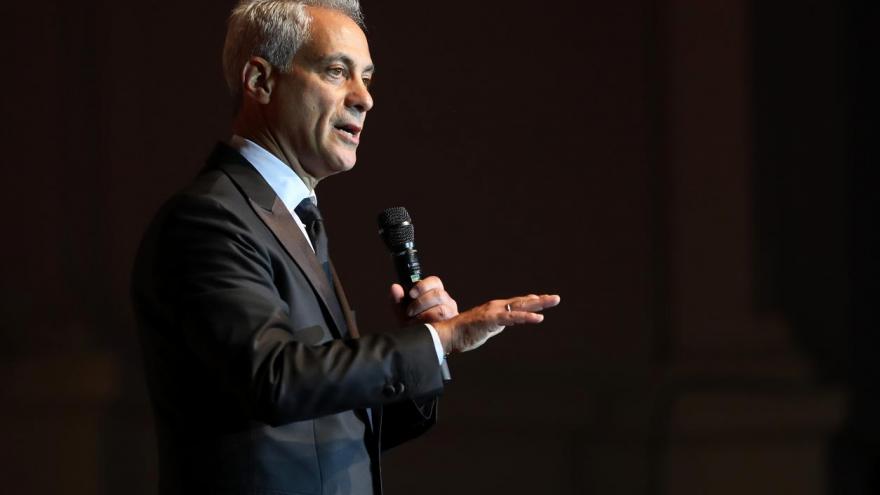 President Joe Biden announced his intention to nominate Rahm Emanuel, pictured here on September 20, 2018 in Chicago, Illinois, as ambassador to Japan and Nicholas Burns as ambassador to China.

The two top diplomatic positions have been in the works for months but made official only in a late-afternoon announcement by the White House during the middle of the biggest foreign policy crisis of the administration so far -- the US withdrawal from Afghanistan amid a Taliban takeover.

Emanuel, who has drawn the ire of progressive Democrats, is a former mayor of Chicago, chief of staff to President Barack Obama, a senior adviser for President Bill Clinton and a member of Congress representing Illinois.

Emanuel was under consideration for a number of jobs within the Biden administration, including transportation secretary. But his long track record in Democratic politics is likely to be overshadowed by a series of controversies during his time as mayor of Chicago when he eventually faces during his confirmation hearing. The city's crime rate and the police shooting of African-American teenager Laquan McDonald -- a major reason he did not seek a third term as mayor -- are questions he could face during Senate confirmation.

In 2015, Emanuel apologized for the circumstances surrounding the death of McDonald, including the fact it took 13 months before police dashboard camera video of the shooting became public and the officer who killed him was charged. Emanuel rejected calls for him to step down and denied that he was involved in keeping the video from being released.

Burns, a career diplomat and longtime foreign policy hand, has served presidents of both parties. If confirmed, he would assume one of the most critical ambassador posts in the administration, with the rise of China at the center of almost important policy discussions.

The Biden administration has faced a vast set of challenges when it comes to Beijing, including human rights abuses, the ongoing pandemic, the country's military role and its influence efforts abroad. Officials previously indicated that the administration intended to fill the ambassador role with someone who has extensive diplomatic experience and Burns' selection signals where the US' priorities lie with China.

Burns is a former member of the Foreign Service and served as Under Secretary of State for Political Affairs, Ambassador to NATO and to Greece, State Department spokesman, and on the National Security Council staff on Soviet and Russian Affairs. He currently serves in roles at Harvard University's Kennedy School of Government, the Aspen Strategy Group and Security Forum, and the Cohen Group.

The White House on Friday also announced the nomination of Michael Battle to serve as ambassador to Tanzania.

Battle's work has spanned diplomacy to theology in academia to the military. Notably, he was the US representative to the United Nations Economic Commission for Africa and the US ambassador to the African Union in Addis Ababa, Ethiopia.

These are the latest ambassador nominations from Biden, who has moved more slowly than nearly all recent presidents in choosing his envoys, all of whom face Senate confirmation.

And currently, despite Biden having been in office for more than six months, the only ambassador to a nation confirmed so far has been Ken Salazar's post to be US ambassador to Mexico. He was confirmed a week ago.

The President went more than two months into his presidency without naming a single ambassador to send overseas. But in the last month alone, his nominations have included ambassadorial nominations to Equatorial Guinea, Switzerland, Argentina, Singapore, the Central African Republic, Spain, and Mozambique, among other ambassador-rank positions.

Despite the pace having picked up on nominations, there are still key vacancies among US ambassadorships. And while Biden has made nominations, the US does not have any confirmed ambassadors installed in key countries such as China, Canada, India, France or Israel.