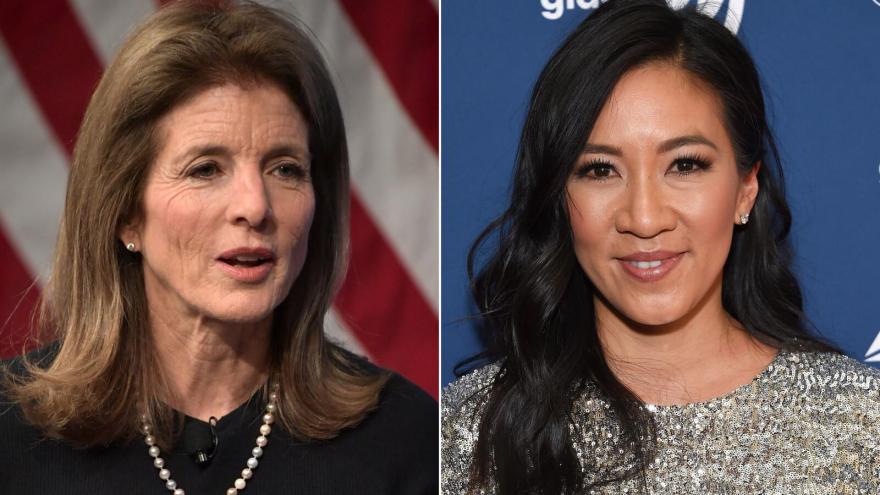 The White House made the announcements in a statement on Wednesday, the latest ambassador selections to be sent to the US Senate, where dozens of nominees are still awaiting confirmation.

In July, CNN reported that Kennedy was the leading contender for the Australia post. The daughter of former President John F. Kennedy is a longtime friend, ally and donor to Biden and endorsed the President's candidacy early in the 2020 campaign, speaking at the Democratic convention

In a statement, Kennedy called Australia "a country that is as vital to our future security and prosperity as Australia."

"I am always grateful to the courageous Solomon Islanders and Australian coast watchers who rescued my father during World War 2, and if confirmed, I will work hard to repay this debt," Kennedy said in a statement. "I look forward to collaborating with the Government of Australia to strengthen our alliance, improve global health and increase vaccine access during this terrible pandemic and to address the urgent climate crisis. I am excited to get to know the Australian people, learn about their fascinating country and share with them what I love most about America."

Kennedy's appointment to Australia reflects the high priority the Biden administration is placing on the Asia-Pacific as it deals with an increasingly assertive China in the region and on the world stage. The US and Australia share close trade ties and a robust military relationship, fighting side by side in every major conflict since World War I. The two countries are also members of the "Five Eyes alliance," an intelligence-sharing arrangement among the English-speaking democracies of the US, Australia, Canada, New Zealand and the UK.

If confirmed, Kennedy would come to the job with previous experience in the region. A graduate of Harvard University and Columbia University Law School, she served as ambassador to Japan from 2013 to 2017 as an Obama administration appointee. In Tokyo, Kennedy worked on military and trade, among other issues, and became the second US ambassador to attend an annual memorial service marking the US atomic bombing of Hiroshima.

Kennedy's prior experience includes work at the Metropolitan Museum of Art and New York City's Department of Education, as well as with her family's foundations. She has edited best-selling books about American history, politics and poetry, and co-authored two books about civil liberties.

In a reflection of Biden's close relationship with the Kennedy political dynasty, Caroline Kennedy is the second family member he has nominated to fill a diplomatic post. The President has tapped the late Sen. Ted Kennedy's widow, Victoria, to be his envoy in Austria.

Kwan, who worked on the Biden campaign and has been pressing for an ambassador post, said she was honored by the nomination.

"If confirmed, I will be very proud to serve my country," Kwan said. "Belize is full of incredible history and culture, and has been a tremendous partner to the United States. I look forward to working with the Belizean government on economic issues, to put an end to this pandemic, and to address the root causes of migration."

This story has been updated with additional background details.