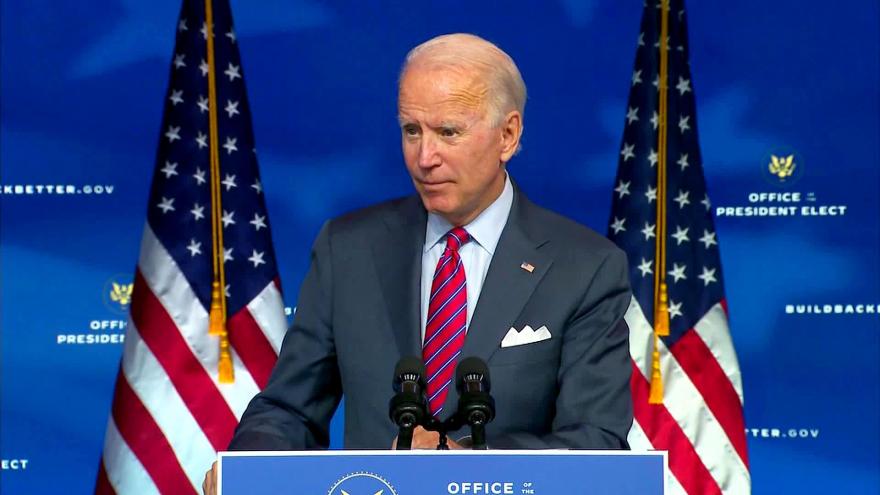 (CNN) -- The incoming Biden administration plans to retire the name for the coronavirus vaccine effort under President Donald Trump -- Operation Warp Speed -- with a transition official for the incoming president telling CNN they are "moving to a new phase" of the coronavirus response.

"Operation Warp Speed was the Trump administration's name for their response. We are structuring it differently and ours will have a new name," said an official, who added that many of the "people who are working for Warp Speed who were critical to that operation will be critical to our response, too."

As part of that effort, Biden has picked Dr. David Kessler, a former head of the US Food and Drug Administration, to be the chief scientific officer of Covid response, Biden's presidential transition team announced Friday.

Kessler, who is currently the co-chair of the Biden transition's coronavirus task force, will work out of the US Department of Health and Human Services under HHS secretary-designee Xavier Becerra, the official said, and his role will focus primarily on maximizing the supply of vaccines that are authorized or approved, and getting other vaccines online. The process of getting shots in arms will be run out of the White House and the team led by Jeff Zients, the official said.

Operation Warp Speed has been successful in rapidly manufacturing a safe and effective Covid-19 vaccine but has failed to meet expectations in administering doses to Americans. Biden has laid out a timeline for 100 million shots in the first 100 days of his term.

Gen. Gustave Perna, who is currently the chief operating officer of Operation Warp Speed, will stay on in the Biden administration, the official said, but under its "new structure."

Slaoui will stay on for another month to "ensure a smooth transition," a Biden transition official told CNN earlier this week.

Kessler was first appointed by Bush to lead the FDA in 1990 and oversaw the rollout of the agency's iconic "Nutrition Facts label" on packaged foods for the first time. He also helped streamline the FDA's drug approval process and led the agency during the AIDS/HIV epidemic.

Kessler was also an outspoken advocate for more regulation of nicotine and launched an FDA investigation, pitting him against the powerful tobacco industry. The FDA's investigation resulted in tobacco executives admitting nicotine's addictive qualities, and lawsuits filed by state attorneys general resulted in a landmark settlement of more than $360 billion. Nearly a decade later, a law was passed in 2009 giving the FDA the authority to regulate tobacco products.

His approach to the top FDA job led some conservatives to call for his ouster, believing Kessler was enforcing too much government regulation, the New York Times reported. His crackdown on vitamin manufacturers' unsubstantiated health claims turned then-GOP Sen. Orrin Hatch of Utah, who was his former boss and had backed him for FDA chief, into a top critic.

Kessler stepped down from the role of FDA commissioner in February 1997 and was named dean of Yale medical school later that year.

Kessler is currently a professor of pediatrics and epidemiology and biostatistics at the University of California, San Francisco. He also served as chair of the boards of the Center for Science in the Public Interest, a consumer advocacy group, and the Elizabeth Glaser Pediatric AIDS Foundation.