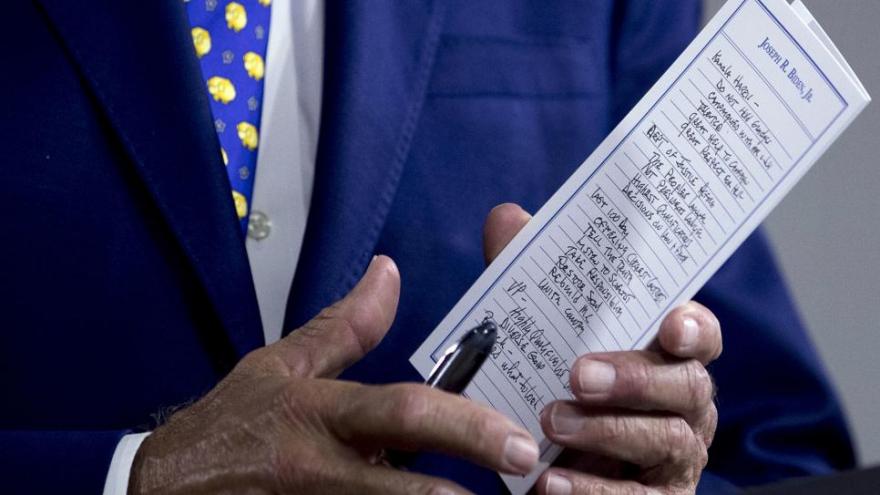 Presumptive Democratic nominee Joe Biden on Tuesday was photographed holding handwritten notes with Sen. Kamala Harris' name at the top along with a set of talking points about her, fueling fresh speculation about the California Democrat's standing as a vice presidential running mate.

(CNN) -- Presumptive Democratic nominee Joe Biden on Tuesday was photographed holding handwritten notes with Sen. Kamala Harris' name at the top along with a set of talking points about her, fueling fresh speculation about the California Democrat's standing as a vice presidential running mate.

The notes, which were photographed at a speech in Wilmington, Delaware, feature Harris' name followed by five talking points: "Do not hold grudges," "Campaigned with me & Jill," "Talented," "Great help to campaign" and "Great respect for her."

The Biden campaign declined to comment to CNN on Tuesday night.

The prominence of Harris on Biden's notes follows a Politico story in which former Sen. Chris Dodd of Connecticut, a member of Biden's team vetting potential vice presidential picks, is reported as being critical of her.

His criticism stems from Harris' attack on the former vice president in a June 2019 Democratic primary debate. She criticized Biden for having touted his "civil" working relationship with segregationist senators, and launched a scathing and personal attack on his opposition to federally mandated school desegregation busing.

"Vice President Biden, I do not believe you are a racist, and I agree with you, when you commit yourself to the importance of finding common ground," Harris had said on the debate stage. "But I also believe -- and it's personal -- it was actually hurtful to hear you talk about the reputations of two United States senators who built their reputations and career on the segregation of race in this country."

"It was not only that ... ," she continued. "There was a little girl in California who was part of the second class to integrate her public schools and she was bused to school every day. That little girl was me."

Her attack stunned Biden, who noted that she'd had a good relationship with his son, former Delaware Attorney General Beau Biden, before he'd died. And it rocked the Democratic race, sending Harris into the primary's top tier of contenders and damaging Biden. Harris could not sustain that momentum, and she dropped out before the Iowa caucuses.

But with Harris now widely seen as a top contender for the vice presidential nomination, one key question is whether the wounds from that attack have healed.

Dodd, according to Politico's account, reportedly told a longtime Biden supporter that when he asked Harris about that debate-stage attack, "She laughed and said, 'That's politics.' She had no remorse."

Biden said after his speech in Wilmington on Tuesday that he will choose his vice presidential running mate next week.

Asked by CNN whether he will meet in person with finalists for the role, Biden said, "We'll see."