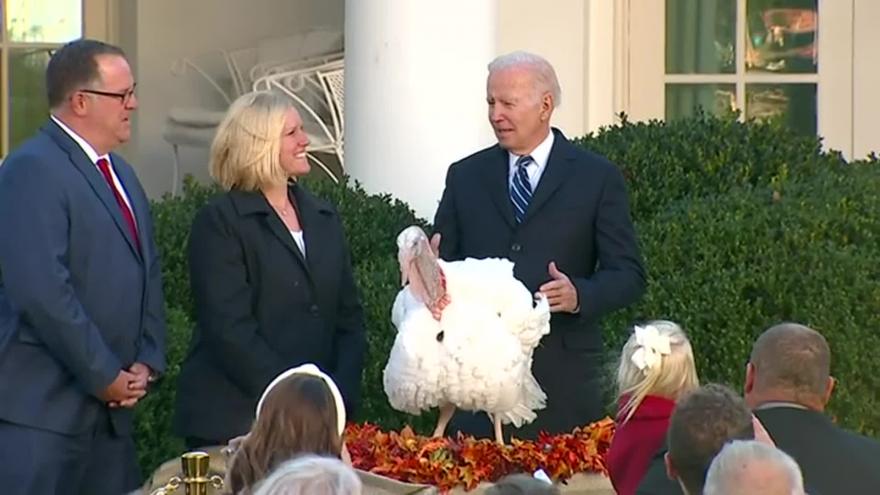 In a joke-filled ceremony on the White House's Rose Garden, Biden pardoned the two birds, sparing them both from becoming a presidential meal this holiday season.

"Eventually, Peanut Butter and Jelly were selected based on their temperament, appearance and, I suspect, vaccination status," the President joked. "Yes, instead of getting basted, these two turkeys are getting boosted."

Biden said Peanut Butter and Jelly were "two names I couldn't agree on more," adding, "I have to admit to you, my wife doesn't like me to admit it -- that's what I like for lunch."

The President also took a moment during the ceremony to acknowledge the Covid-19 pandemic and a return to Thanksgiving traditions with loved ones.

"In all seriousness, it's important to continue traditions like this to remind us how from the darkness, there's light and hope and progress and -- that's what this year's Thanksgiving, in my view, represents," the President said. "So many of us will be gathering with our loved ones for the first time in a long time. And we'll be reconnecting with traditions, with our tables and our hearts full of grace and gratitude for everyone who made it possible."

Biden thanked scientists and front-line workers who developed and administered the Covid-19 vaccine, as well as essential workers, faith leaders and the workers who grow and harvest the food on Americans' tables.

The outdoor ceremony, which was attended by White House staffers' families and children, comes two weeks after the US Centers for Disease Control and Prevention endorsed a recommendation to vaccinate children ages 5-11 against Covid-19.

Following the ceremony, they will retire to their home state at Purdue University's Animal Sciences Education and Research Farm.

The Indiana-raised birds flocked to Washington, DC, this week, staying at the luxe Willard Hotel and attending a news conference on Thursday with the National Turkey Federation ahead of their White House appearance.

"Raising the presidential turkey flock has really been a lot of fun this year. As we all know, with another year of uncertainties with the pandemic, this project has really been something to look forward to," grower Andrea Welp said on Thursday.

The National Turkey Federation became the official turkey supplier to the first family in 1947 and the formal turkey presentation ceremony has been around since President Harry Truman. Truman was the first to accept a turkey from them -- however, he did not spare the bird.

Rumors of turkey pardons go back in presidential history as far as the Lincoln administration. Folklore has it that Lincoln's young son asked his father to spare a pet turkey that was supposed to be part of their Thanksgiving dinner.

The first documented turkey pardon was given by President John F. Kennedy in 1963, though it didn't catch on right away. Even though President Gerald Ford pardoned President Richard Nixon, neither one of them decided to officially pardon any turkeys.

Biden's decision to go on with the tradition comes on a particularly momentous day.

Early Friday morning, the President underwent his annual physical at Walter Reed Medical Center. Biden temporarily transferred power to Vice President Kamala Harris while he was under anesthesia during the colonoscopy portion of his exam.

And on Friday afternoon, just hours before the pardon was supposed to take place, Kyle Rittenhouse was found not guilty of first-degree intentional homicide and four other charges on Friday in connection to the fatal shooting of two people and wounding of another during last year's unrest in Kenosha, Wisconsin.

While the Biden administration notched a major legislative win this week with the signing of his infrastructure bill into law, the pardon comes amid inflation at the Thanksgiving table.

A new survey by the American Farm Bureau Federation found that Thanksgiving dinner will cost 14% more for Americans this year, with several factors leading to the increased pricing, including more Americans expected to cook at home this year and other economic disruptions. While that survey found that turkey is up 24% since last year, that price is dependent on when the poultry was purchased.

Agriculture Secretary Tom Vilsack said in a statement Wednesday that "the good news is that the top turkey producers in the country are confident that everyone who wants a bird for their Thanksgiving dinner will be able to get one, and a large one will only cost $1 dollar more than last year."