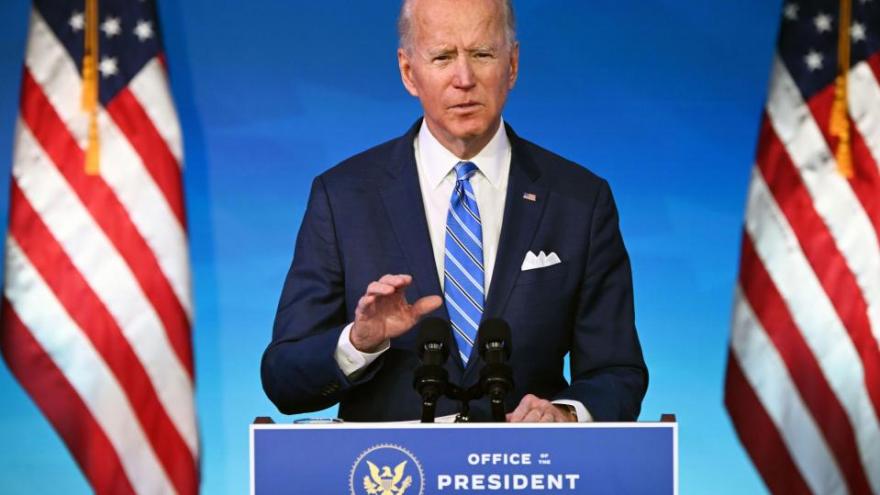 President-elect Joe Biden, seen here speaking in Wilmington, Delaware, on January 14, will outline a plan on January 15 to administer Covid-19 vaccines to Americans.

(CNN) -- President-elect Joe Biden on Friday outlined a plan to administer Covid-19 vaccines to the US population that includes opening up eligibility to get more people vaccinated, creating more vaccination sites and taking measures to increase the supply and distribution of the vaccines.

His plan includes mobilizing more personnel to support the vaccination effort, launching a public education campaign to address those hesitant to take the vaccine and focuses on ensuring equitable access to the vaccine across the country.

"Our plan is as clear as it is bold: Get more people vaccinated for free. Create more places for them to get vaccinated. Mobilize more medical teams to get the shots in people's arms. Increase supply and get it out the door as soon as possible," Biden said during an event in Wilmington, Delaware.

Biden described the vaccine rollout in the United States under President Donald Trump as a "dismal failure thus far."

"If you were to ask most people today, they couldn't tell you who exactly is getting vaccinated. What they do know is there are tens of millions of doses of vaccine sitting unused in freezers around the country, while people who want and need the vaccine can't get it," Biden said.

The President-elect continued: "We'll fix the problem by encouraging states to allow more people to get vaccinated beyond health care workers and move through those groups as quickly as they think we can."

Biden cautioned that "things will get worse before they get better," and said that any policy changes implemented by his administration "are going to take time to show up in the Covid statistics."

But the President-elect said he was "convinced" that his administration could meet his goal of administering 100 million vaccine shots in his first 100 days in office.

"This is a time to set big goals to pursue them with courage and conviction, because the health of the nation is literally at stake," Biden said.

While Biden has set out ambitious goals for ramping up the supply of vaccine and the speed of vaccinations, he has offered few of the nitty-gritty details on how his administration intends to achieve them.

For instance, it's still unclear how Biden might use the Defense Production Act in a way that could ramp up vaccine supply, rather than the production of ancillary supplies like syringes.

His transition team has not provided a target number for federalized vaccination sites, except to say that "thousands" will be set up. And Biden's team has offered few details on how it plans to track states' progress to ensure Americans are being vaccinated at a pace that keeps up with Biden's goal of 100 million vaccine shots in 100 days.

A fact sheet provided by his transition team says Biden's plan "encourages states to open up eligibility beyond healthcare workers and long-term care facility residents and staff, to include frontline essential workers like teachers, first responders, grocery store employees, and anyone who is 65 and older."

Health care workers and residents of long-term care facilities are the first in line for the coronavirus vaccines, as recommended by vaccine advisers to the CDC. Next in line are older adults, ages 75 and older, and "frontline essential workers," including first responders, the advisers recommended.

The President-elect will use federal funds to create new community vaccination centers across the country and launch mobile vaccination clinics and provider partnerships to reach under-served urban areas and rural communities.

His plan will make vaccines available in pharmacies and increase the capacity at chain and independent pharmacies across the nation. As Biden has pledged in the past, he will use the Defense Production Act to maximize the manufacturing of the vaccine and increase the supply.

"President-elect Biden's plan will release the vast majority of the vaccines when they are available, so more people can get vaccinated quickly, while still retaining a small reserve for any unforeseen shortages or delays," the fact sheet reads.

Biden will aim to release nearly every available dose of the coronavirus vaccine when he takes office, CNN previously reported. The Trump administration's strategy originally was to hold back half of US vaccine production to ensure second doses are available, but it has since reversed course and said it would distribute reserved second doses immediately, effectively adopting Biden's approach after disparaging it.

Biden's plan will increase the public health workforce to support the vaccination effort, which includes allowing for additional professionals to administer vaccines and encouraging states to expand the scope of practice laws and waive licensing requirements where appropriate. The President-elect will also mobilize a public health jobs program to support the response to the pandemic.

The President-elect's plan would reimburse state deployments of the National Guard to support vaccinations, and would provide a cost match for state and local emergency costs through the Federal Emergency Management Agency.

Biden has said his first priority when he takes office next week is to vaccinate Americans against the virus as the pandemic continues to devastate the nation.

The President-elect on Thursday outlined a $1.9 trillion emergency legislative package to fund his nationwide vaccination effort and provide direct economic relief to Americans who are struggling amid the coronavirus pandemic.

The American Rescue Plan calls for investing $20 billion in a national vaccination program, including launching community vaccination centers around the country and mobile units in difficult-to-reach areas. It would also increase federal support to vaccinate Medicaid enrollees.

The proposal also includes $1,400 stimulus checks, more aid for the unemployed, those facing food shortages and those facing eviction. It includes more money for child care and child tax credits, additional support for small businesses, state and local governments, and increased funding for vaccinations and testing.

The President-elect on Thursday did not detail how he plans to move this massive proposal through Congress, in which Democrats will have narrow House and Senate majorities, but both congressional Democratic leaders voiced support for the proposal and pledged to help turn it into law.

Biden's presidential transition team on Friday announced that Dr. David Kessler, a former head of the US Food and Drug Administration, would lead federal Covid-19 vaccine efforts for the incoming administration. Kessler will help lead Operation Warp Speed, the federal government's vaccine program that began under Trump, to speed up vaccine development and distribution.

The current Operation Warp Speed team under Trump has also encouraged states to broaden their vaccination guidelines beyond what the Centers for Disease Control and Prevention has recommended. Only about 40% of doses of vaccine distributed have made it into people's arms, according to the latest CDC data released Friday.

More than 390,600 Americans have died from the virus as of Friday afternoon, according to Johns Hopkins University. On Friday, the CDC reported 31 million doses of vaccine have been distributed and 12 million doses have been given to people.

The President-elect has received both doses of the Pfizer/BioNTech Covid-19 vaccine, and was administered both shots live on camera while reassuring the American public of its safety. He received the second dose earlier this week.

Vice President-elect Kamala Harris has received the first dose of the Moderna Covid-19 vaccine, and also did so on camera.