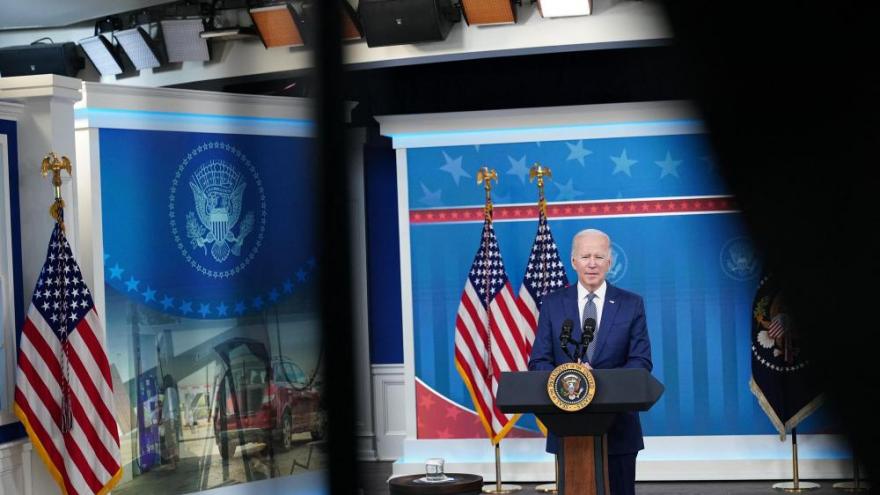 President Joe Biden pictured on December 1, will detail the administration's nine-pronged plan in remarks at the National Institutes of Health, a day after officials confirmed the first recorded case of the Omicron variant in the United States, in California.

Biden's multi-pronged approach puts a heavy emphasis on expanding vaccinations to the remaining Americans who have resisted getting shots, and to provide boosters to the now-eligible population of all adults. He's also changing rules on international travel to require tests closer to arrival in the United States, and requiring insurance companies to pay for at-home tests.

But he is stopping short of imposing shutdowns on schools or businesses, ruling them out for now as he works to maintain the country's economic recovery.

"It doesn't involve shutdowns or lockdowns, but widespread vaccinations, and boosters, and testing and a lot more," Biden said, hoping to put forward a show of resolve as the pandemic continues to dampen his political standing.

He acknowledged a likely rise in cases over the coming weeks, as weather turns colder in much of the country and people begin to gather more indoors. He noted his proposed mandate for vaccinations among large employers is currently tied up in court, forestalling any new requirements in his winter strategy.

And he lamented the politicization of anti-Covid measures that are recommended by public health experts, saying it was a "sad, sad commentary" that steps like mask wearing and vaccinations had become subject to ugly divisiveness.

"My plan I'm announcing today pulls no punches in the fight against Covid-19," he said. "A plan, I think, that should unite us."

Biden's speech, delivered from the campus of the National Institutes of Health in Maryland, came as cases of the worrying new Omicron variant begin surfacing in the United States and countries around the world impose tight new restrictions on travel and activity.

Biden touted actions like restrictions on travel from southern Africa that he said gave his administration time to prepare, and declared he would combat the new variant "with science and speed, not chaos and confusion."

But he said it was inevitable that cases would arise in the United States, preparing Americans for the continued presence of Covid for the foreseeable future.

"Experts say that Covid-19 cases will continue to rise in the weeks ahead and this winter," he said. "So we need to be ready."

Thursday was not the first time Biden has gone before the nation to lay out a new strategy for combating Covid. He has previously outlined plans to expand vaccinations and encourage boosters. Yet continued resistance to getting shots has made the work of ending the pandemic difficult, which in turn has dragged Biden's approval rating downward.

Biden was speaking the day after officials confirmed the first recorded case of the Omicron variant in the United States, in California. A second case was discovered in Minnesota on Thursday.

Biden's address was planned before the emergence of the new variant, but its discovery lent new urgency to his strategy of further expanding vaccinations and testing, including new requirements for international travel.

On Thursday, Biden announced new steps tightening pre-departure Covid-testing protocol for all inbound international travelers, requiring a negative test within one day of departure for the United States. Previously a test could be taken up to three days before entering the country.

Any foreign national who travels to the US must be fully vaccinated, though there remains no vaccination requirement for American citizens traveling via air, either globally or domestically.

The White House said earlier in the day that a vaccine requirement for domestic travel remained on the table as an option for the future.

The administration formally announced Thursday its plan to extend a mask requirement for domestic travel, originally slated to expire in January, until mid-March. The order, which had already been extended this summer, applies to travel via rail and other public transportation, and comes amid widespread reports of unruly passengers refusing to comply with mask mandates.

The continued reliance on masks comes as 43 million Americans have yet to get vaccinated. Another 100 million who did receive vaccines have yet to receive a booster shot.

Part of Biden's plan includes increasing vaccine outreach, including efforts -- in partnership with the Department of Health and Human Services, AARP and Medicare -- to ensure an estimated 100 million Americans eligible for Covid-19 vaccine boosters get them as soon as possible, including the launching of a nationwide public education campaign, town halls and offers of rides to vaccine and booster appointments for older Americans.

But in a sign the virus will not fade in the near-term, Biden also detailed new steps to increase Covid testing, including requiring private insurers reimburse the costs of at-home tests for more than 150 million Americans. In addition, community sites like health centers and rural clinics will offer free at-home tests for those not covered by private insurance, doubling a September pledge to offer 25 million free tests to community sites to 50 million tests.

The administration also unveiled steps aimed at increasing vaccination rates among children in an effort to keep schools open and protect children ages 5 and up from contracting Covid-19.

The White House says more than 4 million 5- to 11-year-olds and 15 million adolescents have been vaccinated since the shots were approved for those age groups earlier this year.

"Vaccinating our kids protects them, keeps schools open, and protects everyone around them," the White House said in a fact sheet shared with reporters Wednesday.

As part of those efforts, the administration will launch "family vaccination clinics" aimed at offering vaccines and boosters for entire families at once, including hosting "Family Vaccination Days" at participating community health centers across the country. The Federal Emergency Management Agency will also offer mobile vaccination clinics in reach hard-to-reach communities.

The administration is also issued a "Safe School Checklist" so schools can safely encourage vaccination and booster efforts and avoid outbreaks in schools through new guidance from the US Centers for Disease Control and Prevention on quarantining and testing.

In his speech, Biden announced further actions to export vaccines, including 200 million more doses in the next 100 days, accelerating delivery to high-risk countries, while ramping up vaccine manufacturing to increase global production capacity.