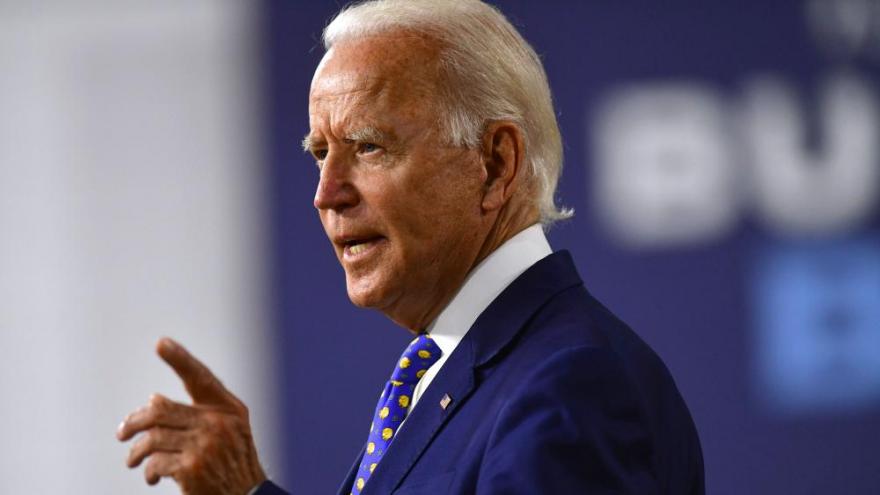 President Joe Biden on disappointing jobs report: ‘We knew this wouldn’t be a sprint, it’d be a marathon.' In this image, Biden speaks on July 28, 2020 in Wilmington, Delaware.

(CNN) -- President Joe Biden on Friday argued the US needs the kind of large-scale investments his economic proposals call for in the wake of a disappointing Friday jobs report that fell well below expectations.

"We can't let up, this jobs report makes that clear. We've got too much work to do," Biden said, speaking from the White House.

The President pitched his American Jobs Plan and American Families Plan, which together total roughly $4 trillion, as ways to kickstart the US economy and create more jobs. The plans invest heavily in infrastructure, education, child care and paid leave.

Biden rejected the idea that expanded unemployment benefits limited how many people are looking for work, saying there was "nothing measurable" that suggested that that was the case.

The US economy added only 266,000 jobs in April, which was far less than the 1 million jobs economists had predicted. Experts had forecast that the national rollout of Covid-19 vaccines and the reopening of the economy would jolt hiring.

The unemployment rate rose to 6.1% in April, up from 6% a month earlier, as more people returned to the labor force to look actively for work, the Bureau of Labor Statistics said Friday. The March jobs numbers were also revised down to 770,000 from the 916,000 that was initially reported.

Negotiations over Biden's massive economic proposals are intensifying on Capitol Hill, and Biden and senior congressional Democrats plan to make a sustained push for a bipartisan agreement on a scaled-back infrastructure proposal over the next two weeks, CNN has reported.

Next week, the President is set to hold a key meeting with Republican and Democratic leadership in the Senate and House of Representatives. Biden has also invited the lead Senate GOP negotiator, Sen. Shelley Moore Capito of West Virginia, to the White House for a separate meeting.

Biden said Friday the jobs report showed the US economy is "moving in the right direction," but there is still a long way to go.

The President touted the effects of his sweeping $1.9 trillion Covid-19 emergency relief law, saying it was designed "to get us back to where we were, but that's not nearly enough."

"We knew we were facing a once-in-a-century pandemic and a once-in-a-generation economic crisis. We knew this wouldn't be a sprint, it'd be a marathon," Biden said.

He continued: "Quite frankly, we're moving more rapidly than I thought we would."

The President said the US is still "digging out of an economic collapse," and that the $1.9 trillion Covid-19 emergency relief law he signed into law was designed to help the nation "over the course of a year."

"We never thought that after the first 50 or 60 days everything would be fine," Biden said.

The President said Friday's jobs report underscored "how vital the actions we're taking are" -- from stimulus checks to funding for small businesses, child care and school reopenings, which were all part of his sweeping American Rescue Plan.

"Our efforts are starting to work, but the climb is steep and we still have a long way to go," Biden said.

Biden noted not all of the programs that were passed as part of the American Rescue Plan have been fully implemented, and that the $1.9 trillion in funding would continue to be doled out.

Treasury Secretary Janet Yellen said Friday the jobs report "underscores the long haul climb back to recovery" but said the US has made "remarkable progress."

Yellen said she believed the US would reach "full employment" next year, and warned that one month's data shouldn't be interpreted on its own as an underlying trend.

"We need to take bold action to Build Back Better from this crisis by investing in our nation, our workers and our families," Pelosi said in a statement.

She continued: "House Democrats are already at work developing strong jobs legislation, which will create millions of good-paying jobs revitalizing our nation's infrastructure and laying the foundation for a generation of economic growth."

As negotiations on Biden's economic proposals heat up, the President on Thursday suggested he was open to a corporate income tax rate between 25% and 28% to pay for his infrastructure and jobs proposal. The statement was the most concrete view he's given to date on his negotiating position.

The President on Thursday traveled to Louisiana as part of his "Getting America Back on Track" tour to make the case that his economic proposals would benefit middle-class Americans and provide the necessary funding to rebuild America following the devastating coronavirus pandemic.