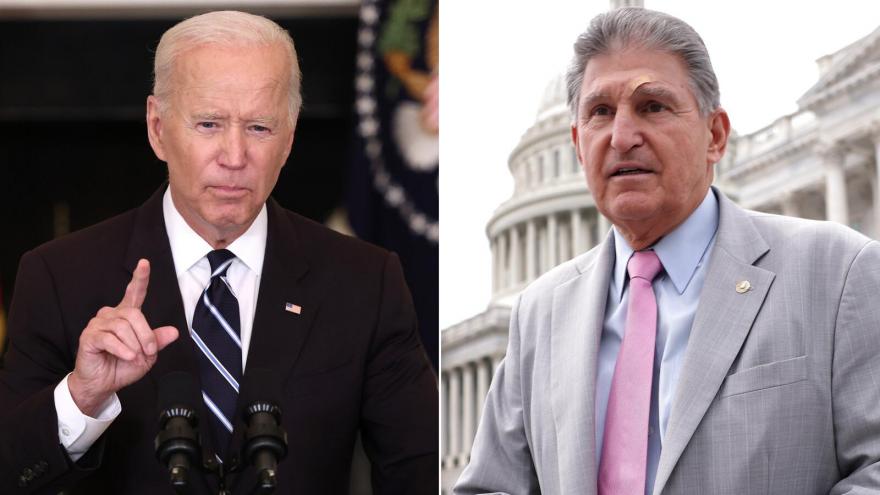 President Joe Biden said December 10 he doesn't know if he can get West Virginia Democratic Sen. Joe Manchin on board to support his social safety net bill, but is expected to speak with him about the legislation next week as the Senate moves closer to its holiday recess.

(CNN) -- President Joe Biden said Friday he doesn't know if he can get West Virginia Democratic Sen. Joe Manchin on board to support his social safety net bill, but is expected to speak with him about the legislation next week as the Senate moves closer to its holiday recess.

Asked whether he could lock down Manchin's support given the West Virginian's inflation worries, Biden said, "Well, I don't know the answer to that. I'm going to be talking to him (at) the beginning of the week."

A vote of support from moderate Manchin on the Build Back Better bill -- a $1.9 trillion Biden-backed plan on spending focused on the nation's social safety net, reducing Americans' child care and health care costs, and climate change -- is key to moving Democrats closer to getting the legislation to Biden's desk and signed into law.

The President, speaking to reporters on Friday afternoon, reiterated that the social safety net plan ultimately "has a negative impact on inflation. It doesn't raise inflation."

"But that's hard for people to think about right now. Because inflation is up and there's a direct correlation in most people's mind -- 'Why is there inflation? Well, the government's spending money,'" he continued. "Well, that's not the reason for the inflation. The reason for inflation is that we have a supply chain problem that is really severe, and is causing a significant increase in prices in things that in fact are hard to get access to."

White House press secretary Jen Psaki said Friday that during next week's discussion with Manchin, she expects "the President will convey much of what we've what we've conveyed publicly -- that while we've seen costs increase in some areas, and we've seen a ... move in a good direction in some areas as well, what we need to do now is think about what we're going to do about rising costs."

"I think the case he will make is that this is exactly the time to pass this bill and move it forward so that we can lower costs for the American people on all of those topics, including insulin, and areas that really force American families to pinch pennies," Psaki added.

And last week, Manchin indicated that he still had a number of concerns about the legislation -- namely that budget gimmicks hide the true cost of the bill, and he's pushing to ensure it costs no more than $1.75 trillion. But he also is seeking to pare down the bill, which passed the House last month, in a number of other areas -- including paid family leave, a methane fee on emissions from energy producers and a Medicare expansion to cover hearing costs. And he's seeking changes to some of the provisions in the tax title of the bill.

Senate Majority Leader Chuck Schumer said Thursday that the Senate is "on schedule" to bring the legislation to the floor before Christmas. But getting the bill done by Christmas remains a heavy lift, given that the process for adjustments to the legislation could easily derail the timeline.

News of next week's Manchin-Biden meeting follows the recent release of the Congressional Budget Office's revised analysis for the social safety net plan.

The revised analysis on the plan is based on a Republican request to see how much the bill would cost if a series of provisions -- including the child tax credit expansion -- were extended for the full 10 years. It is a hypothetical analysis that goes beyond what the actual legislation is proposing.

The score estimates that the hypothetical version of the legislation would "increase the deficit by $3 trillion over 2022 to 2031." The analysis assumes that any extension wouldn't be paid for.

The current bill does not include such extensions to the provisions and Biden has said that prospective extensions of the bill's programs would be paid for.