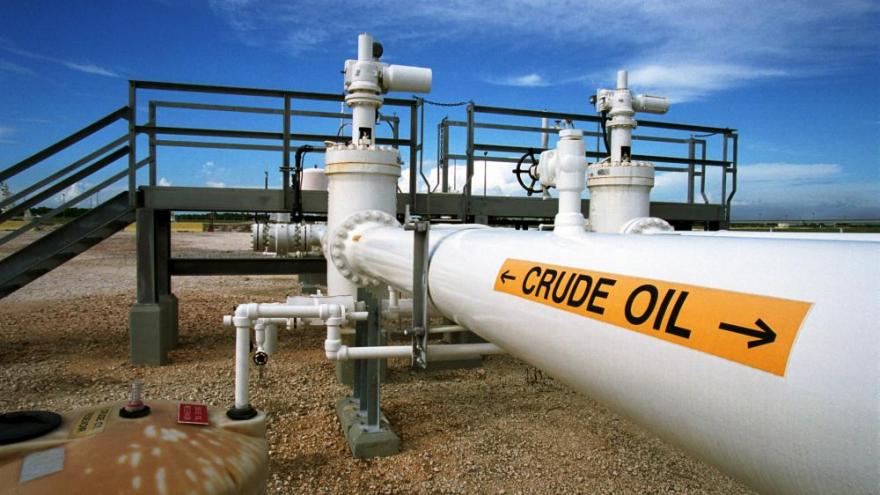 A pipeline carries oil September 20, 2000 at the Federal Strategic Petroleum Reserve facility known as Big Hill near Beaumont, Texas. President Joe Biden was noncommittal on ordering a Strategic Petroleum Reserve release in an attempt to address rising crude oil prices after the OPEC+ coalition rejected calls from the US and other big oil consuming nations to increase output by more than planned in December.

(CNN) -- President Joe Biden on Saturday was noncommittal on ordering a Strategic Petroleum Reserve release in an attempt to address rising crude oil prices after the OPEC+ coalition rejected calls from the US and other big oil consuming nations to increase output by more than planned in December.

"I'm not anticipating that OPEC would respond, that Russia and/or Saudi Arabia would respond," Biden told reporters at the White House. "They're gonna pump some more oil. Whether they pump enough oil is a different thing."

The White House has accused OPEC and its allies of putting the global economic recovery at risk by refusing to pump more oil, something that could prompt the administration to attempt to address rising prices on its own by tapping into the SPR, which can hold up to 714 million barrels of crude and is the world's largest backup oil supply.

However, a release from the SPR, which is designed to protect the nation against a major disruption in oil supplies, would likely only provide modest, temporary relief from higher prices at the pump.

Energy Secretary Jennifer Granholm suggested last month that tapping into the SPR was under active consideration, something the department later walked back by clarifying that there was no "immediate plan" to do so. Only the US president can order crude stored in those reserves to be released.

"There are other tools in the arsenal that we have to deal" with, Biden said, adding that he is dealing with other countries. The President said "at an appropriate time," he will discuss how to "get more energy" flowing.

Despite pleas from the White House, OPEC and its allies have so far refused to significantly increase supply after agreeing to record production cuts of nearly 10 million barrels per day. Most of those emergency cuts remain in place, giving the oil market time to heal and work off the surplus caused by the coronavirus pandemic.

There's also some skepticism about whether OPEC+ truly has the ability to sharply ramp up production after years of slower investment.

There's a "real question mark about which countries can really add more barrels at this point," Helima Croft, head of global commodity strategy at RBC Capital Markets, wrote to clients in a note earlier this week. Croft pointed to how OPEC+ has "underdelivered" on its planned output hikes for several months in a row.