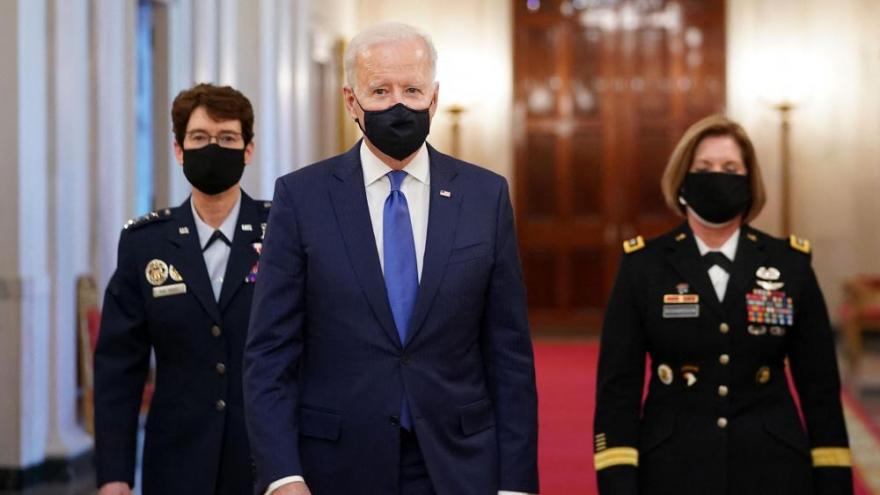 (CNN) -- President Joe Biden on Monday announced he has nominated two female generals to positions as 4-star combatant commanders after their promotions had been delayed under the Trump administration.

Biden, during remarks on International Women's Day at the White House on Monday, called Van Ovost and Richardson "two outstanding and eminently qualified warriors and patriots."

"Each of these women have led careers demonstrating incomparable skill, integrity, and duty to country. And at every step, they've also helped push open the doors of opportunity to women in our military, blazing the trail, a little wider, a little brighter, for all proud women following their path and looking to their example," the President said.

Two defense officials told CNN on Monday that the women's nominations and other male officers nominations for promotion were withdrawn by the Trump Pentagon because they were being submitted too early for congressional consideration.

CNN previously reported the women's promotions to 4-star generals had been delayed by Pentagon officials until after the 2020 presidential election out of fear of "turmoil" from President Donald Trump's White House.

A senior official close to former Defense Secretary Mark Esper told CNN's Jake Tapper last month that the slate of officers numbered a half dozen, and that there were concerns others at the White House might try to hold them up for one reason or another -- including the fact that relations between Esper and Trump, and between the Pentagon and White House, were in bad shape.

On Monday, Biden noted that Van Ovost, a first generation American, flew Air Force Two when he served as vice president during the Obama administration, as well as highlighted Richardson's work as commanding general of US Army North, coordinating the military's medical personal deployed to help with the coronavirus response.

The President also spoke on the need to eliminate sexual assault and harassment against women in the military, calling it "nothing less than a threat to our national security."

"This is going to be an all hands on deck effort under my administration to end the scourge of sexual assault in the military," he said.

"You know that the diversity of our nation makes us stronger and diversity in our military ranks makes us better at defending the American people," Austin said.

Vice President Kamala Harris also praised the nominations in brief remarks, saying, "While it has only been five years since all combat jobs have opened to women, women have been in the line of fire risking their lives to protect our nation long before that."