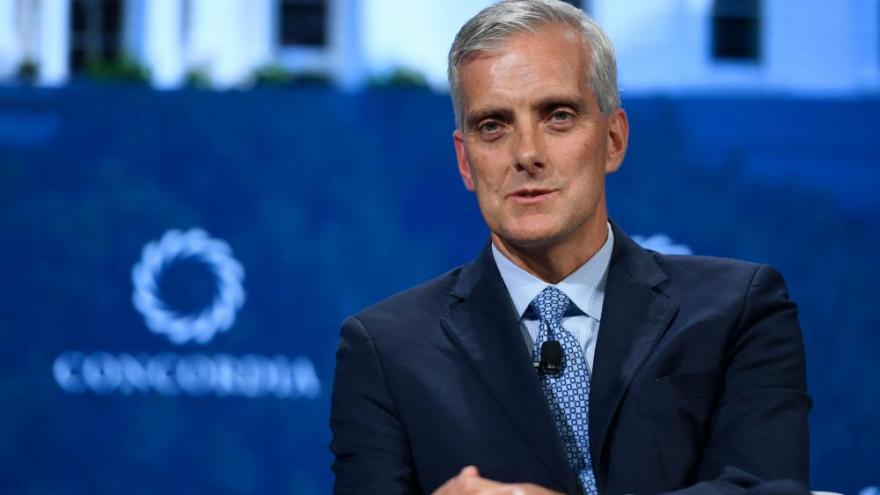 President-elect Joe Biden is poised to tap Denis McDonough, seen here in 2018, to lead the Department of Veterans Affairs, a person familiar with the decision says, adding the longtime chief of staff to former President Barack Obama to his new Cabinet.

As VA secretary, McDonough would be inheriting one of the most challenging agencies in the government, so Biden was looking "for a seasoned hand, who knows the government well," a person familiar with the decision says.

McDonough's announcement is the latest example of how Biden is turning to a trusted set of advisers to surround him in his new administration. The President-elect on Thursday also named several other Cabinet nominees and top administration officials, including: Tom Vilsack, the former agriculture secretary under President Barack Obama, for agriculture secretary; Marcia Fudge, an Ohio congresswoman, for secretary of Housing and Urban Development; and Susan Rice, a former national security adviser under Obama, to lead the White House Domestic Policy Council.

Several veterans groups were hoping Biden would choose a veteran of the Iraq or Afghanistan wars. McDonough did not serve in the military, but rather has long experience navigating bureaucracies on Capitol Hill and at the White House.

McDonough, a native of Minnesota who served as chief of staff during Obama's entire second term, also worked as deputy national security adviser. He developed a close relationship with Biden during both positions. He is a devout Catholic, a bond he also shares with Biden.

McDonough could join other prospective Cabinet nominees on Friday in Wilmington, Delaware, but timing is still being worked out.

Politico was first to report the McDonough selection.

Prior to his role as White House chief of staff, McDonough served as assistant to the president and principal deputy national security adviser from September 2010 until February 2013. He also chaired the National Security Council's Deputies Committee, which is responsible for formulating the administration's national security and foreign policy.

McDonough also previously served as the chief of staff of the national security staff and as the deputy national security adviser for strategic communications. He was a senior foreign policy adviser during Obama's 2008 presidential campaign and then on the transition team.

McDonough served as a top staffer on Capitol Hill before working in the Obama White House, including as a foreign policy adviser for then-Senate Democratic Leader Tom Daschle. Since leaving the White House, McDonough has joined the Markle Foundation, which aims to create a labor market that allows all Americans to succeed in the digital economy, as a senior adviser.

Former Veterans Affairs Secretary Robert McDonald praised Biden's choice, and said he had worked with McDonough when he was leading the department back during the Obama administration.

"His leadership and support as then White House Chief of Staff was very helpful to what we achieved while I was Secretary. He is a crisis-tested leader of character with great knowledge, skills, and experience in using the levers of government. He is also an extremely empathetic leader, especially for service members and their families," McDonald said in a statement.

He said he had known McDonough since 2014, when McDonald was confirmed as VA secretary, and that the two had become close friends.

McDonald continued, "While working in the White House he visited front line troops in the Middle East and often visited Walter Reed Medical Center. I think he will be a terrific Secretary of the Department of Veterans Affairs, and I will do all I can to support him and VA."