Biden: No family members will be involved in any government decisions 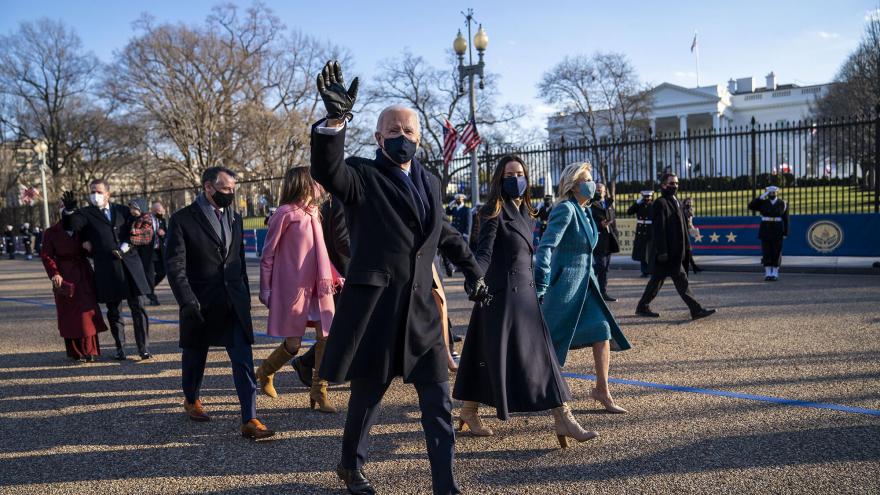 President Joe Biden, First Lady Jill Biden and family, walk in front of the White House during a Presidential Escort to the White House, Wednesday, Jan. 20, 2021 in Washington.

(CNN) -- President Joe Biden vowed that no one in his extended family will have sway over government decisions in an interview with People magazine published Wednesday.

"We're going to run this like the Obama-Biden Administration," he said of ethics requirements pertaining to government appointees' family and friends to avoid the semblance of wrongdoing.

"No one in our family and extended family is going to be involved in any government undertaking or foreign policy," he added. "And nobody has an office in this place. They always have access to Pop and Nana but nobody (will have an office)."

Biden shared an anecdote of previously rejecting personal benefits that could have been paid by the government, professing his commitment to steering clear of impropriety.

"I remember years ago an accountant said, 'You know, you can charge (the Senate) part of the gas you use in the vehicle at your home.' And I said, 'No,' " Biden said. "Here's how I look at it: The foul line is 15 feet away from the basket. Never get me closer than 17 feet, because it really is a matter of the public trust."

The President's comments come after the White House said last Thursday that it is its policy to not let businesses imply they have Biden's support or endorsement but declined to comment on the record about an advertisement in which Frank Biden touted his relationship to his brother. The ad for a Boca Raton, Florida, law firm, for which Frank Biden is an adviser, ran in a local paper on Inauguration Day.

White House press secretary Jen Psaki on Friday maintained that Biden is "committed to ensuring we have the most ethically vigorous administration in history" but declined to detail any recourse taken in the wake of the ad, saying, "I'm not going to get into private conversations between the President and his family members."

Biden faced scrutiny throughout the presidential campaign over his son Hunter Biden's business dealings, which included being on the board of a Ukrainian natural gas company. Hunter Biden asserted in a 2019 interview with ABC News that he "did nothing wrong at all" but he admitted that holding the position while his father was vice president showed "poor judgment." Then-President Donald Trump, his attorney Rudy Giuliani and his Republican allies used questions about Biden's foreign business ties to characterize Biden's family as corrupt. There is no evidence of wrongdoing by either Joe or Hunter Biden.

The White House's stated policy of not permitting the use of Biden's name for commercial activity stands in contrast to Trump's frequent use of the trappings of office to promote his own business interests, setting up the appearance of numerous conflicts of interest. Additionally, several of Trump's family members served as his advisers, including his daughter Ivanka Trump and son-in-law, Jared Kushner.

Biden also discussed Trump's upcoming impeachment trial in the Senate during the interview published Wednesday, predicting that not enough Republicans would support impeachment to convict the former President but expressing support for the process as a necessary Senate duty.

"He was impeached by the House, and it has to move forward; otherwise it makes a mockery of the system," Biden said of Trump. "It's probably not likely to get 17 Republicans to change their view and convict on impeachment, but I think it's important that there be certain basic standards."

He added, "I'm not looking for any retribution. My job is to try to heal the country and move us forward, because I think we have so many opportunities as a country."

Biden's comments echoed similar remarks he made to CNN last week, when he said impeachment "has to happen." He acknowledged the effect it could have on his legislative agenda and Cabinet nominees but said there would be "a worse effect if it didn't happen."

He told CNN he believed the outcome would be different if Trump had six months left in his term but that he didn't think 17 Republican senators would vote to convict the former President.

"The Senate has changed since I was there, but it hasn't changed that much," Biden said to CNN.