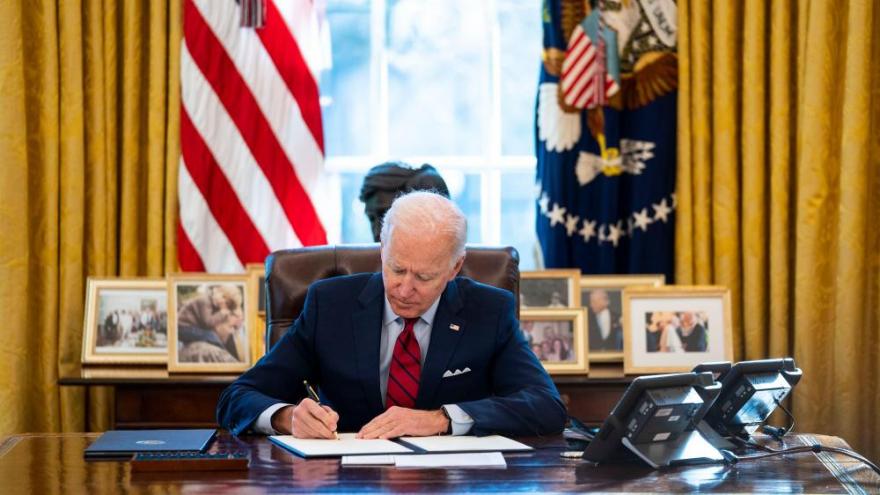 (CNN) -- The Biden administration took steps Friday to reverse one of the most controversial health care moves of President Donald Trump: Allowing states to require Medicaid recipients to work in order to receive coverage.

It also comes as the Supreme Court is looking at whether the federal government can allow states to impose work requirements. The impact on the case is unclear.

On Friday afternoon, the Centers for Medicare and Medicaid Services started notifying states that it is determining whether to withdraw the approvals that permit them to require Medicaid recipients to work. It notes that it has preliminarily determined that such a mandate would not promote the objectives of the Medicaid program -- a key factor in the legal case.

Citing the economic and health upheaval caused by the coronavirus pandemic, the letters say that the agency is concerned about "testing policies that create a risk of a substantial loss of health care coverage in the near term." Uncertainty about the pandemic's aftermath and lingering health consequences further increase the risk and harms of coverage loss.

"Medicaid's primary objective, as set out by Congress, is to provide medical assistance in order to serve the health and wellness needs of our nation's vulnerable and low-income individuals and families, based on need, not based on one's ability to find work," an agency spokesperson said.

Also on Friday afternoon, the agency quietly removed from its website a historic 2018 guidance that invited states to submit waivers to impose work requirements.

"Very decisive action today by the Biden administration to rescind approval of Medicaid work requirements," tweeted Joan Alker, executive director of the Georgetown Center for Children and Families. "A failed policy which did nothing to promote work, but wasted taxpayer $ and caused people to lose their health insurance by tripping them up in red tape."

The Trump administration contended that requiring people to work will better their health and is therefore in keeping with Medicaid's mission. The approvals were one of its most high-profile efforts to inject conservative ideals into the Medicaid program, which provides coverage to nearly one in five Americans.

The move immediately sparked outrage, with consumer advocates arguing that it would result in thousands of people losing coverage.

Some 12 states received approval to require certain enrollees to work, volunteer, take classes or search for jobs, typically for at least 80 hours a month. The states focused in particular on low-income adults who gained eligibility in recent years through Medicaid expansion, an Affordable Care Act provision. Seven additional states are awaiting approval.

The mandate is not actually in effect anywhere, largely because of legal challenges. Kentucky withdrew its waiver in 2019 after Gov. Andy Beshear, a Democrat, was elected.

About 18,000 people were stripped of their insurance in Arkansas -- the only state to fully implement the rules before being stopped by a federal judge -- within a few months of the mandate taking effect.

The ruling said that "the primary objective of Medicaid is to provide access to medical care" and that the statue makes no mention of alternative objectives, such as "improving health outcomes," as the administration cited in its approvals.

The Supreme Court agreed to take the Arizona and New Hampshire cases in December, with oral arguments scheduled for March 29. What happens next is unclear since the Biden administration has not yet rescinded the approvals.

"If they can move more quickly to withdraw these waivers, the cases will be moot," said University of Michigan law professor Nicholas Bagley, who noted that if the cases continue and the Supreme Court upholds the approvals, a future administration could reimpose work requirements.