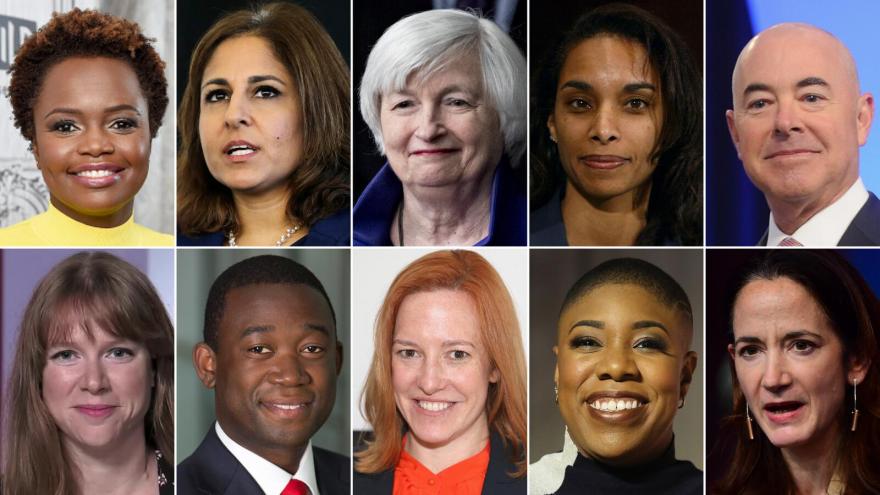 (CNN) -- President-elect Joe Biden has repeatedly promised to build a government that "looks like America." He's not wasting any time in delivering on that front.

Biden has moved quickly to name a diverse group to key White House and Cabinet posts.

On Sunday night, he unveiled an all-female senior communications staff and is expected to roll out a diverse group to lead his economic team this coming week.

The incoming administration is taking shape as the outgoing one has sought to undermine both its legitimacy and ability to deliver on many of Biden's campaign pledges. But the President-elect's early picks are, in themselves, a promise kept -- and provide a stark contrast to those of President Donald Trump, who, despite his appointment of women and minorities to some key positions, assembled a largely White and male group during his nearly four years in office. The heavy presence of Obama alumni in Biden's team also signals continuity from the last Democratic administration.

Biden touted his communications hires in a statement on Sunday night, saying they would "bring diverse perspectives to their work and a shared commitment to building this country back better."

On Monday, Biden is set to formally unveil a list of people he's planning to nominate to key economic roles, including a number of nominees who would represent historic firsts if confirmed by the Senate.

Chief among them is Janet Yellen, the President-elect's expected choice to head the Treasury Department. Already the first woman to have chaired the Federal Reserve, Yellen would carry the same distinction if the Senate confirms her as Biden's Treasury secretary.

Biden's set to nominate Adewale "Wally" Adeyemo to serve under Yellen as the deputy Treasury secretary. If confirmed, Adeyemo, the current president of the Obama Foundation in Chicago, would be the first Black person to hold that powerful position.

Biden is also planning to name Neera Tanden to lead the Office of Management and Budget, two people familiar with the appointment said. The chief executive of the Center for American Progress, a liberal think tank, and a former top aide to Hillary Clinton, Tanden would be the first woman of color to oversee the agency. In tapping Tanden, Biden risked grumbles from some in the progressive wing of the Democratic Party, with whom she has sparred -- mostly over Twitter, where she is an active combatant -- over the past four years.

But the first round of pushback against Tanden's nomination came not from the left, but from the communications director for Republican Sen. John Cornyn of Texas.

"Neera Tanden, who has an endless stream of disparaging comments about the Republican Senators' whose votes she'll need, stands zero chance of being confirmed," Drew Brandewie tweeted on Sunday night.

The selection of Cecilia Rouse, a Princeton economist, to lead the Council of Economic Advisers, is less likely to set off fireworks on social media, but it is a historical marker just the same. Rouse will become the first woman of color to chair the council.

Last week, Biden announced several other administration picks, including the first woman to lead the US intelligence community, in Avril Haines, and Alejandro Mayorkas, who would be the first Latino and immigrant to helm the Department of Homeland Security.

In addition to Psaki and Bedingfield, Biden also announced on Sunday that Karine Jean-Pierre, a senior adviser on the Biden campaign who later served as chief of staff to Harris, will serve as principal deputy press secretary.

Jean-Pierre is a progressive favorite and former chief public affairs officer at MoveOn.org, the liberal activist hub. Symone Sanders, who was a senior adviser on Biden's campaign in 2020 after serving as a national press secretary for Sen. Bernie Sanders' 2016 presidential campaign, will join the White House as a senior adviser and chief spokesperson for Vice President-elect Kamala Harris.