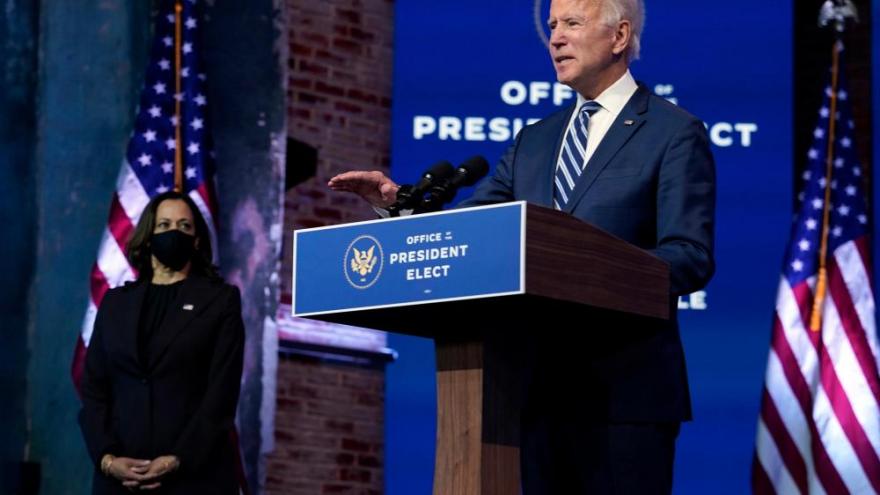 (CNN) -- Joe Biden's transition team on Tuesday announced the teams of people who will work to prepare the incoming administration to take control of the federal government, even as outgoing President Donald Trump and his administration fight the election results and decline to give access to the incoming President-elect's team.

The announcement comes as Biden looks to project confidence about the work his transition team can do without Trump conceding the race or taking the required steps to begin the process of transitioning power from one administration to another. The first, and most important step, is a formal determination from the General Services Administration, which would unfreeze more than $6 million in funding to Biden's transition team.

The Biden transition posted the names of roughly 500 people who will work with the different government agencies -- ranging from the Consumer Financial Protection Bureau to the Department of Homeland Security and the United States Postal Service -- to their website on Tuesday. These people would, during a more traditional transition, work with career officials inside government to prepare a Biden administration to take over. But the Biden transition believes the groups can still get work done without full access.

"The agency review process will help lay the foundation for meeting these challenges on Day One," said former Sen. Ted Kaufman, one of the chairs of the Biden transition. "The work of the agency review teams is critical for protecting national security, addressing the ongoing public health crisis, and demonstrating that America remains the beacon of democracy for the world."

The transition's statement noted that while the General Services Administration waits to ascertain the results of the election, these staffers will meet with "officials from think tanks, labor groups, trade associations, and other NGOs."

"Once the GSA Administrator ascertains the results of the election, the ART members will work directly with staff in federal agencies to ensure that the incoming Biden-Harris administration is able to effectively achieve the policy goals of the President and Vice President-elect," the statement said.

Biden said on Tuesday that he was not worried about how long it was taking the Trump-led General Services Administration to ascertain the results of the election but said Trump's denial was an "embarrassment."

"We're already beginning the transition, we're well underway," Biden said. "We're going to go on in a consistent manner putting together our White House... and nothing's going to stop that."

Biden said he was not a "pessimist" and when pressed on how he would work with Republicans if they can't even accept that he won, Biden quipped, "They will."

Republicans in Washington, led by Trump and Senate Majority Leader Mitch McConnell, have declined to accept the results of the November election, giving credence to baseless claims that there was widespread fraud in the election in which Trump was defeated.

The most striking example of this came when Secretary of State Mike Pompeo responded to a question about the transition by saying there would be a "smooth transition to a second Trump administration."

Even still, Biden's transition has continued without Republican acceptance -- and in a clear sign that the world is moving on from Trump, Biden had fielded a range of calls from foreign leaders, including President Emmanuel Macron of France, Chancellor Angela Merkel of Germany, Taoiseach Micheál Martin of Ireland and Prime Minister Boris Johnson of the United Kingdom.